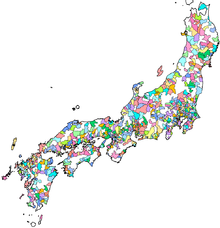 Shi ( Japanese 市 ) is a communal administrative unit in Japan . It is the official area name for a larger or large urban settlement.

Section 8 of the Japanese law on local self-government stipulates that a Shi generally has more than 50,000 inhabitants, more than 60 percent of households are in the center area and more than 60 percent of households earn their income in trade and industry or in urban commerce . Further conditions can be set by the prefectures by ordinance. A decrease in the number of inhabitants below 50,000 does not necessarily lead to the loss of Shi status. For example, Utashinai now has less than 5,000 inhabitants due to a very strong population decline.

Unlike a Machi or a Mura, a Shi does not belong to a Gun and thus corresponds to a city or urban district. Designated large cities ( seirei shitei toshi ) are divided into city districts ( Ku ). In English is Shi with City translated.

Shi means “market” in its basic meaning. The kun reading of the sign ( ichi ) is also the Japanese word for market. However, the Kun reading has no relevance for this communal unit (unlike a Machi or a Mura).

In contrast to the municipalities belonging to the district ( chō - son , Japanese readings machi and mura ), which had already existed under the same name as a subdivision of city ( ku ) and rural districts ( gun ) , the status of shi became the local when modernizing Administrations newly created in 1888/89/90 (see Church (Japan) #History ). Before that, urban districts had been organized as ku since 1878 . With the introduction of the new municipal regulations of 1888, an extensive, state-wide territorial reform was accompanied ( Meiji no daigappei ; in many places the chō-son from before 1889 correspond to the districts, ōaza , after the territorial reform). In the three largest cities in the city prefectures (-fu) Kyōto, Ōsaka and Tōkyō, the previous ku became subdivisions of the new -shi (with some changes on the borders with surrounding districts). Other ku were converted into shi - partly also with incorporations from surrounding gun -, and some shi were completely reorganized from areas previously belonging to the district. In most of the prefectures there was initially only one urban district, in a few two, in some none (e.g. in Miyazaki until 1924).

The mayor ( shichō , 市長 ) were first appointed by the Home Office from a candidate circle that was nominated by the elected city council ( shikai , 市会 , Engl. Sometimes ambiguous city council , unique city assembly ; not to be confused with the shi-sanjikai , 市参事会 , English sometimes ambiguous city ​​council , unambiguous [city] advisory council or the like, which was at the head of the city administration under the leadership of the mayor, see Magistrat (Prussia) ). In Kyōto-shi, Ōsaka-shi and Tōkyō-shi city councils were elected, but there was no independent city administration: the (appointed) governors of Kyōto-fu, Ōsaka-fu and Tōkyō-fu acted according to an exception to the city rules ( shisei tokurei) automatically as mayor of these cities. This special regulation was not lifted until 1898. As at the national and prefecture level, the originally very strict census restrictions for the city parliaments were gradually relaxed, and the three-class suffrage in shi was converted into a two-class suffrage in 1921. From 1926 onwards there was general, equal suffrage (for men). From 1926, the mayors of shi were also elected indirectly by the city council. A bill by the Hamaguchi cabinet, which would have introduced, albeit limited, women's suffrage (passive election only with the consent of the husband) at local level, was passed by the House of Representatives in 1931 , but failed in the manor house . Kyōto, Ōsaka and Tōkyō, the original three major cities, later supplemented by Yokohama, Nagoya and Kōbe, fought for some additional rights - in 1922 the ability of the prefectural governors to intervene was reduced and the rights of self-government, e.g. B. in road construction, increased - and they were already divided into city districts ( ku ; 1911 as corporations). Attempts by the six big cities in the 1930s to separate themselves completely from the prefectures as "special cities" (tokubetsu-shi) or to be placed at the prefectural level similar to an already planned Tōkyō-to failed. During the Pacific War in 1943, the original regulations governing the appointment of mayors by the Interior Ministry were restored across the country; In addition, the city of Tokyo was abolished and, unlike in some of the original tosei plans for a larger city Tōkyō at the prefectural level with more self-government, instead integrated into a prefectural administration that was now more directly linked to the central government (see Tōkyō-tosei ). Since 1947 the mayors of shi as well as those of other municipalities and the governors of prefectures have been elected directly by the people. The city councils are now called shigikai ( 市 議会 , "city parliaments"), although the parliaments of some large cities continue to use their original name shikai . For large cities, three special forms of shi have since been added, with some additional administrative powers otherwise due to the prefectures: Instead of the tokubetsu-shi ("special cities") originally provided for in the law in 1947 , the seirei shitei toshi were established in 1956 , followed by chūkaku-shi (" Core cities "), 1999 tokurei-shi (" exceptional cities "). The latter were legally abolished in 2014/15 and are to be completely replaced by the "core cities" system in a few years' time, until then the previous tokurei-shi are formally shikōji tokurei-shi (施行 時 特例 市, ~ "exceptional cities at the time of implementation “) And keep the old rights.

Until the early 20th century, only a few were added to the original 40 shi from 1889/90, and the number rose rapidly, especially from the 1920s. In the 1950s (Shōwa no daigappei) the number of shi almost doubled and then increased steadily until it exceeded the number of cities belonging to the district for the first time in the 21st century. The total number of communities fell from over 15,000 in 1889 to below 1,800 today.