Tokushima ( Japanese 徳 島 市 , -shi ) is a city and the administrative seat of the Tokushima prefecture of the same name on the Shikoku island of Japan .

Tokushima is located south of the Yoshinogawa estuary on the Pacific Ocean . To the southwest of the center is Mount Bizan , whose view is considered one of the “one hundred most beautiful views in Japan ”. Due to the proximity to Honshū , the main Japanese island, there is not only an airport but also a ferry port . 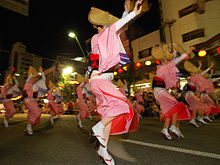 The four-day Tokushima Awa Odori dance parade from August 12th to 15th is known throughout the country and is accompanied by traditional music .

Tokushima is mainly industrial, here besides Japanese rice wine ( sake ) also textiles made of cotton , machines, as well as bamboo and wood products are made.

Tokushima is the home of the Tokushima Vortis football club .