The title of this article is ambiguous. Further meanings are listed under Fukuoka (disambiguation) .

Fukuoka ( Japanese 福岡 市 , Fukuoka ? / I - shi , "[independent] city of Fukuoka") is the largest city on Kyushu , the southernmost of the Japanese main islands, and the eighth largest city in Japan and the administrative seat of the prefecture of the same name, Fukuoka .

Fukuoka is located on Hakata Bay in the north of the third largest main island in the Japanese archipelago at the 33rd latitude north and 130th longitude east and thus roughly the same latitude as Shanghai , Casablanca or Los Angeles . The city extends with 343.4 square kilometers in a semi-oval shape over the so-called Fukuoka plain. With around 1.59 million people, it is slightly larger than Munich .

On April 1, 1972, Fukuoka was declared a "government-designated city" ( Seirei shitei toshi , 政令 指定 都市 ). At the same time there was a division into five city districts ( ku , 区 ). On May 10, 1982, two other districts were spun off from the Nishi district: Jōnan and Sawara. Another three districts have names of cardinal points : Nishi ( 西 , west), Minami ( 南 , south) and Higashi ( 東 , east). The municipality Chūō ( 中央 , "Middle") is regarded as the center, it houses the city administration.

Fukuoka is currently divided into the following boroughs: 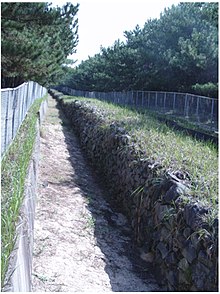 Wall remnants at Imazu in the west of Hakata Bay

As a number of archaeological finds show, Nordkyushu was inhabited since the Paleolithic. Due to its geographical location, the region has functioned as a hub for traffic with the Asian mainland since ancient times. In the 4th century BC Rice was first grown here on Japanese soil . A Chinese gold seal found in 1784 with the inscription "King of the land of Na of Wa of Han " indicates the existence of a small state of Na . A tribute embassy from this state from the year 57 AD is also mentioned in the book of the Later Han ( Hou Han Shu ), but there are still many interpretations regarding the correlation with archaeological finds etc. There is evidence of a hall ( Tsukushi no murotsumi ) for the 7th century , which indicates an increase in traffic with the mainland. In the 9th century, an official guest hall ( Kōrōkan ) was used to receive foreign delegations, to pass embassies to China and to manage and control foreign trade. The city was then called Hakata ( 博 多 ) and was mostly inhabited by traders and fishermen. Since the end of the 11th century, Chinese traders have also settled, which is still recognizable today in the place name Tōjin-machi (Chinese quarter). In 1161, an artificial harbor was created here for the first time in Japanese history through landfilling. The first Zen temple in Japan, the Shōfuku-ji , was built in Hakata in 1195 and is still used as a meditation center today.

In the second half of the 13th century, the region became the scene of two invasion attempts initiated under Kublai Khan by Mongolian troops . After the first exploratory battles in 1274, a 20 kilometer long stone wall was built, the remains of which can be seen in many parts of the bay. In 1281 the Mongols reappeared with a huge fleet. The typhoon that decimated this fleet and saved the country went down in Japanese history as the kamikaze (god wind). At the end of the 16th century, the region experienced a further boom after the general Toyotomi Hideyoshi (1537–1598) had brought the island of Kyūshū under his control.

With the establishment of the Tokugawa dynasty under the Shogun Tokugawa Ieyasu (1543-1616), the situation on Kyushu was reorganized. For support in the Battle of Sekigahara (1600) the House of Kuroda received a new fief. Since the Najima Castle (Najima-jō) in the east of the bay did not offer enough surrounding land for urban development, Kuroda Nagamasa (1568–1623), the first prince of this fief, had a castle built in the west of Hakata from 1601 to 1607 he called Fukuoka . The name also included the settlement around the castle, where the samurai involved in the administration lived.

For a long time, the two settlements of Fukuoka and Hakata existed separately. In the course of the reorganization of the administrative districts after the Meiji Restoration , the merchant town of Hakata (25,677 inhabitants) and the samurai town of Fukuoka (20,410 inhabitants) were united under the name Fukuoka in 1889. The main station ( Japan Railways ) of Fukuoka built in the area of ​​the former Hakata is called Hakata-Bahnhof ( 博 多 駅 Hakata-eki ), while the station of a regional private railway in the area of ​​the former Fukuoka is called Fukuoka-Bahnhof ( 福岡 駅 Fukuoka-eki ) .

During the First World War , the former governor of the German colony Tsingtau and his staff were interned as prisoners in Fukuoka. Because of its geographical location and economic importance, an imperial university, the Kyūshū University, was built in the east of the city in 1911 . Today there are a large number of private universities and colleges in the city's catchment area.

On July 16, 1927, the Roman Catholic diocese of Fukuoka was established in Fukuoka .

In World War II, large parts of the city fell firebombs victim. Fukuoka recovered rapidly in the post-war period. Although the neighboring city of Kitakyūshū with its steelworks and various processing plants also plays an important role in the industrial sector, Fukuoka is still the most important trading city on Kyūshū .

The northern part of Kyūshū is one of the seismically calmer regions of the Japanese archipelago, but here too there are occasional stronger earthquakes . On March 20, 2005, the "earthquake in the western coastal region of Fukuoka Prefecture" ( Fukuoka-ken seihō-oki-jishin ) with a magnitude of 7.0 destroyed numerous buildings. One person died and over 400 were injured.

Mayor of Fukuoka (Fukuoka-shichō) has been Sōichirō Takashima since 2010 . In November 2018 he was re-elected for a third term with LDP support against only one, CPY-supported challenger with a three-quarters majority.

The city parliament of Fukuoka (Fukuoka-shigikai) has 62 regular members: twelve from the East District, eleven from the South District, nine each from the Sawara and Hakata Districts, eight from the West District, seven from the Central District and six from Jōnan . It was re-elected in the unified elections in April 2019 , the LDP remained the strongest party with 21 seats.

In the 86-member prefectural parliament of Fukuoka (Fukuoka-kengikai) the capital is represented by a total of 22 members. Here, too, the districts function as electoral districts: the east and south districts as four-mandate constituencies, the Jōnan-ku elects two members, the other four districts are three-mandate constituencies. Of the prefectural parliamentarians from the city of Fukuoka, eight members of the (main) LDP parliamentary group after the (also unified) election in 2019, seven belong to the former DPJ parliamentary group, four belong to the Kōmeito , one of the CPJ , and two members constitute one-man Fractions (as of May 2019).

For the House of Representatives , the lower house of the national parliament , the city of Fukuoka lies in constituencies 1 to 3 of the prefecture, constituency 3 also includes the neighboring city of Itoshima to the west . All three constituencies have been represented by Liberal Democrats since 2012 , namely Takahiro Inoue ( 49.2% in the 2017 election ), Makoto Oniki (47.9% in 2017) and Atsushi Koga (59.0% in 2017).

According to a study from 2014, the Fukuoka metropolitan area has a gross domestic product of 193.3 billion US dollars (KKB). In the ranking of the economically strongest metropolitan regions worldwide, he was 58th and 4th in Japan behind Tokyo, Osaka-Kobe and Nagoya. The GDP per capita was $ 34,822.

Fukuoka is connected to the JR railway network with the San'yō-Shinkansen ( Hakata station ), in addition there are numerous other JR lines in local and long-distance traffic. The only private railway in Fukuoka is Nishi-Nippon Tetsudō (West Japan Railway, Nishitetsu for short ), which operates two lines. The Kyushu Highway connects Fukuoka with other regions in Japan. There is a toll city motorway within the city. The Fukuoka airport is very close to the city center, only two subway stops from Hakata Train Station. The port offers u. a. a connection with the hydrofoil and a large ferry (Camellia Liner) to Busan in South Korea and various ferry connections to smaller Japanese islands.

After the tram was shut down in the late 1970s, the city of Fukuoka pushed ahead with the construction of the Fukuoka subway . There are also numerous bus routes in the city, most of which are operated by the Nishi-Nippon Tetsudō company. 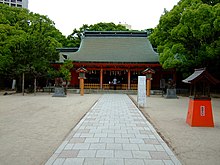 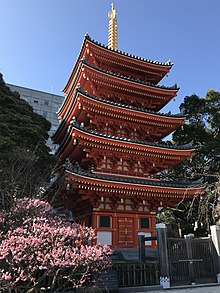 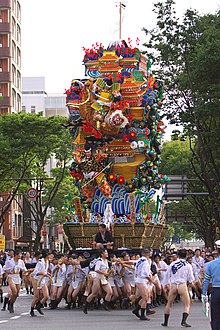 During the Hakata-dontaku festival (from the Dutch Zondag , Sunday) held on May 3rd and 4th , originally a New Year's custom , there is a procession of costumed groups as well as dance and song performances by the population on a number of stages set up in the city center.

The over 760 year old Hakata Gion-yamakasa festival of the Kushida Shrine ( Kushida-jinja ) takes place in the first half of July. In the districts of the former trading town of Hakata, "jewelry mountains" ( kazari-yama ) decorated with historical dolls are set up. Seven lower, almost one tonne heavy “carrying mountains” are moved through the respective district on certain dates. The high point and end of the festival begins at 4:49 am on July 15, when hundreds of men compete with the "carrying mountain" of their neighborhood over a distance of around 5 kilometers for the shortest possible time.

Tamaseseri (lit. "ball competition") is a custom performed on January 3rd in the Hakozaki shrine. Men wrapped in loincloths fight over a wooden ball. According to tradition, touching this sphere protects against disease and other evils. The most important festival of this shrine is a harvest festival called Hōjōya in autumn ( 12-18 September).

The annual festival of the Sumiyoshi Shrine is celebrated with sumo wrestling , among other things .

Fukuoka is one of the most important cities for secondary schools and universities in Kyushu.

One of the oldest and most renowned universities in Japan is the University of Kyūshū , which emerged in 1911 from a medical college founded in 1903 as an offshoot of the Imperial University of Kyoto and, as one of the seven imperial universities, played an important role in the modernization of the country. In 1916, American Baptists founded a middle school that over the decades developed into Seinan Gakuin University . Fukuoka University, founded in 1934, is the largest private university in Western Japan.