The title of this article is ambiguous. Further meanings are listed under Takamatsu (disambiguation) .

Takamatsu ( Japanese 高 松 市 , - shi , literally: high jaw ) is a city and the administrative seat of the Japanese prefecture of Kagawa . It is located on the Japanese Seto Inland Sea in the north of the island of Shikoku . With the port as the center, it stretches inland through the plain near the coast and is bordered on the edges by mountains and hills.

Takamatsu's climate is quite mild, snow is rare, and summer is hot and humid. The cherry blossom is usually at the beginning of April or the end of March, the rainy season in June.

Takamatsu is an old castle town , which was mainly shaped by the Matsudaira princes from the Mito family, who ruled here from 1648 to 1868. The city was officially founded on February 15, 1890 . However, it had been a political and economic center of the region since the Edo period , as the Matsudaira clan made Takamatsu the capital of their fiefdom .

Until the Seto Bridge was completed in 1988, Takamatsu was an important ferry port for the connection to the main island of Honshu. The station is still a terminus today, where the train has to turn around to continue to Tokushima. Trains run regularly from the Okayama Shinkansen Station via the Seto-Ohashi to Takamatsu. The Takamatsu Airport is located about fifteen minutes away from the city.

Well-known products from Takamatsu and the surrounding area are bonsai , udon , which is called Sanuki-Udon here, and lacquerware made using special techniques.

Takamatsu is home to the main campus of Kagawa University , which was created in 2003 from the merger of several existing universities.

The Takamatsu High Court is one of eight Japanese High Court and is located in Takamatsu.

In 1904 the Roman Catholic Apostolic Prefecture of Shikoku was established, which was elevated to the Takamatsu diocese in 1963 and has its seat in the city. 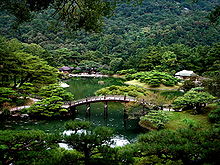 Takamatsu is famous for the Ritsurin-kōen landscape garden . Takamatsu Castle , of which remains have been preserved , used to stand at the port . The castle is now part of a park (Tamamo-kōen).

On the outskirts of the city in the east lies the Yashima peninsula with a temple ( Yashima-dera ), which is part of the famous 88-temple pilgrimage route to Shikoku . At the foot of the Yashima lava plateau is Shikoku-Mura, an open-air museum that brings together various buildings from all over Shikoku, from a suspension bridge to a simple fisherman's hut to a soy sauce brewery. This place is also famous as the site of the Battle of Yashima , a historic battle between the warring families Genji and Heike .

In the west of the city there is a similar mountain that extends into the sea: Goshikidai. There are also two temples on the Shiramine-ji and Negoro-ji pilgrimage routes .