This article covers the drawing device or mathematical instrument; for other meanings, see circles (disambiguation) .

Creating a circle with a compass 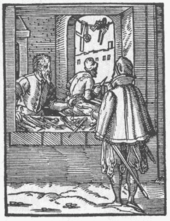 The circle ( old high German circil , from Latin circulus "circular path") is a drawing device for drawing circles or (more generally) for transferring distances. It is also a mathematical tool used in Euclidean plane geometry that draws a circle around a given point. A special form of compasses are elliptical compasses , which allow you to draw ellipses .

In ancient times, the compass was the only tool used to construct geometric objects alongside the ruler .

Also in mathematics lessons (geometry, construction), compasses and rulers are the only aids for performing geometric drawing operations ( parallel shifting of straight lines , setting up the perpendiculars on a straight line, the perpendiculars on a line , construction of triangles, trapezoids, parallelograms, rectangles, regular Hexagons, etc.).

Today, in addition to the compass and ruler , the set square and dynamic geometry software are used in school lessons .

The corresponding operations are also required in CAD and are sometimes carried out automatically.

Description of the circle

The sign device circle consists of two long same, usually metal rods which are each articulated at one end. One of the rods has a point ( needle ) at its other end , which is used to fix the compass on the surface. The center point of the circle is defined with the fixing, the radius with the distance of the second leg to the first .

At the end of the second, movable rod there is usually a device with which the circle or segment of a circle is drawn on the surface. Different devices are used for drawing, depending on the surface. A pencil lead (in school) or a device for ink (technical drawings) on parchment is used on paper. For representations of circles on other materials, such as leather , is chalk used. On metal surfaces is a scriber is used. Chalk compasses for blackboards (especially made of frosted glass) usually have a center leg that sits with a ball joint on the tip of a flat tripod. The legs have rubber feet or suction cups , a central white cone of sight points to the center of the board.

The angular distance between the legs determines the radius of the circle and is most easily fixed by (usually adjustable) friction of the leg linkage (s). Gear drives or balancing levers place the knurled pivot on the compass head vertically. Quick adjustment compasses have a strong spring on the head that presses the roller bearing, holds the handle symmetrically and gently presses the legs together. A rod with opposing threads and a central drive knurled wheel, which can be operated with one hand, spreads the legs in an adjustable manner. Nuts or threads with very large pitches that open at the touch of a finger and can then be moved (these in tightly sliding plastic nuts) enable even faster radius adjustments. Tailors' compasses made of wood and simple compasses for metal construction or carpenters often have a sheet metal arch (possibly slotted) that fixes the set leg angle together with a clamping screw.

Special compasses contain a millimeter graduation or a vernier on the pierced, fixed leg . The exact distance between the tips of the legs is read from the movable leg.

Circle variant with two points, one for each leg. It does not draw, but serves to tap lengths; With multiple grooving and further compassing, it is also used to determine lengths along curves or to create grooves at even intervals along curves or lines. In seafaring, for example, dividers are used to navigate using a map (cartography) , picking up routes and distances on maps or the geometric construction of link chains or wave phenomena. Dividers are also used by stonemasons to carve radial lines into a natural stone that they are working on.

A so-called field compass is a larger compass that can be operated by a standing person and is used to measure distances in the wild, on agricultural fields or in archeology . It can be set to a fixed size (usually 1 meter ). It does not achieve the accuracy of a tape measure, but it is more accurate than estimating and is sufficient for many purposes. 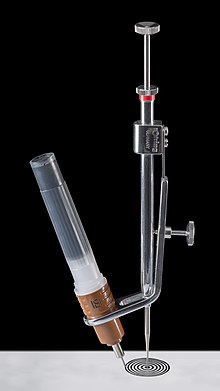 Falling zero circles are used to draw extremely small circles down to a diameter of about one millimeter . The tip of the axis is attached, the leg is dropped and rotated for drawing.

To draw large circles (up to a radius of 60 cm), a so-called compass is used, in which the two points (center of the circle and radius) can be moved in parallel on a metal rod.

A simple compass can be constructed from a nail or needle to determine the center point, a thread or cord to determine the radius, and a pen to draw. The ends of the thread are wrapped around a pin and nail, the appropriate radius must be determined by trying it out by means of winding (see also gardener's construction ). A string loop or thin cardboard pierced in two places can also be used.

Symbolism of the circle

In the Middle Ages, the circle became a symbol of geometry, cosmic order and planning work, especially in architecture as well as earth, land and city surveying. In the fine arts, book illuminations show the judge of the world as a geometer who measures the globe. The circle is still today a symbol of Freemasonry with the angle measure and the holy book , which was borrowed from the building brotherhoods of the cathedral building huts , who used this combination as a symbol. A circle is one of the attributes of temperantia , the personification of moderation and prudence, and personified melancholy such as B. in Albrecht Dürer's copperplate engraving Melencolia I (1514).

In the 20th century, the circle, along with the hammer and ears of wheat, was part of the emblem of the workers 'and farmers' state of the GDR . In it he symbolized the intellectuals (referred to as the "stratum of intelligence" in the parlance of the GDR), while the hammer and corn wreath represented the workers and peasants. A separate symbolism includes the coat of arms of Langenstein (Upper Austria) . The circle is also in the art direction socialist realism .

History: Specialization and generalization in the development of the circles