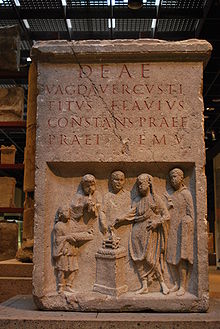 Weihaltar with a dedicatory inscription by T. Flavius ​​Constans . The altar is exhibited in the Roman-Germanic Museum in Cologne. Inventory number: 670.

A dedicatory inscription ( Latin tituli sacri ) was used in antiquity to document a votive offering to a deity in the form of an inscription . Dedicatory inscriptions could be obtained from public figures, the military or private individuals. They could be attached directly to the consecrated object or on an additional table ( tabula ). Inscriptions on fair bears have a special position . These have often been preserved and provide information about people and the worship of deities.

Consecrations usually included the name of the dedicant , the name of the deity being sacrificed, and a verb describing the dedication. These basic information can be supplemented by references to the occasion of the consecration. In Roman culture in particular , dedicatory inscriptions were formalized. Often, the initial letters or simple abbreviations are sufficient to reproduce the desired formula.

Common Latin formulas were for example: