Carotenes (plural for carotene , from Latin carota : " carrot ") are red-yellow natural pigments belonging to the terpenes with the empirical formula C 40 H 56 , which occur in many plants, especially in the colored fruits , roots and leaves . They are among the secondary plant substances . Chemically, these are tetraterpenes, in which one or two ionone rings are connected by a carbon chain with nine double bonds . They are clearly distinguished from the xanthophylls , which contain oxygen as well as carbon and hydrogen.

The carotenes are non-polar and therefore fat-soluble, which is why they can only be used in the human organism together with at least a small amount of fat. Carotenes come in many variants - over 600 are known to date. What they all have in common is a similar basic structure with different end groups.

The best known carotene is β-carotene . The name of the entire group of carotenes is derived from him. It is the main precursor of vitamin A in foods and is therefore also called pro-vitamin A called. In addition to β-carotene, α- and γ-carotene and β-cryptoxanthin can also be converted into vitamin A. However, the individual forms, such as β-carotene, also have effects independent of vitamin A.

In plants, carotenes play a role in photosynthesis and protect against the harmful effects of UV rays. Formed in the roots of plants, they protect against infections there.

Humans ingest large amounts of α- and β-carotene, α- and β-cryptoxanthine and lycopene with their food . The functions and effects of carotenes in the human body are becoming more and more known, but they are also easily disputed. For example, recent studies cast doubts about the cancer-inhibiting effect. A general cell-protecting effect as antioxidants can certainly be ascribed to them. 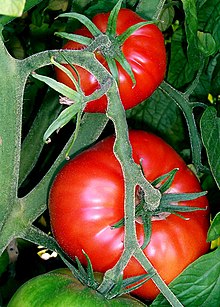 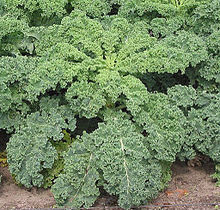 α-Carotene (alpha-carotene) is the color of the carrot with β-carotene and the red color of the tomato with lycopene . The yellow to red coloring agents in spinach , lettuce , oranges , beans , broccoli and paprika are also carotenes.

β-carotene (beta-carotene, INN : beta-carotene ) is the most important precursor of retinol (vitamin A) and is therefore also referred to as provitamin A.

The best sources of beta-carotene are kale , deep yellow to orange fruits and vegetables, but also dark green vegetables. At 8.68 mg β-carotene / 100 g, kale has the highest beta-carotene content of all foods. Examples:

For reliable qualitative and quantitative determination of the carotenes in human blood / plasma samples, the coupling of HPLC with mass spectrometry is suitable after appropriate sample preparation . The analytical technique is also suitable for determining the carotenes in plant material after specific sample preparation. The method can also be used to analyze oils.

Use as a food coloring

Beta-carotene extracted from plants or synthetically produced is used as a food coloring ( E  160a , see food additive ) and as an addition to vitamin preparations. Beta-carotene is added to many foods such as butter, margarines, confectionery, dairy products and lemonades, sometimes in very large quantities, in order to give the consumer the image of the goods (color) that he expects. Otherwise, margarines, for example, would be more or less white to light gray.

Absorption in the human intestine

The absorption of β-carotene is worse than that of vitamin A. About six times as much β-carotene has to be absorbed in order to provide the body with the same amount of vitamin A. The two fabrics can be freely combined. The German Nutrition Society (DGE) recommends a daily intake of 0.8 to 1.1 mg vitamin A for healthy adults.

Humans transport a large part of ingested carotenoids in unchanged form, while the rat converts carotenoids almost completely. Carotenoids are found in various human organs. The highest concentrations can be found in the liver , adrenal gland , testicles and corpus luteum . In contrast, the kidneys , lungs , muscles , heart , brain or skin have lower carotenoid levels.

An excess of carotenoids as a result of prolonged, excessive intake is visually noticeable in humans as yellowing of the skin ("carotinoderma", "carrot terus ", carotenemia ). The area of ​​the nasolabial folds , the palmar side of the hands and the soles of the feet are initially affected . The yellowing goes back when the oversupply is stopped.

Teratogenic effects of β-carotene are not known. Even high supplemented daily doses (20-30 mg) or a particularly carotene-rich diet over long periods of time are not associated with toxicity .

However, the multi-year supplementation of β-carotene is suspected in smokers and drinkers , the incidence risk for lung cancer and colon cancer to increase. For example, in an Australian study in the Journal of the National Cancer Institute on May 21, 2003, which wanted to investigate its effect as a sunscreen, double the number of adenomas in smokers and people who regularly consumed more than one alcoholic drink per day of the colon - the precursors of colon cancer. Instead, their incidence was reduced by 44% in non-smokers and non-drinkers. The American Cancer Society requires warning labels on goods containing β-carotene to warn smokers of a possible increased risk of lung cancer.

Regulations of the Federal Institute for Drugs, which have been in force since May 2006, only partially take into account the results and obvious conclusions from the above study. Since then, all drugs containing β-carotene have had to carry a warning that they pose an increased risk for smokers of developing lung cancer. Medicines containing more than 20 mg β-carotene may no longer be prescribed to smokers. No statement can be made from the studies as to whether the consumption of natural foods with a natural carotene content could pose a risk; however, the proportion of β-carotene in natural foods and juices is often noticeably lower than in artificially fortified foods.

As part of the so-called CARET study in the 1990s, the effect of supplementing 30 mg β-carotene daily in combination with 25,000 IU retinyl palmitate on the risk of incidence of various cancers and mortality was examined. 18314 people took part whose risk of lung cancer was increased because they either had a long smoking career or were exposed to asbestos dust . In addition to the further increase in the risk of lung cancer, the researchers found that the presumed consequence of supplementation was an increased mortality rate from cardiovascular disease .

Carotene was first discovered by Ferdinand Wackenroder , who isolated it from carrots. William Christopher Zeise realized that it was a hydrocarbon . Paul Karrer , who received the Nobel Prize for Chemistry in 1937 for his research on carotenoids , flavins and vitamins , had established the correct constitutional formula for beta-carotene in 1930 . To elucidate the structure, he used degradation reactions with ozone, potassium permanganate or chromic acid. The exact arrangement of the atoms of β-carotene was determined with the help of X-ray structure analysis and announced in 1964.