The title of this article is ambiguous. For the German entrepreneur, see Paul Spinat .

The real spinach ( Spinacia oleracea ), also called vegetable spinach , garden spinach or spinach for short , is a species of the spinach genus ( Spinacia ) within the foxtail family (Amaranthaceae, which contains the earlier Chenopodiaceae). This form of culture originated in Southwest Asia and is mainly used as a leaf vegetable . 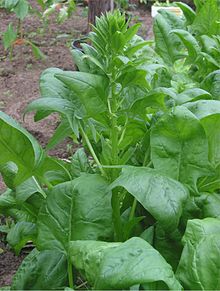 Habit and alternate, stalked leaves of a female spinach plant

Spinach is an annual herbaceous plant . The reddish, rarely white root is conical. The surface of the plant parts is usually bare. The upright, yellowish to pale green stem is not or only weakly branched at a height of 50 to 100 centimeters.

The long-stalked foliage leaves are initially rosetted, later arranged alternately on the stem, in female plants up to the stem tip and in male plants mainly basal. Their flat, slightly fleshy and light green leaf blade, arched between the leaf veins, is ovate to triangular-spear-shaped with a length of up to 12 centimeters, with entire margins or with a pair of lanceolate side lobes. The upper leaves are smaller, with shorter stalk to sessile and usually with entire margins.

Spinach is one of the long-day plants and quickly turns to flower formation from June to September with weak rosette formation. Spinach is dioecious, separate sexes ( dioecious ), only in exceptional cases monoecious ( monoecious ), some hermaphroditic flowers are rare. The flowers are usually four or rarely five-fold. Male flowers are in clusters of partial inflorescences in interrupted terminal, pseudo-annual total inflorescences . The male flowers have an inflorescence consisting of four (rarely five) green, full-margined tepals and four or rarely five stamens protruding from the inflorescence with flattened stamens and anthers about 1 millimeter long. The female flowers are in axillary, clustered inflorescences with about ten flowers. The female flowers are surrounded by two to four interconnected and perennial bracts , a flower cover is missing. Some authors interpret the prophylls as a flower envelope. The anatomy of the cover sheets is more complex than that of the reports ( Atriplex ). The upper ovary bears four or five long, thread-like scars.

At the time of fruiting, the enlarged, rounded, egg-shaped pre-leaves grow together and harden and enclose the flattened, approximately 2 to 3 millimeters large fruit. At the edge they are either smooth or they form horn-like appendages up to 6 millimeters long. These appendages can get stuck in the fur of animals and thus contribute to the spread of the fruit ( epizoochory ). Adjacent flowers never grow together. The membranous, brown fruit wall adheres tightly to the upright seed. The ring-shaped embryo surrounds the abundant, floury nutrient tissue.

Spinach is a C 3 plant with normal leaf anatomy .

Spinacia oleracea is used as food by the caterpillars of numerous butterfly species . In the HOSTS database is done with 55 items, such as fall webworm ( Hyphantria cunea ), the tensioner scopula fibulata , the Bluebird Zizeeria Knysna , numerous cutworm , including Agrotis and Spodoptera species, many spilomelinae as Herpetogramma bipunctalis and Spoladea recurvalis and the diamondback moth ( Plutella xylostella ).

The larvae of the leaf miner Amauromyza flavifrons feed on the leaves of spinach . There is often a strong infestation by the black bean louse ( Aphis fabae ). The report bug Piesma maculatum also sucks the sap .

Leaf spots to be spinach by the mold - anamorphs Cladosporium variabile well as by the ascomycete -Anamorphe Colletotrichum Dematium f. spinaceae causes. A downy mildew Peronospora farinosa f.sp. spinaciae was found in pale yellow spots on the living leaves.

Spinacia oleracea probably originated in southwest Asia and has been naturalized in the Mediterranean region since ancient times. As a cultivated vegetable plant it is widespread in Europe , Asia and North America , sometimes it is also found wild. It grows in the temperate and subtropical regions up to an altitude of 1550 meters (in Afghanistan).

Spinacia oleracea belongs to the tribe Anserineae in the subfamily Chenopodioideae within the foxtail family (Amaranthaceae). This family includes the goosefoot family (Chenopodiaceae).

The first publication of Spinacia oleracea was made in 1753 by Carl Linnaeus in Species Plantarum , 2, S. 1027th

There are around 50 cultivars of spinach . Varieties with horned fruits are considered to be more original and cold-loving, varieties with round fruits, which presumably originated in several places independently of one another, are considered more developed and more tolerant of high temperatures. Round and horned fruits have also been found on the same plant in Turkey.

A wild form of Spinacia oleracea is not known. Presumably, this cultivar originated in Southwest Asia from the two wild spinach species Spinacia tetrandra Steven ex M.Bieb. and Spinacia turkestanica .

A forerunner of the spinach known to us was probably cultivated in Persia as "ispanāğ" and was brought to Spain by the Arabs as "isbanāh" . He was first reported there in the 9th century. In Spain the name changed to "espinaca". Albertus Magnus mentioned it for the first time in Central Europe in the 13th century : "It surpasses the report, has borage-like leaves, plantain-like flowers and prickly fruits." In the Mainz Hortus Sanitatis of 1485, it is described as a medicinal plant. The botanist Leonhart Fuchs called him “Spinachia” in his herbal book in 1543 and wrote: “Spinach or spinet would also be worthy of Beynetsch ... in Arabic Hispanach ... as Hispanach herb, perhaps because it was first brought from Hispania to another nation ... She helped Digestive disorders and is also used externally. ”At that time, spinach was already widespread and, as a vegetable, was increasingly displacing the garden melde popular in the Middle Ages .

Today, real spinach is grown as a vegetable worldwide, with the exception of the tropics, in Europe mainly in Italy, France and Germany. 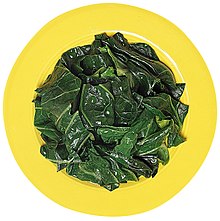 Real spinach ( Spinacia oleracea ) is a valued food crop . Young leaves can be used raw as a salad ingredient. More often the leaves are eaten cooked than vegetables .

In German cuisine, pureed spinach is traditionally served with eggs (as a fried egg or lost egg ) and potatoes , in Swabia with spaetzle. In order to soften the slightly metallic-bitter, somewhat astringent taste and to reduce the nitrate content (by 40–70%), spinach can be blanched before further preparation . When blanching, a large part of the water-soluble nitrate remains in the cooking water, but some of the other ingredients are also lost. Frozen spinach is usually blanched shortly after harvest.

The seeds are also edible raw or cooked. Sprouted seeds can be added to salads as sprouts.

For longer storage, brief blanching , quenching in ice water and subsequent freezing is recommended. Then it can be stored for up to 10 months.

Spinach should not be stored too long (about a whole week) at room temperature. With raw and especially cooked spinach (as with many other vegetables) the nitrate contained, which is itself non-toxic, is bacterially converted into nitrite in the long term . Nitrite acutely affects the oxygen transport in the body. Relevant amounts can only be imagined in children due to the lower body weight. However, warming up in itself is harmless. If the corresponding amino acids are present and under the influence of heat, nitrite can produce carcinogenic nitrosamines . It is not advisable to consume fish products at the same time, as these contain a greater amount of the amino acids required for nitrosamine formation . Nevertheless, the resulting quantities cannot be compared with other relevant sources such as grilled food, cured products or bread with a very dark crust.

Spinach as a medicinal plant in Tacuinum sanitatis

Spinach is or was also used as a medicinal plant. The plant is a remedy for flatulence ( carminative ), the seeds are used as a laxative (laxative). In experiments, hypoglycemic properties have been demonstrated.

Spinach was also used to treat kidney stones . The leaves were used as a fever-lowering agent ( antipyretic ), for inflammation of the lungs and intestines. The seeds have been used in the treatment of breathing problems , liver inflammation and jaundice .

Spinach is used to color other foods such as B. used pasta. To do this, it is first processed into spinach mat . Chlorophyll is extracted from the leaves , which is used as a green food coloring or added to mouthwashes and odor-binding products. 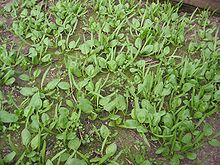 Root spinach before processing in the kitchen 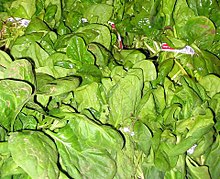 Spinach plants are sown and harvested in such a way that they only receive short-day conditions, which promotes the formation of the leaf rosettes and reduces flower formation. For the harvest in late autumn and winter, sowing takes place in August, for the spring harvest in September or from mid-March if the ground is open. The plants should be covered during cold frosts. They have a medium nutritional requirement and should not be fertilized with fresh manure. Excessive nitrogen fertilization leads to strong nitrate accumulation in the plants.

In 2017 the world harvest was 27.88 million tons. The country with the largest spinach production in the world was China , which produced 91.8% of the world's crop. Asia was responsible for about 95.7% of the world's harvest.

The ten largest spinach producers in 2017 were:

Depending on the date of sowing, a distinction is made between the tender spring and summer spinach (harvest from March to May), which can also be eaten as a salad, and the stronger, long-stemmed autumn and winter spinach (harvest from September to November), which is always cooked. Root spinach (fresh with roots), leaf spinach and creamed spinach are available in stores. A large part of the spinach harvest is marketed frozen by the food industry .

Spinach has a high content of minerals , vitamins ( β-carotene , also called pro-vitamin A, vitamins of the B group, vitamin C ) and protein . Although it has a high iron content among vegetables (3.5 milligrams in 100 grams of fresh spinach), which is still occasionally claimed to this day, spinach does not have an unusually high iron content. Spinach also contains oxalic acid and accumulates an above-average amount of nitrates from the soil, especially if it is not grown outdoors. Spinach contains - as all photosynthetic active green plants - the protein ribulose-1,5-bisphosphate carboxylase / -oxygenase ( RuBisCO ), which is partially in the digestion in the opioid peptide rubiscolin is degraded.

The ingredients in detail (all information relates to 100 g of fresh spinach):

The misconception that spinach has an abnormally high iron content is due to failure to consider the difference between dried and fresh spinach. The legend probably has its origin in the work of the Swiss scientist Gustav von Bunge . In 1890 von Bunge correctly put the iron content of 100 grams of dried spinach at 35 milligrams. The result was then transferred to fresh spinach, although due to the high water content it only contains around one tenth of iron per 100 grams. With the undiscovered misunderstanding, the fairy tale of iron-rich spinach was spread for decades, promoted by numerous advisors and figures such as the spinach-eating sailor Popeye . The uncritically adopted thesis was widespread in the medical profession for decades.

According to another representation, one would have made a decimal point in a nutritional table about a hundred years ago. This means that spinach has been given a ten times higher amount of iron than it actually has. This comma error has been passed on since then. The British cancer specialist TJ Hamblin, among others, made this claim in an article in the British Medical Journal in 1982, but could not provide any evidence for it. In 2010, TJ Hamblin himself wrote that the explanation with the misplaced comma is most likely wrong.

According to a study by the Free University of Berlin from 2019, a contained in spinach can ecdysteroid that ecdysterone , an effect unfold, leading to increase in strength and performance. Athletes who were given this substance in concentrated form during ten weeks of strength training - albeit in a much more concentrated form than in the spinach plant - showed a significantly higher gain in strength than the control group. The international World Anti-Doping Agency (WADA) was therefore recommended to put the substance on the doping list .