The foxtail plants (Amaranthaceae) are a family in the order of the carnation-like (Caryophyllales) within the flowering plants (Magnoliopsida). The goosefoot family (Chenopodiaceae), which is often managed separately, is also incorporated here. The foxtail grasses are not related to this group . 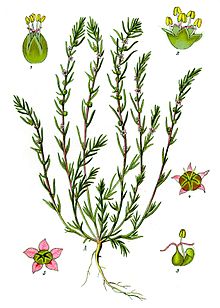 Most types are annual or perennial herbaceous plants or subshrubs ; there are also some shrubs ; few species are lianas or trees . Many species are succulent . In many species are attached to the stems , the nodes ( Nodien ) thickened. The wood of the perennial parts of the stem axis shows an "abnormal" growth in thickness typical of the family , which is only missing in the Polycnemoideae .

The leaves are mostly alternate , occasionally also opposite . There are no stipules. The shape of the leaves is extremely variable, the leaf margins are entire or serrated, their cross-section is flat to stalk-round, in some species the leaves are also reduced to tiny scales. 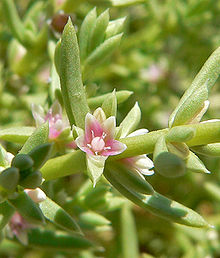 The bracts and bracts are either herbaceous or dry-skinned. The inflorescence is more or less herbaceous or dry-skinned and consists of (rarely one to) usually five (rarely up to eight) tepals . The stamens, which are mostly in the same number, are either in front of the tepals or in between. They arise at the base of the flower from a disc, which in some species has appendages (pseudostaminodes). The anthers have two or four pollen sacs . In the Caroxyloneae there are bubble-shaped anthers appendages . The pollen grains are round with numerous openings ( pantoporat ), whereby the number of pores can range from a few to 250 (in Froelichia ). The best one (rarely to six) to three pistils have become a top permanent ovary grown. In the ovary there is one (rarely two) basal ovule .

Either the seeds serve as the dispersal unit ( diaspores ), but often the cladding leaves are also still present in the ripe fruit and undergo transformations that serve to spread. Occasionally the bracts and propsheets are also included in the diaspore. Capsule fruits or berries are less common . The seed is oriented horizontally or differently, often with a thickened and lignified seed coat. The embryo is green or white, spiral (then without nutrient tissue) or ring-shaped (rarely straight).

The occurrence of betalaines is widespread among the foxtail plants . The earlier Chenopodiaceae often contain isoflavonoids .

In phytochemical examinations, methylenedioxyflavonols , saponins , triterpenes , ecdysteroids and special carbohydrates were found in the roots .

With around 800 C 4 species , the foxtail family are the largest group with this photosynthetic pathway within the eudicotyledons (around 1600 C 4 species). Within the family there are different types of C 4 photosynthesis and about 17 different types of leaf anatomy. It is therefore assumed that this trait was acquired independently about 15 times in the evolution of this family, 2/3 of which in the former Chenopodiaceae. C 4 photosynthesis first occurred in the early Miocene , about 24 million years ago. In some groups, however, this photosynthetic pathway emerged much later, six (or less) million years ago.

The multiple development of C 4 photosynthesis in the Amaranthaceae is seen as an adaptation to increasing water scarcity and higher temperatures. Due to their greater efficiency in water consumption, these species had an advantage in dry habitats and were able to spread there.

Some species, such as spinach ( Spinacia oleracea ) or cultivated forms of the beet ( Beta vulgaris ) (e.g. beetroot , Swiss chard ), are used as vegetables . Other forms of Beta vulgaris are the fodder beet and the sugar beet . The seeds of several Amaranthus species and quinoa ( Chenopodium quinoa ), rarely also called quinoa , are used in a similar way to grain ( pseudo- grain ).

Soda is obtained from several types .

As ornamental plants , for example, are Amaranthus caudatus , celosia and Iresine used.

The Amaranthaceae family is distributed worldwide in the temperate zones as well as the subtropics and tropics . Many species are adapted to soils with a relatively high salinity or occur in dry steppe and semi-desert areas. 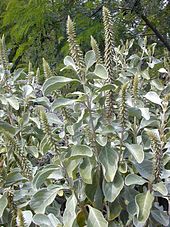 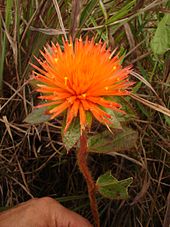 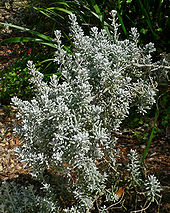 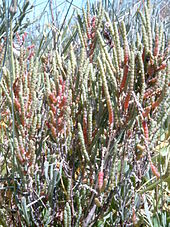 A group of genera that comprises more than half of the species has traditionally been separated as a separate family of goosefoot plants (Chenopodiaceae). Molecular biological studies have shown that the two traditionally differentiated families are closely related and have suggested that the goosefoot family are paraphyletic and only result in a monophyletic taxon when combined with the Amaranthaceae in the narrower sense . Recent publications continue to use the family name Chenopodiaceae.

The Amaranthaceae family was set up in 1789 by Antoine Laurent de Jussieu in Genera Plantarum , pp. 87-88. The Chenopodiaceae family was first published in 1799 by Étienne Pierre Ventenat in Tableau du Regne Vegetal , 2, p. 253. The oldest scientific name of the expanded taxon that is valid according to the priority rule is Amaranthaceae.

From the cladogram it becomes clear that the classification of the Chenopodiaceae depends crucially on the subfamily Polycnemoideae : If it is regarded as part of the family as before, the Amaranthaceae in the narrower sense must also belong, and the name of the extended family is Amaranthaceae according to the priority rule. However, if the Polycnemoideae were separated as their own family, then Chenopodiaceae and Amaranthaceae would be two monophyletic relatives that could be viewed as separate families.

The systematics of the Amaranthaceae family has been intensively researched for several years. Molecular biological studies have shown that the previous classification, which was based on morphological and anatomical features, did not reflect the family relationships. The sooner the Gänsefußgewächsen (Chenopodiaceae) attributed types are classified into eight subfamilies is presently (2011) (the processing has not been completed): the Polycnemoideae which are initially considered, as well as the betoideae , Camphorosmoideae , chenopodioideae , Corispermoideae , Salicornioideae , Salsoloideae and Suaedoideae . Within the Amaranthaceae s. st. (in the narrower sense) the subfamily Amaranthoideae and some genera within the Gomphrenoideae turned out to be polyphyletic , so that further taxonomic changes are to be expected here in the next few years .

The family Amaranthaceae sl is divided into ten subfamilies in the preliminary systematics and contains about 176 genera with about 2050 to 2500 species: