The title of this article is ambiguous. Further meanings are listed under hail (disambiguation) .

Hail is a form of precipitation that consists of lumps of ice and occurs predominantly in warm seasons and the mid-latitudes . To distinguish it, one speaks of hail or ice hail only when the diameter is more than 0.5 centimeters, including sleet . Aggregates of snowflakes with a diameter of less than one millimeter are called Griesel .

The word hail (old German hagal ) is probably related to the Greek word κάχληξ káchlēx "pebble", which is based on the Indo-European root * kaghlo-s "small stone".

The name Schloße for a hailstone , which is also commonly used, gives the color name schlohweiß ( dissimilated from schlossweiß ), which means "white as a hailstone" and describes a light, pale shade of white . 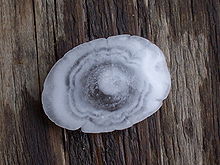 Clearly recognizable accumulation layers in the core of a large hailstone

Hailstones arise in the lower layers of thunderstorm clouds or within a thunderstorm cell due to supercooled water that freezes to ice on crystallization nuclei . These cores must be present in comparatively small numbers so that the amount of water available per core is sufficiently large to enable rapid growth. Since the clouds are very water-rich, the latent amounts of heat converted through phase changes result in a strong instability of the temperature stratification within the cloud. The resulting strong updrafts of 20 to 30 m / s are another important factor for the formation of hail, because the freezing processes result in a constant increase in the mass of the particles. Without an updraft, the particles would sink under the force of gravity , move away from the cloud and thus not be able to grow any further.

It shows that the updraft within a cloud is of different strength and that particles can circulate through it. First they are lifted by the updraft, then they fall back into deeper layers of the air, absorb more water, are pulled up again, and additional water freezes on. This process is repeated until a hailstone is too heavy to be carried by the updrafts. From the size of the hailstones, conclusions can be drawn about the wind strength inside the thundercloud, which in turn also serves to forecast hail diameters.

The gradual formation of the hailstones can be read off from the individual layers that make up a hailstones. The clear layers indicate a very water-rich environment with correspondingly rapid freezing, while the cloudy areas are due to lower water contents. The turbidity itself is caused by countless small air pockets. If the hailstone is ultimately too heavy and sinks out of the updraft range, it does not melt due to the size of the hailstone and a temperature of mostly below 0 ° C.

Worldwide, the middle latitudes (temperate zone) are most severely affected by hail events, in particular Central and Southern Europe, the USA, Mexico, Eastern China, Argentina, South Africa and Southeast Australia. However, areas close to the equator are also occasionally affected if the soil conditions are appropriate, including Kenya (especially the Kericho region ) or Ethiopia. Hail also occurs more frequently on the edges of the mountains, for example on the Andes in Peru, Ecuador and Colombia or on the Himalayas in northern India or in Nepal.

Size and speed of fall

The size of hailstones varies greatly: The Swiss Hail Register differentiates between eleven intensity classes, ranging from small hail of less than 0.5 cm to exceptionally large hail of over 10 cm in diameter. The weight of the grains varies according to the formula

with as the hail diameter between 0.1 g and more than 500 g. Damage to cars, glass panes and tents occurs from a diameter of about 2 cm, with hailstones of this size according to the formula

Reach falling speeds of around 70 km / h. Smaller hail, on the other hand, falls more slowly, while exceptionally large hail, conversely, can reach speeds of well over 150 km / h: At 12 centimeters in diameter, for example, it is already over 170 km / h with which such a hailstone hits, according to the formula

has a kinetic energy of almost 900 joules. As you can see, the energy of the hailstones increases with the fourth power of their diameter: a hailstones twice as thick already has sixteen times the energy, which explains the devastating effect of coarse-grained hailstorms.

The largest hailstone in US history to date with a diameter of 20 cm and a weight of 875 g was found on August 9, 2010 in the American state of South Dakota , according to the news channel CNN , and thus had an energy of over 6,900 joules on impact, about three times the muzzle energy a bullet. The largest hailstone ever registered in Germany, on the other hand, measured when it fell from the sky at around 186 km / h on August 6, 2013 over the district of Undingen in the municipality of Sonnenbühl , only 14.1 cm in diameter. 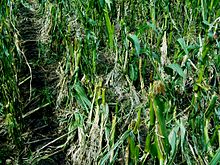 Hail damage in the corn field

Hail damage to a car

Hail showers can cause considerable damage to plants and animals, but also to buildings and cars. Most of the arable land is exposed to hail without protection. In addition, hailstorms cause severe damage to trees and thus reduce the forest cover. Due to the small extent of a hailstorm, only limited damage is usually recorded. The hailstorm with the highest damage amount took place in Munich in 1984. The damage amounted to over € 1.5 billion. 2013 led to hailstorms, especially the events in Baden-Württemberg and Lower Saxony on 27/28. July, damage totaling € 2.7 billion. 2013 was also a remarkable year in terms of hail damage to cars: 635,000 cars in Germany were damaged by hail showers - more than ever before. This resulted in an insured loss of 1.5 billion euros. Hail damage to the bodywork of vehicles can occur from a diameter of around 2 cm.

The possibly existential financial risk of crop failures due to hail can only be covered by special insurance ( hail insurance ). Hail insurance is a form of damage insurance in which the insured soil products, in particular all economically usable plants, are insured against damage caused by the effects of the hailstorm. Greenhouses can also be included. Homeowners insurance covers damage to houses caused by hail. Partial comprehensive insurance applies to vehicles in the event of hail damage.

Because of the sometimes considerable damage caused by hail, attempts were made at a very early stage to develop ways and means of avoiding hail.

Climate change appears to have an impact on the frequency with which hailstorms occur. As researchers at the University of Karlsruhe found out, the number of hailstorms has increased significantly in the last few decades. While the number of days with hail damage was five in 1986, in 2004 it had grown to 34.

Silver iodide generator of a hailfly .

A wide variety of methods have been used to avoid damage from hail since ancient times, from prayers , ritual processions, weather chimes and protective symbols to technical methods such as bombarding thunderclouds with firecrackers, cannons and rockets. From the middle of the 20th century, the introduction of silver iodide (AgI) into the clouds was discovered as a method. Silver iodide forms ice nuclei and is supposed to prevent the formation of larger hailstones through additional crystallization nuclei. The AgI is mainly deployed by rockets or specially equipped small aircraft, so-called hail pilots . The effectiveness of hail control with silver iodide has not yet been scientifically proven.

Another attempt is made with hail cannons. Here, sound waves are generated every few seconds by gas explosions and ejected through a funnel. This is intended to disrupt the formation of hail and convert the hail into wet snow. The method is considered ineffective by engineers and meteorologists.

In addition, hail protection nets made of polyethylene (PE) are used in agriculture , which are stretched over entire plants and let the hailstones fall down in the eaves area.