This article covers the concept of habit. For other meanings, see Customs (disambiguation) . 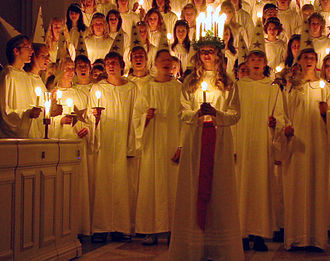 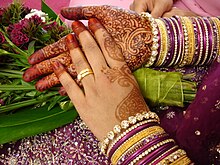 A typical custom in South Asia is painting the hands of a bride on the first wedding day with ornate henna patterns, (see also Mehndi )

The Apache tradition includes the spiritual "dance of the mountain spirits"

The Hongi greeting is a Maori custom

A custom (from Old High German  bruh , benefits', and due to the Middle High German fractures , need, use, use ') or custom (of Latin uti , use') is a within a community resulting, periodic, social action of people in solid, heavily ritualized forms. Customs are an expression of tradition . They serve to preserve and pass them on as well as the internal cohesion of the group ( group cohesion ).

In contrast to ritual , rite and cult , the custom is far less symbolically directed towards a “higher goal”, although many customs have developed from cultic acts in the course of cultural change .

An individual's habits are not called custom . From an ethnological point of view, a custom determines the course of ceremonies , whereas a custom is the moral order behind the custom. All customs - or a coherent group of customs - of a community as an overall cultural phenomenon are called a custom or a complex of customs .

Customs as a term

The term custom for the custom complex is out of date and is hardly used in folklore custom research. However, it is always mentioned for the entirety of the customs of a people or an ethnic group.

A custom manifests itself as an accompanying phenomenon of certain life experiences perceived as incisions. Human culture has developed a rich tradition. This is expressed in biological experience and developments, such as birth , sexuality , death or in the social sphere through anniversaries , festivals , celebrations and ultimately in the transcendent in forms such as cult and religious festivals.

The initiation and passage rites at birth, admission into the community, wedding and death are often connected with customs, as well as various festivals and times of the church year , such as Advent , Christmas , Epiphany , Lent and Easter , Thanksgiving , Leonhardi trip , Hubertus , Nicholas - and Barbaratag .

Customs serve to create meaning, identity and integration . They unite and have a community-building effect. During state visits, the national anthems are heard and the respective nation is honored in the form of the hoisted flag . Fire brigades , sports and music clubs, carnival groups, guilds and universities, children's groups, youth clubs or gangs form and preserve regional and national customs.

Custom as a regular pattern of action

A custom is an act that does not take place arbitrarily or spontaneously, but requires a certain regularity and recurrence, furthermore a group exercising custom, for which this act becomes meaningful, as well as a course of action marked by beginning and end, its formal and symbolic language of the carrier group must be known. Customs must be distinguished from rituals , which seeks to combine the social with the religious world, and from custom , which is a sober, functional, not necessarily social routine. The ritual is part of the custom complex. Customs also have an action-oriented effect. They provide a framework, a set of signs and symbols, instructions and roles and adapt them. Often times, customs provide an accurate formulation for a particular occasion that is expected by those involved.

In the course of development, customs can lose their meaning and become an empty end in themselves. In this they are related to the ritual, in which the decoupling of form and content can lead to hollowing out, meaning emptying of meaning. Customs and rituals are only experienced as meaningful by social actors when form and content go together.

The industrial revolution of the 19th and 20th centuries brought about the transition from a predominantly agricultural society to an urban-industrial, modern society. This lost the meaning of many of the collective habits and regional customs that were at home in the pre-industrial world. This is often referred to and criticized as a loss of tradition . Maintaining traditional customs second-hand and mostly without any actual reference to historical significance is described as folklorism . Conversely, folklorists find that new customs are constantly emerging. These customs often do not have the same binding force and lifespan as the customs of earlier times. The background to this is that the traditional chains that pass on customs are getting shorter. The custom wiki is dedicated to listing and recording customs from different areas .

A distinction is made, for example, between alpine customs and old Scandinavian customs . Swiss customs are described in more detail in the article on Swiss culture and in the list of living traditions in Switzerland . Regional peculiarities are expressed in folk dance or clothing . In summary, customs are presented in folklore .

In addition to the Christian customs that are widespread in German-speaking countries , the Minhag is found as a Jewish tradition. In the context of neo-pagan reconstructions of presumed pre-Christian customs, a Celtic neo-paganism developed in modern times .

Customs throughout the year

Another way of classifying customs is the sequence in the year. Such a classification is sometimes limited to a region. The course of the year with the change of seasons or work processes determines the monthly division.

Customs on the résumé

In this form, there are customs for birth, reaching adulthood ( confirmation , confirmation , youth consecration ), for the initiation of love, at engagement or wedding and the sepulchral culture .

Customs of the trades and classes

Extensive customs have developed within some professions; in addition to the craftsmen , it particularly affects the customs of miners . Ritualized processes can be found in the associations of riflemen and, related to this, in soldiers . Further customs can be found among the students , in hunting customs and in (partly regional) customs for graduation ceremonies .