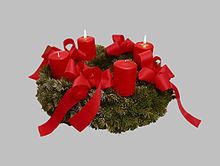 The Advent wreath was introduced in 1839 by the Evangelical Lutheran theologian , educator , co-founder of the Inner Mission and founder of the Evangelical Diakonie Johann Hinrich Wichern (1808–1881) in Evangelical Northern Germany, with which he wanted to shorten the time until Christmas for street children of the beginning industrial age. Almost a hundred years later it could also be found in Catholic areas. 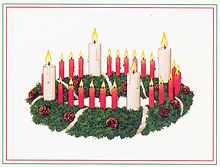 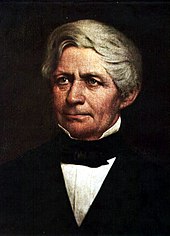 The original form of the Advent wreath, invented by Johann Hinrich Wichern in the Rauhen Haus in Hamburg , is called the Wichernkranz . It was a wagon wheel with initially 20 small red and four large white candles, which was first set up in 1839 by Johann Hinrich Wichern. A candle is lit every evening from the 1st of Advent to Christmas Eve . The big candles are for the Advent Sundays, the small ones for the working days. The number of small candles until Christmas Eve is different every year. They vary between 18 and 24 because the 1st Sunday of Advent begins on a different date each year.

Wichern hung the wreath in the prayer room of the orphanage. He should help the children understand the number of days until Christmas. It also taught the children to count.

This original Advent wreath is called the Wichernkranz by the Diakonie and Evangelical Church in Germany (EKD) to distinguish it from the simplified Advent wreath with four candles, which no longer offers the possibility of lighting a candle every day of Advent, but only from the 1st Sunday of Advent another candle on every further Sunday in Advent, without Christmas Eve being particularly emphasized. 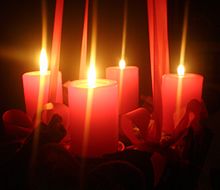 Advent wreath with four candles on the 4th Advent

The assumption that is sometimes made that the Advent wreath existed long before the time of Johann Hinrich Wichern is based on a poem in which the Advent wreath is described and which is often incorrectly attributed to Matthias Claudius (1740–1815). In fact, the poem comes from his great-grandson Hermann Claudius (1878–1980).

Solstice wreath and wreath of lights in National Socialism

According to the ideas of the National Socialist party designers, the traditional Advent wreath was to be replaced by the “Sonnwendkranz” or “Lichterkranz”, which were mostly decorated with sun wheel or Viking motifs. The candles on the wreath were supposed to symbolize the four seasons as “wishing lights”. To light the "wishful lights", so-called "light slogans" were presented, which were "suggested" in appropriate Christmas books or the pre-Christmas calendar .

The one above the fountain in Mariazeller Hauptplatz is referred to as the “world's largest hanging Advent wreath” . It has a diameter of 12 meters and weighs 6 tons. Based on the original Wichern Advent wreath, it is equipped with 24 lights, 4 for Sundays and 20 for working days.

Snowed in Advent wreath in Kaufbeuren

The eight-meter diameter Advent wreath in Kaufbeuren is advertised as the “largest real Advent wreath in the world” . It consists of real white fir branches and is equipped with almost 2 meter high wax candles. It stands at the city's Neptune Fountain from the 1st of Advent until Epiphany.

Advent wreath with a pink candle for the Sunday Gaudete in St. Richard in Otting

There are different interpretations of the symbolism of the Advent wreath. The original symbolism is the increase in light as an expression of the increasing expectation of the birth of Jesus Christ , who in the Christian faith is called "the light of the world".

In addition, various interpretations have emerged that relate to the circular shape, the symbolism of the wreath, the fir green in winter as well as the colors of the candles and the bows: This is how the Advent wreath is often interpreted in relation to the globe and the four cardinal points . The circle also symbolizes the eternity of life given with the resurrection , the green the color of hope and life, and the candles the coming light that illuminates the world on Christmas night .

The number of four candles goes back to the number of Sundays in Advent . Pope Gregory the Great had set it at four for the Western Church. The four Sundays symbolized the four thousand years that people had to wait for the Savior after the fall of man .

The Benedictional the Catholic Church contains a rite for the blessing of the Advent wreath. In the Catholic Church and Catholic areas it is sometimes customary to decorate the Advent wreath with three purple candles and one pink candle. The pink candle is lit on the third Sunday in Advent, Sunday Gaudete (Latin for rejoice! ). The color symbolism is based on the liturgical color of the vestments : The liturgical color of Advent is purple; on the third Sunday in Advent, pink (= violet, through which the festive color white shines) paraments can be used (see Laetare in Lent ). In the Catholic part of Ireland , where Advent wreaths are only used in churches, there is another white candle in addition to the three purple and one pink candle. This fifth candle stands in the middle of the Advent wreath and is lit on Christmas Eve . The individual candles are also associated with names that used to correspond to the liturgy of the respective Advent Sunday : Isaiaskerze, Johanneskerze, Josefskerze and Marienkerze.

In the Ore Mountains , the Advent wreaths are traditionally decorated exclusively with red candles. The color red here stands for love and the light with which Christ came to people. The wreaths made of spruce and fir branches, which are tied in the week after the Sunday of the Dead, are decorated with gold-plated pine cones and bells, glass mushrooms or, more recently, glass balls. In some areas of Saxony , the Advent wreath is hung with 24 nuts, four of which are silver for the Advent Sundays and one gold for Christmas.

Sometimes the Advent wreath is decorated with candles in the four colors purple, red, pink and white, which are lit in this order.

In the Ambrosian rite six candles are used instead of the four common in the Roman rite, whereby the Advent period also includes six weeks. In churches of the Ambrosian rite (ecclesiastical province of Milan and some parishes of the Diocese of Lugano ) the Advent wreath is always placed on or in the immediate vicinity of the altar during masses and the corresponding candles are ritually lit during the mass.

Protestant Norway also knows the tradition of choosing candles according to the liturgical color . According to the tradition of the Lutheran Norwegian Church, these are four purple candles. In Sweden the first candle is traditionally white, the other three purple. White stands for the color of paradise, as Kristin Solli Schøien describes in the 2003 book “I en kurv til min datter”.

There is a tradition that candles lying next to each other or the candles on the Advent wreath are always lit counterclockwise. The lighting of the opposite candle on the second Advent is considered wrong in this tradition.

The symbolism of lighting candles is also thematized by Advent songs such as We tell you to love Advent by Maria Ferschl and Heinrich Rohr and the widespread nursery rhyme Advent, Advent, a little light is burning .

Various festivals of lights or lights customs are similar in light symbolism greater or lesser degree the wreath described here: