from Wikipedia, the free encyclopedia
This is the spotted version , flagged on July 18, 2020 . There are 3 pending changes that have yet to be viewed. 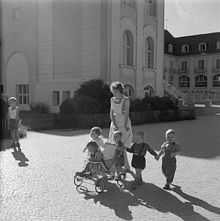 Educators are educational specialists who have completed training at a technical school , a technical academy or a vocational college . Kindergarten teacher, on the other hand, is a profession that is still partly in use in Germany, but outdated. By framework agreements of the Conference of Ministers of Education and Cultural Affairs from 1967, the previously separate training courses for kindergarten teachers , after-school care workers and youth and home educators were combined, standardized and the field of activity significantly expanded.

On average, nine children are currently being looked after by one pedagogical specialist in kindergarten (as of 2017).

However, educators are not only qualified to work with children, but can also work with young people, adults or disabled people of any age, whereby an individual focus can be set partly by choosing the training facility or internship , but this is not binding for further professional development is.

The ISCED classification is 4A or, if the course has more than 2,400 teaching hours, 5B.

The German Qualifications Framework (DQR) classifies a “state-approved educator” in DQR qualification level 6 if the training comprises at least 2,400 teaching hours and 1,200 hours of practical experience. The DQR is of an advisory nature.

Depending on the federal state, the training takes place at technical schools for social pedagogy , specialist academies for social pedagogy , high school centers or vocational schools for social affairs or vocational colleges and is therefore school-based training that can be promoted according to the laws of the Advancement Training Assistance Act . It is also offered part-time by independent providers . State recognition as an educator can also be obtained after successfully completing the non-pupil examination after self-study .

The duration of the training varies, depending on the country and previous education or practical experience, between two and five years. In some federal states, the training is divided into a one to two year pre-study internship with theoretical components followed by a two-year full-time school visit and a final year of recognition . Other German countries regulate training through purely school-based training with integrated, longer-lasting internships. For individual federal states, prior training as a social assistant or nanny is mandatory for admission to the corresponding school .

In many countries, additional courses can be used to obtain the advanced technical college entrance qualification or the Abitur . 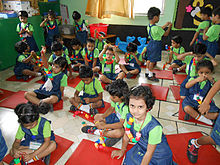 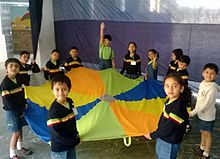 The content of the training varies greatly from region to region and can include the following subjects, possibly in combination with one another or across subjects:

Pedagogy , psychology , sociology , didactics and methodology of socio-pedagogical practice, special pedagogy or curative pedagogy , children's and youth literature, youth law and family law , media education , music education , movement theory, rhythm , basic medical knowledge or health theory, art and craft education, political and social aspects , Religious teaching or religious education as well as practical guidance, for example in conducting discussions or forms of supervision. During the training, the profile of the school or the selection of internships can be used to specialize in a certain field of practice or a certain clientele, such as work in kindergarten , in after-school care or in the area of home education .

The training ends with state recognition, which - despite the differences in training courses - is recognized by all federal states.

As part of the training, the following core social pedagogical competencies must be qualitatively increased:

Trained educators have various options for further training after completing their training, during or before their first professional experience. A distinction is made here between specialization training and advancement training. Specialization courses serve to adapt knowledge to the actual activity, for example if a certain area within the training was not a focus. Advancement training serves to qualify for activities that are located at the organizational or management level, for example the management of a socio-educational institution, or for activities that have their own, different professional title, for example motopädin / motopädin .

In terms of advancement training, educators can consider further training (with certification degrees) on the one hand, and part-time study programs on the other.

The offers with a continuing education character include (selection):

For some years now, it has also been possible to take (part-time) courses that specialize in the further academic qualification of educators. Offers with very different emphases can be selected (selection):

Examples for the focus on (early) education:

Examples of focus management and leadership of educational institutions:

The fields of activity of educators are very diverse. Above all, they include the supervision, upbringing, education, care and care of children and young people. In addition, there is cooperation with parents , teachers and other contact persons for clients and offices (especially the youth welfare office ) and, in the case of church sponsors, also with the church community .

The participation of the children (participation according to their age and level of development) must also be taken into account in all activities. In addition, since PISA / IGLU and the educational plans of the federal states, the educational mandate of the respective institution has moved more into focus. In the area of ​​day-care centers in particular, children should be explicitly supported in their self- education processes.

The job prospects vary from region to region. Abroad, trained educators and interns can work in German-speaking kindergartens. Despite falling birth rates , the need for educators is increasing due to the conversion from half-day to full-day schools and the expansion of preschool childcare options, so that there is a shortage of educational staff in some regions.

Educators in a European comparison

All graphics are based on data from the articles “Childcare - Daycare is no fun either” and “Neighboring countries pay that much - being an educator is not worthwhile”.

According to the nationwide applicable TVöD-SuE, educators who are employed in a facility of a communal provider are either grouped into pay groups S6 or S8. Private providers decide for themselves whether the payment of an educator is based on a collective agreement such as TVöD-SuE, TV-AVH, etc. or whether their own payment model is used. More details on payment can be found in the article Social and educational services .

In 2014, full-time educators in western Germany earned an average of 2953 euros gross, in eastern Germany 2765 euros. The average wage is significantly lower, as kindergarten teachers mostly work part-time. The median gross income in 2000 was EUR 2,245; in 2010 it was EUR 2,630. According to the FAZ, educators in Germany typically earn between 2,300 and 3,600 euros gross per month, depending on their professional experience, position and location (as of May 2015).

Since 2008, the Bertelsmann Stiftung has been regularly investigating the early childhood education, care and upbringing systems in Germany based on statistical data from the federal and state governments. In a comparison between 2013 and 2019, the childcare ratio improved nationwide from an average of 9.6 to 8.9 children (for children under three from 4.6 to 4.2). In 2019, Baden-Württemberg led the way , in which the experts found the required childcare ratio of 1 to 7 (for children under three, from 1 to 3), while in Mecklenburg-Western Pomerania , for example, there were twice as many children for one educator. In general, the childcare ratio is better in the west than in the east.

In Switzerland, a similar training is as Dipl. Children educator / -in HF offered.

For the care of children in the day nursery, a qualification “from a higher school with an educational focus” is required. After five years of study in educational science, you can become an educator.

The gross salary ranges between around 20,000 euros (1,667 euros per month) in the first year of employment and around 28,000 euros (2,333 euros per month) with 35 years of professional experience. "Elementary school teachers earn the same salary", while teachers at the grammar school earn "up to 5,000 euros more per year".

The école maternelle is regarded as preparatory to school attendance. Children from the age of two can attend the école, from the age of three every child goes to the école. The care is free of charge. Parents pay additional services “like longer care in the afternoon” out of their own pocket.

Assistants have completed training. After studying (including a special course in early childhood education), the instituteurs or professeur des écoles can teach in both primary and kindergarten.

Job starters earn around 2,000 euros per month and up to “3,200 euros after 30 years of professional experience”.

The municipalities must offer a place in a förskolor for every child between the ages of one and five . Working or studying parents must be offered a place by the responsible municipality within four months of registering. The parental contribution is set by the municipality, whereby the contribution may not exceed 3% of the income or € 140 per month.

Assistants have graduated from high school in education. You become a Förskollärare (pre-school teacher) and thus a pedagogical specialist after five years of study.

A state full-time daycare place costs the parents 920 to 1,600 pounds (in September 2015 this corresponds to around 1,250 to 2,170 euros) per month. If the child is three years old, the parents receive 15 free hours per week. The child starts preschool at the age of four.

Many daycare educators have completed a one-year course system at a vocational school. An alternative career as a very well paid nanny for rich elites depends on the reputation of the (private) college attended. A year at college can easily cost up to 17,000 euros.

Educational institutions are among the oldest social institutions, for example in the form of orphanages. Later, reformatories and workhouses added, which were primarily the custody and punishment. In bourgeois houses, educators were also employed to look after and educate the children. With the bourgeois Enlightenment, a glorified image of childhood was represented from today's point of view and the attitude that with upbringing you can make practically anything out of a person. With this in mind, the kindergarten was developed as a new institution.

Up until the 19th century, public education was often so cruel that it would now be criminalized as abuse. With the reform pedagogy of the early 20th century, a new direction gradually emerged. The upbringing should start from the child. Later, anti-authoritarian and democratic approaches to education were developed. Until the 1960s, educators were almost exclusively employed in kindergartens and after-school care centers. In the period that followed, the training was introduced nationwide with the qualification of state-recognized educators , and the possible areas of application expanded significantly.