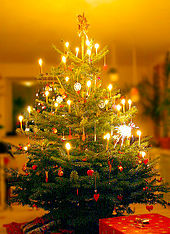 The Christmas Eve on Dec. 24 , and Christmas Eve or Christmas Eve called, which is the eve of Christmas celebrations (celebration of the birth of Jesus Christ ); in many places the whole day before is also called this. In the evening, gifts are traditionally given in Germany , Switzerland , Liechtenstein and Austria , among others . The night from December 24th to 25th is called Holy Night or Christmas Eve . 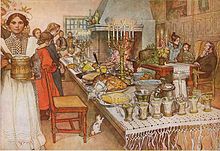 According to the ancient calendar, the day ended with sunset , so the evening of December 24th liturgical already belongs to Christmas Day. In Europe, the family Christmas party with gifts and festive meals has shifted more and more to the evening or the afternoon of December 24th. In the Orthodox Church, however, December 24th is still the last day of the pre-Christmas Lent , so traditionally a meal without animal products is eaten. The festive dinner will take place on December 25th.

In Poland , Christmas Eve is called Wigilia , on which specifically Polish customs are celebrated. Folk customs are partly fused with Christian traditions, such as breaking special Christmas wafers (Bożenarodzeniowe opłatki) among those present and a meatless traditional 12-course menu.

The festival is usually celebrated with the family. As a rule, the giving of presents follows first and then the Christmas Eve dinner, but it can also be the other way around. In Germany it is widespread custom to eat potato salad with sausages or meatballs or a similarly simple meal, but more elaborate dishes such as goose , carp or Schäufele with potato salad and lamb's lettuce are also common. In many families, attending a church service is part of the ritual, either in the late afternoon ( Christmas vesper , nativity play ) or at night ( Christmas mass ), even for non-churchgoers. The services on Christmas Eve are therefore among the best attended throughout the year in all denominations .

The times of the hour of the hour including the Non and the celebration of mass in the morning are the last services of the Advent season . The Christmas season begins with the first Vespers of Christmas. The day applies - depending on the location - up to Vespers or the nightly Christmas mass as a fast or abstinence day . The custom of fasting is preserved as a church law in some countries; in the area of ​​the German Bishops' Conference it is voluntarily maintained by some.

Locally, the time of Christmas mass was brought forward from midnight to the evening hours. At sunset in the late afternoon, “children's christmets” and nativity plays take place in many places . According to the new liturgical regulations, however, the Christmas mass should take place at night, since it is a night watch.

December 24th is not a public holiday in Germany , Switzerland , Liechtenstein and Austria in the sense of rest from work ( working day ). In most state laws, it is set as a silent day from the afternoon or evening hours .

Many of the holiday laws of the German federal states stipulate for Christmas Eve from 2 p.m. that only music appropriate to the character of the day may be played in restaurants.

In Europe , December 24th is a public holiday in the following countries: Bulgaria , Estonia , Lithuania , Slovakia , Sweden , the Czech Republic and the Republic of Cyprus .

In 1914, around 100,000 soldiers on the Western and Eastern Fronts of World War I laid down their weapons in an unauthorized truce for Christmas . This Christmas peace lasted for a few days.

In the years 1940 to 1943, the Großdeutsche Rundfunk instrumentalized Christmas Eve with propagandistic Christmas ring broadcasts to “connect the front and home”.

From 1952, on Christmas Eve, candles were lit in the windows of many houses. The then ruling mayor of Berlin , Ernst Reuter , had called for this way of commemorating the prisoners of war who had not yet returned home after the end of the war. After the construction of the Berlin Wall , the custom was revived in 1962 by a call from the Kuratorium Indivisible Germany to show solidarity with the Germans in the GDR .

The custom of putting a burning candle in the window on Christmas Eve has been practiced again since 1986. In Rome, the Pope appears at 6 p.m. at the window of his private apartments and lights a candle with the Lumen de la Pace ('Light of Peace'), which was lit by scouts in the grotto of Jesus Christ in Bethlehem in the run-up to Christmas and passed on in lanterns to make it shine in the windows on Christmas night.

According to Jewish tradition, there are special customs for Christmas ( Nittel Nacht ) in some communities .

The colored boxes indicate the preferred liturgical color for the respective festival. For the end of the church year, see, for example, the pericopes of the Evangelical Church in Germany or the Calendarium Romanum Generale for the Roman Catholic Church .