Board of Trustees Indivisible Germany

The Kuratorium Indivisible Germany - Committee for Questions of Reunification eV was an organization founded in 1954 in the Federal Republic of Germany with the aim of keeping alive the idea of German unity and striving for reunification “in freedom” - for a long time including that of Poland since 1945 and the Soviet Union administered former eastern territories of Germany. After the reunification , the board of trustees dissolved in 1992. 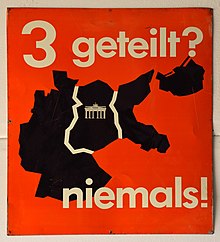 Board of Trustees poster

The Board of Trustees was founded on June 14, 1954 in Bad Neuenahr . The members included people from politics, business and social life. Important impetus came from Jakob Kaiser , Minister for All-German Issues . Gustav Dahrendorf , Hermann Ehlers , Ernst Lemmer , Arno Scholz , Louise Schroeder , Paul Sethe , Hans Zehrer , Herbert Wehner and others were among those who signed the appeal . The name of the organization was proposed by Federal President Theodor Heuss . Konrad Adenauer was rather negative about the establishment, as he viewed it as a criticism of his policy of ties to the West .

The board of trustees was non-partisan and was divided from the federal through the state down to the local level. With the help of political campaigns and forms of symbolic politics, the organization tried to work towards its goal. The Board of Trustees organized commemorative events for the uprising of June 17, 1953 in many cities and communities . For a number of years, the popular call to put candles in the windows at Christmas to remind people of unity was popular. Posters were printed with the request “Think about it” and the dispatch of parcels to the GDR was organized. Another well-known poster of the board of trustees showed the divided Germany within the borders of 1937 with the slogan “3 divided? Never! ”As a symbol of the demand of the board of trustees“ Open the gate ”, a pin with the Brandenburg Gate was widely used.

Since the late 1960s, the board of trustees has been increasingly criticized in view of the political and social changes as a result of the student movement and the new Ostpolitik because of its strict rejection of the communist dictatorships in Eastern Europe , and its influence has clearly lost Internally, there were conflicts between a minority who, like Chairman Schütz, supported Willy Brandt's course , and the majority of opponents of the new Ostpolitik. Since the 1980s at the latest, the Board of Trustees has not played a significant role in public.