Sethe studied art history, history and German literature. He interrupted his studies to work as an editor in Ohligs in the Rhineland . In 1932 he received his doctorate at the University of Bonn with the work The Missing Sea Battle - A consideration of the English naval command 1911–1915 . After the seizure of power of the Nazis , he wrote in 1933 on the occasion of Hitler's birthday a hymn in which he described Hitler as those "have been waiting for the best of us long." From 1934 until it was banned in 1943, he was editor of the Frankfurter Zeitung , for which he also worked as a war correspondent from 1940 . He was a member of a propaganda company of the Waffen-SS or Wehrmacht. He then became editor-in-chief at Frankfurter Anzeiger and, since the spring of 1944, has also worked for the Völkischer Beobachter . After the Second World War he was a member of the Badische Zeitung in Freiburg im Breisgau .

Sethe was next to Hans Baumgarten , Erich Dombrowski , Karl Korn and Erich Welter one of the five founding editors of the Frankfurter Allgemeine Zeitung between 1949 and 1955. He announced his resignation because his co-editors did not share his opposition to Konrad Adenauer's foreign policy . From 1955 to 1960 and from 1962 to 1965 he was editor-in-chief and political head of the newspaper Die Welt , later he wrote for Die Zeit and Stern .

Sethe was considered conservative and wrote primarily about German politics and German history. He was a critic of Konrad Adenauer's foreign policy and advocated rapprochement with the East. Sethe was one of the leading journalists of the post-war era. He regarded his profession as the “conscience of the nation”. 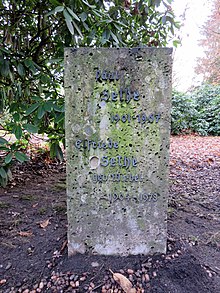 His most famous saying comes from a letter to the editor in Spiegel on May 5, 1965: “Freedom of the press is the freedom of two hundred rich people to spread their opinions.” There it also said: “Since the production of newspapers and magazines requires ever greater capital, the circle of people who publish press organs is getting smaller and smaller. This makes our dependency ever greater and ever more dangerous. ”He knows that there are oases in the German press,“ where the air of freedom still blows, [...] but how many of my colleagues can say that about themselves? ” Sethe states that “he is who is rich. It's not from Karl Marx, but from Paul Sethe. ”Since journalists are not rich, they are not free either.

In addition to his journalistic activities, Sethe wrote a number of books and historical studies. The book Fateful Hours of World History appeared as early as 1952 , in which he reported on the foreign policy of the great powers in a kind of time-lapse style. In the spring of 1957 Sethe appealed in an article to the Soviet Union to understand the West German position on the reunification issue. The article was published in the semi-official Moscow newspaper Meschdunarodnaya Shizn .

A nephew was the journalist Helmut Sethe (1929–1983), who for a long time was editor-in-chief of the Husumer Nachrichten .