The Völkischer Beobachter (VB) was the NSDAP's journalistic organ from December 1920 to April 30, 1945 . In sharp distinction to bourgeois newspapers , the VB described itself as a "Kampfblatt" and was programmatically more interested in agitation than in information. Press historians therefore called the VB “poster-like” and its style “spoken more than written”. Initially, the VB appeared twice a week, from February 8, 1923 daily in the Franz-Eher-Verlag in Munich . After the early years he was expelled across the empire . 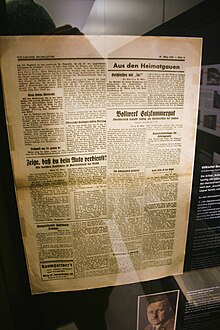 Edition of the Völkischer Beobachter in Mauthausen

The “Kampfblatt der National Socialist Movement Greater Germany” emerged from the suburb of Munich Observer , founded on January 2, 1887 with a volume of four pages , which was taken over by publisher Franz Eher in 1900 , but remained politically insignificant. The publishing house was in an unrepresentative, three-story building at Thierschstrasse 11 near Munich's Isartorplatz. In 1918 the paper passed into the possession of the Thule Society after Eher died on June 22, 1918. The “ ethnic ” anti-Semite Rudolf von Sebottendorf acquired the publisher's license for the newspaper from his widow Friederike Eher for 5,000 Reichsmarks and from July 1918 also took over the editorial management . The newspaper initially kept its title, supplemented by the subtitle Sportblatt . On September 14, 1918, Sebottendorff's wealthy friend Käthe Bierbaumer from Freiburg im Breisgau was entered in the commercial register as the owner of the Franz Eher Nachf publishing house . On September 30, 1919, it became the "Franz Eher Successor GmbH". The shareholders were Käthe Bierbaumer and Sebottendorff's sister Dora Kunze. In August 1919, the name was changed to Völkischer Beobachter . With a print run of around 7,000 copies, the paper accumulated debts of 250,000 marks by the end of 1920 and was facing bankruptcy.

On December 17, 1920, the NSDAP acquired the then ailing paper for 120,000 marks. After the entry in the commercial register, in addition to Adolf Hitler , the main shareholders were again Sebottendorff's sister, Dora Kunze, and Sebottendorf's lover Käthe Bierbaumer, who later also belonged to Hitler's financial patrons personally. The following day, the VB publicly operated as the NSDAP's party newspaper. The purchase was financed through the mediation of the anti-Semitic writer Dietrich Eckart by Major General Franz Ritter von Epp , who provided a loan of 60,000 marks, apparently from a secret fund of the Reichswehr to support right-wing extremist organizations. The first editor-in-chief of the newspaper appointed by the NSDAP was Hugo Machhaus (December 25, 1920 to May 15, 1921), briefly followed by Hermann Esser (May 15, 1921 to August 12, 1921), before Eckart himself took over the management from August 12, 1921 the editorial team took over. Hitler himself wrote numerous articles up to 1922, but was only rarely active as an author later. He remained editor until April 30, 1933. The work space at Schellingstrasse 39/41 in Munich-Schwabing was made available by the Munich book trade house M. Müller & Sohn .

Since the publisher had the VB printed on a used American rotary press from August 29, 1923, the sheet had a conspicuous, oversized format. In addition, the main headline underlined in red and the headline in antiqua type differed visually from other newspapers. The print run of the paper was initially around 8,000 and increased to 30,000 by autumn 1923 , due to the strong demand during the occupation of the Ruhr . On September 27, 1923, the VB printed anti-Semitic attacks against Chancellor Gustav Stresemann and the head of the army command, General Hans von Seeckt, and their wives under the title “Die Dictatoren Stresemann - Seeckt” . Reichswehr Minister Otto Geßler , who was given executive power due to a nationwide state of emergency, then ordered the newspaper to be banned. The Bavarian State Commissioner Gustav von Kahr and the Munich military district commander Otto von Lossow refused to implement this. This refusal to give orders contributed to the escalation of the conflict between the Bavarian and Reich governments.

Due to the party ban of the NSDAP as a result of the Hitler putsch on November 9, 1923, the newspaper had to stop its publication, with the re-establishment of the NSDAP on February 26, 1925 it appeared again. Since February 1, 1927, the Völkischer Beobachter was delivered in a Reich and a Bavaria edition. The circulation stagnated below 20,000 by 1929, grew to almost 40,000 by 1930 and reached the 100,000 mark in the Reichstag elections on September 14, 1930, making the VB one of the largest German newspapers.

Self-advertisement in the southern German edition of the Völkischer Beobachter from February 25th and 26th, 1933

From March 1930 a "Berlin Edition" was also distributed, but was discontinued on March 15, 1931. The daily journey from the print shop in Munich to Berlin turned out to be too long and made the paper uninteresting for readers on the Spree in terms of time and content. In 1932, however, an own printing house was set up in Berlin's Zimmerstrasse, in which two further regional editions were produced from January 1, 1933: a north German and a Berliner. There was also a southern German and from 1938 a Viennese edition (editorial staff: Seidengasse  3–11, Vienna- Neubau ).

As of February 1941, the VB gave up the Fraktur typeface that had been commonly used in Germany until then and was set entirely in the modern Antiqua , which the National Socialists described as "tasteful and clear" and which was supposed to correspond to the "global status of the Reich" claimed by the propaganda ( Antiqua Fraktur dispute ). The circulation increased enormously with the success of the National Socialist movement, in 1931 it reached over 120,000, exceeded the million mark in 1941 and is said to have amounted to 1.7 million copies in 1944.

A few days before the German surrender , the Völkischer Beobachter stopped its publication at the end of April 1945. The last edition of April 30, 1945 was no longer delivered.

Since April 1922 the Reichsleiter of the NSDAP for the press, Max Amann , was the managing director .

The income from sales alone did not carry the sheet. It held on by selling interest-free promissory notes to party members and received loans and grants from wealthy patrons such as Helene Bechstein . The financial backbone was later the book publisher, which Amann had successfully expanded. The " Illustrierte Beobachter " founded in 1926 was also a success. In addition, the supporters were repeatedly reminded of their duty to become subscribers and to advertise such.