Suðuroy ('South Island', [ ˈsuːvʊrɔɪ / ˈsuːrɪ ], Danish : Suderø ) is the southernmost and fourth largest island in the Faroe Islands . Only the Sumbiarsteinur archipelago is further south.

Suðuroy forms a separate region of the Faroe Islands, which also includes the uninhabited island of Lítla Dímun . The strait Suðuroyarfjørður , the South Island Fjord, which is actually a sound, runs between the two islands and separates Suðuroy from the rest of the archipelago in the north.

Most of the places on Suðuroy are located on the east coast, while the west coast rises steeply from the sea and has comparatively easily accessible bird rocks .

The most important place besides Tvøroyri with its coalesced settlement area at Trongisvágsfjørður is Vágur further south (not to be confused with the island of Vágar ).

In the north there are the idyllic fishing villages Sandvík and Hvalba . From here you can enjoy a view of the smallest and uninhabited island in the archipelago: Lítla Dímun , which belongs to the farmers of Hvalba who are known for their hard work.

Porkeri east of Vágur is considered one of the most beautiful villages in the Faroe Islands. In Hov, north of it, once lived the god Havgrímur . His burial mound is a testimony to the Viking Age in the Faroe Islands . In Fámjin on the west coast not only the first depends Flag of the Faroe Islands , but here is the Fámjinsstein a rune stone from the 16th century - proof that here the runic script was applied even after the Reformation.

With the Sumba south offshore archipelago group Munkurin the Faroe border into the south. The Akraberg lighthouse forms the southernmost point of the South Island itself and the southernmost point that can be reached by visitors. An enclave of Frisians once lived here, who are said to have been pirates or leftover pagans. The next country on the longitude would be the Scottish Hebrides , which the Faroese call Suðuroyggjar (South Islands). Already in the Faroese saga there was Einar from the South Islands , who lived on Suðuroy, but apparently came from the Hebrides or the Isle of Man .

Almost nowhere in the Faroe Islands can you experience the dramatic landscape so closely as here in the south around Beinisvørð on the steep west coast. Those who come in June or July can particularly enjoy the Faroese bird life .

The geological feature of the archipelago, which is otherwise poor in natural resources, is the coal deposits on Suðuroy (near Hvalba in the north). Even today, around 1000 tons of coal are mined annually from the only remaining coal mine in the Faroe Islands. The highest level of coal production in the Faroe Islands in one year was reached in 1958 with a production volume of 18,000 t. Below the coal layer are the oldest basalt layers in the Faroe Islands, which form the south of the island. It is now known that oil and natural gas are stored here under the shelf . The planned development of these mineral resources would possibly bring the Faroese full sovereignty. It therefore seems likely that there will be oil rigs off Suðuroy in the medium term .

Due to the somewhat remote location, an own dialect of Faroese was able to develop here . The Faroese tightening , for example, has a different vowelism, and so a Jógvan is called here [ ˈjɔgvan ] and not [ ˈjɛgvan ].

The place names in the very south of the island still bear witness to the Celtic "natives", and it is certain that the first people settled here with the Irish monks .

It is also otherwise said that the people of Suðuroy are a special breed. From the ages it is seafarers and fishermen who ascribe themselves a different mentality than the compatriots in the north (especially the “rivals” on the north islands ), who are more rural.

The social democratic Javnaðarflokkurin has her traditional stronghold on Suðuroy. Names like Petur Mohr Dam and his son Atli P. Dam stand for this .

In the southernmost area around Sumba , the Faroese chain dance is cultivated in a uniquely expressive form. The poet Poul F. Joensen (1898–1970), who is in the old poetic tradition of this place and whose satires are still popular today , comes from here . 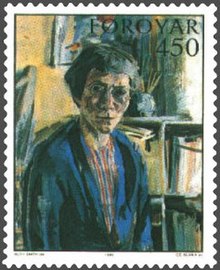 Ruth Smith : Self-Portrait. She drowned in 1958 while bathing in her native Vágsførður and is one of the most important artists of the Faroe Islands.

The painter Ruth Smith (1913–1958) from Vágur is known beyond her home country. Her self-portraits are counted among the most important works of Scandinavian art of the 20th century. In her hometown is the Ruth Smith Museum.

The art of building the Faroe Islands is cultivated as the greatest national handicraft heritage. Today's largest Faroe boat is the Naddoddur from Tvøroyri, a proud 12. Tvøroyri is also considered the birthplace of football in the Faroe Islands . The first ball was kicked here as early as 1889 and the country's first football club, TB Tvøroyri, was founded in 1892.

Every year there is Jóansøka ( Midsummer Night ) as the central sports, culture and music festival, alternating between Tvøroyri (odd years) and Vágur (even years) around June 24 . This festival is the highlight of the year on Suðuroy and is therefore also attended by people from other parts of the Faroe Islands.

Suðuroy is served by the car ferry Smyril from Tórshavn . A new ferry, the Smyril V, has been in service on this route since October 2005. It cuts the journey time from Tórshavn to Tvøroyri by half an hour. At the same time, it is hoped that the much larger and more modern ferry will bring more economic progress. Due to its size and striking landscape, Suðuroy is also a popular holiday destination for the Faroese themselves. One of the special features are the five small forests or parks, of which the Viðarlundin inni í Trongisvági near Trongisvágur and the Viðarlundin á Vági in Vágur are the largest.

The road network of Suðuroy is very well developed and characterized by serpentines in the south, while tunnels have been drilled into the mighty rocks of the north.

See also: List of tunnels in the Faroe Islands