The association (fully: Tvøroyrar Bóltfelag ) was founded on May 13, 1892 in Tvøroyri on the island of Suðuroy .

The then student Poul Effersøe von Suðuroy (* 1871 in Trongisvágur , † 1926 in Tórshavn , later a lawyer) is considered the Faroe Islands' football pioneer. After graduating in Denmark in 1889, he returned to his home island and made the game known there. The association was founded three years later. HB Tórshavn and KÍ Klaksvík did not follow until twelve years later, in 1904 .

TB Tvøroyri is one of the most well-known and long-running most successful football clubs in the Faroe Islands. Especially at the beginning of the championship, which has been played since 1942, the club was able to enter the annals time and again as champions or cup winners.

In the 20 years between 1942 and 1962 the club was four times champion, five times runner-up and was able to win the Faroese Cup four times.

This glorious epoch was followed by a gradual decline when major successes began to wane between 1962 and the founding of the Faroese Football League (today Betrideildin , previously 1. Deild ).

With the beginning of the 1. Deild in 1976 , which consisted of seven teams, TB Tvøroyri experienced the most successful phase in its history. The club was the first champion of the newly founded league and was always among the top two teams until 1982. In addition, TB made it to the cup final three times in these six years.

However, TB Tvøroyri would never be able to continue this great era in the club's history. A last championship title in 1987 made one sit up and take notice. But in the following year, the 1st Deild was increased to 10 teams and the defending champion had to relegate in 1988 when he was ninth in the table for the first time in his history. The relegation could not have come faster: from master to relegated within a year.

At the end of 2007 there were considerations to merge the teams from the island of Suðuroy. While the members of Royn Hvalba voted in favor, the members of TB Tvøroyri decided against the merger. In 2009 and 2010 the club took third place in the 1st Deild , after having missed promotion to the Vodafonedeildin three times in a row as fourth place . In 2011, the promotion seemed to be missed again when before the last match day against the same point team from AB Argir there was a six goals worse goal difference, with an 11-0 win against EB / Streymur II and a 6-1 win from AB Argir against FC Hoyvík this deficit could be evened out and the promotion achieved through the more goals scored. The decisive goal for TB came from a penalty in the sixth minute of stoppage time. In the first division only because of the more goals scored against B68 Toftir , who were both equal on points and had the same goal difference, the relegation. In the direct duel on the last day of the game, B68 was only missing one goal in the 4-1 away win to avoid relegation. A year later, TB took a ninth place in the final table and moved into the second division, in which first place was sovereignly occupied, with which the promotion was successful.

At the beginning of 2017, TB Tvøroyri merged with FC Suðuroy and Royn Hvalba to form the club TB / FC Suðuroy / Royn , which competed in the Betrideildin . At the end of 2018, the merger was dissolved again.

TB Tvøroyri played at the Sevmýri stadium until the end of 2010, but in 2011 they moved to Á Skørðunum in Hvalba . Since April 2012, the games have been played in the newly built við Stórá stadium , which is located in Trongisvágur . TB won the opening game on April 29, 2012 1-0 against ÍF Fuglafjørður . 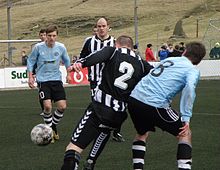 TB Tvøroyri (black and white) in the game against Víkingur Gøta (light blue) 2012.

The record player in the first division is Óli Johannesen with 194 games. Henrik Thomsen scored the most goals in the Betrideildin with 73 (as of the end of 2019).

As a founding member of the 1st Deild, the women's team of TB only played one season in the top division and was able to achieve only one victory. As a result, in Group A the last place was occupied, which resulted in relegation.

TB Tvøroyri's volleyball division was only successful with women. In 2002 the double of the championship and the cup was achieved, followed by three more cup wins and the second championship in 2014/15. There was no team for the men last season.