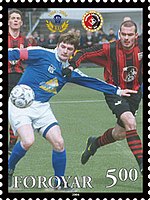 Originally, KÍ was founded on August 24, 1904 in the town of Klaksvík as a tennis club . KÍ played his first football game away against HB Tórshavn in 1911 and lost 5-0. Since the existence of the Faroese championship (1942) and the first division (1976), KÍ did not suffer any relegation until 2009, and in 2010 the team played in the second division for the first time. KÍ has around 900 members, of which around 400 are active.

The KÍ considers its fans to be the most loyal in the archipelago. In 2001 a KÍ fan club was even founded in the hometown of arch rival HB Tórshavn. Along with record champions HB, KÍ is the second most successful team in the first Faroese league : the kickers have brought the trophy to the North Islands 17 times .

Perhaps the most dramatic was the decisive win in 1972 in the last game of the season on the opposing pitch in Tórshavn . HB achieved the same feat in Klaksvík the year before. But 19 years passed before KÍ won the league title again in 1991 - with the then 19-year-old striker Todi Jónsson . For Jónsson this was the beginning of a great football career. In 2010 KÍ Klaksvík rose four points behind to eighth place for the first time from the first division, in the following year as second-placed the 1st Deild succeeded in direct promotion. 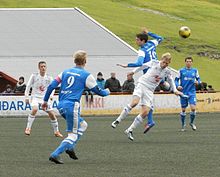 On August 24, 1995 KÍ Klaksvík won a European Cup game as the first team in the Faroe Islands .

The record scorer in Europe is Olgar Danielsen with five goals.