The Faroese Football Championship is played in the first division of men's football in the Faroe Islands . It was founded in 1942 and was called Meistaradeildin ( German  champions league ) until 1975 , 1st Deild (German: 1st league ) from 1976 to 2004 and Formuladeildin from 2005 to 2008 after its main sponsor, the Faroese IT company Formula . From 2009 to 2011 Vodafone acted as namesake of Vodafonedeildin . After the departure of the main sponsor, the energy company Effo was announced as a new sponsor on February 27, 2012 , so that the league will bear the name Effodeildin for the next three years from the 2012 season . On December 15, 2017, Betri Banki was presented as the new sponsor, so that the league has been called Betrideildin since the 2018 season . The term is initially valid until 2022.

In addition to the Betrideildin, there is the 1st , 2nd and 3rd Deild (corresponds to the 2nd, 3rd and 4th league) and the 1st and 2nd Deild for women . 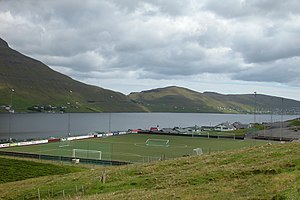 The home of second division team Skála ÍF in Skála .

In the Meistaradeildin , founded in 1942 , the champion was determined in qualifying games in the early years, and in 1943 the maximum number of twelve teams played. Regular participants were B36 Tórshavn , HB Tórshavn , KÍ Klaksvík , MB Miðvágur , SÍF Sandavágur and TB Tvøroyri, and from 1943 SÍ Sørvágur and VB Vágur . It was not until 1947 that a closed amateur league was established, in which all the aforementioned teams took part except for TB Tvøroyri. Each team played once against each other, promotion and relegation was not yet regulated in the Meistaradeildin . In 1948, MB Miðvágur, SÍF Sandavágur and SÍ Sørvágur no longer took part in the game operation, with the latter team the game operation almost came to a standstill due to the fishing carried out in the summer months, which is why regular games could no longer be guaranteed. Instead, the B teams from B36 Tórshavn and HB Tórshavn took part, at HB also in the following year. From 1949 TB Tvøroyri was again a permanent member of the league, so that from 1950 five teams played against each other for the first time twice to determine the master. This mode as well as the league composition was largely maintained until 1970. Exceptions were the years 1951, 1953–55 and 1960–65, in which VB Vágur did not participate in the league. In 1964, after KÍ Klaksvík withdrew, there were only three participants who competed against each other once. From 1971 ÍF Fuglafjørður took part for the first time , so that now six teams were playing for the title in the league.

After the first Deild was introduced in 1976 with seven teams and a permanent relegated team, each team continuing to play twice against each other, the increase to eight teams took place three years later. That's why there was no relegation in 1978. In 1988, the next expansion to ten teams was carried out with from then on two permanent relegated teams, which is why relegation was suspended again the year before. In the 1991 season, the clubs were able to qualify for the first time for the European Cup , which was played in 1992/93, via the league and cup placement . In 1995, the three-point rule was introduced in the 1st Deild , and from this season there was a relegation game of the ninth-placed against the runner-up in the 2nd Deild . In 2001, when the points were equal, the direct comparison between the teams involved was introduced as the first decision criterion, but was abolished again in 2006. Since then, as before, goal difference and goals scored are the first criteria. From 2005, at the same time as the name was changed to Formuladeildin after the new main sponsor, the number of league games was increased to 27, so that each team plays three times against each other. By 2016, the five teams with the highest points from the previous season played 14 home games, the other teams 13. In the following year, the relegation game was also abolished and there have been two more permanent relegations since then. In 2009, after a change in the main sponsor, the company was renamed Vodafonedeildin . The naming rights were initially granted for the next three years. In 2012, after Vodafone left, the company was renamed Effodeildin for the next three years. The league has been called Betrideildin since 2018 .

In the Betrideildin , each team plays against each other three times on 27 match days. Since 2016, five drawn teams have played 14 home games, the other teams 13. The team with the highest points at the end of the season is champions of this league, the last two teams are relegated to the 1st Deild , provided that the two potential promoters are among the top three teams . If there is a tie, a decision will be made based on the goal difference and then on the goals scored. If there is still a tie after that, a playoff will be played on a neutral pitch. Due to the placement in the UEFA five-year ranking , the champions are entitled to qualify for the Champions League and the runners-up and thirds in the table are entitled to qualify for the UEFA Europa League . The cup winner will also take part in qualifying for the UEFA Europa League. If this is also the Faroese champion, the cup finalist will take part in qualifying for the UEFA Europa League instead. If the cup winner is in second or third place at the end of the championship, the fourth-placed will advance to the UEFA Europa League.

If a player receives five yellow cards in the course of a season , they are suspended for the next league game. If there are two more yellow cards, the league will be banned again. If a player sees the red card in a league game , a ban will be issued for at least one competitive game, depending on the severity of the offense. It does not matter whether the next match is a league or a cup game.

Until 2007, the clubs could sign players at any time. The clubs have been tied to two transfer windows since 2007. The first ends at the end of February, the second takes place during the summer break between the end of June and the end of July.

Since 1947, the teams in the first division have been looked after by 187 different coaches, of which 85 (45%) were Faroese. The largest foreign contingent was made up of the Danes with 43 trainers (23%), followed by the Icelanders with 16 trainers (9%) and the Serbs and Yugoslavs with 14 trainers (7%).

In 2009 the television rights for the next four years for the record sum of 64 million DKK were awarded to the sports rights agency Kentaro . Previously, the rights were held by Sportfive , which paid around DKK 11 million.

Usually local referees lead the games. As of the end of the 2019 season, the active referees with the most appearances in the first division are Eiler Rasmussen (316 games) as well as Petur Reinert (299) and Dagfinn Forná (271). Since 2005, individual games have been refereed every season by foreign referees, who, apart from the Brazilian referee Alex Troleis, who lives in the Faroe Islands and who has meanwhile become naturalized, come exclusively from the Nordic countries . This was previously the case in 1991.

Among the teams, HB Tórshavn was the top scorer most often with twelve titles. The other multiple successful teams are NSÍ Runavík with eight, B68 Toftir and GÍ Gøta with six each, B36 Tórshavn with four, EB / Streymur, ÍF Fuglafjørður, KÍ Klaksvík, TB Tvøroyri and Víkingur Gøta with three each and VB Vágur with two titles.

2Under the British occupation there was a shortage of soccer balls, which is why no championship could be played.

The following is a list of the players with the most stakes in the competition since 1978. Players marked in bold are still active. If there are several clubs, the current club is marked in bold. 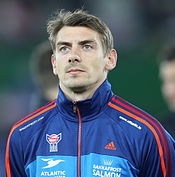 Below is a list of the most successful goal scorers in the competition since 1968. Players marked in bold are still active. If there are several clubs, the current club is marked in bold. 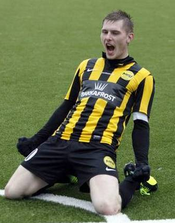 Placement in the UEFA five-year ranking ( previous year's ranking in brackets ). The abbreviations CL and EL after the country coefficients indicate the number of representatives in the 2019/20 season of the Champions League and the Europa League .

National championships of the UEFA associations