B68 Toftir , full name Tofta Ítróttarfelag B68 shortly B68 , is a Faroese football club based in Toftir on the island Eysturoy .

The association was unofficially founded in 1962 , but its official founding date is December 21, 1968 . After promotion to the highest Faroese league, the 1. Deild in 1981, the football club was able to win the Faroese football championship, called føroyameistaraheiti , in 1984, 1985 and 1992 . In addition, B68 was in the 1995 cup final , but lost to HB Tórshavn 1: 3. At the end of 2004, the club rose from bottom of the table in the 2nd Deild. After the immediate resurgence, the second last to relegate in 2006. B68, however, was able to win the title in the second division and played in the Betrideildin since 2008 . In 2012, however, the relegation followed. After a first place in the second division and the last place in the first division, the direct promotion was achieved in 2015. After not winning a single victory, B68 has been playing second class again since 2017. There the team was the second-best A-team in the first season, but fourth place did not entitle to promotion, for this at least third place should have been taken. The same scenario happened a year later. After the away game against Víkingur Gøta II on the last match day had to be canceled after 13 minutes when the score was 0: 0 and the two direct competitors in second and third place, NSÍ Runavík II and KÍ Klaksvík II , lost their games due to the worse goal difference a simple win is enough to overtake both teams. When the game was rescheduled a day later, however, it remained 0-0, so that all three teams were tied.

The club was active several times in international football, but was always eliminated in the first round of the respective competition. In the UEFA Intertoto Cup he was able to achieve a respectable success on June 23, 2001 with a 0-0 draw against the Belgian club SC Lokeren .

The following coaches have been active for the club since 1978: 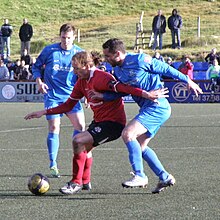 The record player in the first division is Øssur Hansen with 311 games. Súni Fríði Barbá scored the most goals in the Betrideildin with 94 (as of the end of 2019).

The women's team from B68 has played four times in the Betrideildin . The first season in the top division ended in 1997 on the penultimate place. After the relegation first leg against NSÍ Runavík was won 4-2, there was a 0-3 defeat in the second leg, which meant relegation. It was not until 2001 that B68 returned to the first division and in 2004 formed a syndicate with GÍ Gøta as GÍ Gøta / B68 Toftir , which was dissolved again after the season. From 2008, the club joined NSÍ Runavík in a syndicate as B68 Toftir / NSÍ Runavík and managed in the first season as third-placed promotion to the first division. After the 2015 season, the merger was dissolved again, and from the following year B68 entered the first division. In 2019 the merger with ÍF / Víkingur to form ÍF / Víkingur / B68 took place .

Birita Nielsen is the record player in the first division with 60 games. Maibritt Olsen scored the most goals in the Betrideildin with 28 .