The AB Argir , full name Argja Bóltfelag ( German  football club from Argir ), shortly AB is one of six football clubs of the Faroese capital Tórshavn and plays in the first Deild .

Argja Bóltfelag was founded on August 15, 1973. The founding father was the Dane Johnny Nyby together with other sports friends in Argir, the southern district of Tórshavn. Argir was already part of the contiguous settlement area of ​​Tórshavn. Seen in this way, AB was the third Tórshavn club after HB Tórshavn (1904) and B36 Tórshavn (1936). However, Argir was only incorporated in 1997, so that Fram Tórshavn (1975) can count as an older capital club.

In the spring of 1974, AB elected its first board of directors. The first president was Johnny Nyby, vice-president Fróði Olsen, treasurer Sonja á Argjaboða and secretary Kristian Arge. The assessors were: Erling Olsen, Sæmundur Mortenen and Jens Hansen.

In the same year the club took part in the regular Faroese football matches.

At first there was only a narrow school yard available as a training ground. Later there was a 20 × 40 meter square next to the school. As a result, there was no stadium of their own, but with the permission of the clubs HB Tórshavn and B36 Tórshavn and the municipality of Tórshavn , AB was able to rent the pitch in Gundadalur for training and league games. In this way, AB was able to participate in regular sports activities.

In 1983 a real football field was built in Argir, which significantly improved conditions for AB. In 1985 the clubhouse was added in the basement of the previous school building.

The Argir Stadium has had artificial turf since 1998 and therefore the same conditions as the other clubs in the Faroe Islands.

In the 2006 season Argir was the first time in the Formuladeildin (now Betrideildin ), the highest league, ascend, but increased as Penultimate again immediately. In 2008 the club reached second place in the 1st Deild and thus played again in the top division in 2009, in which this time relegation could be secured with a sixth place. A season later, AB Argir had to start again in the second division. In 2011, the promotion seemed to be already certain, when before the last matchday there was a goal difference of six goals better than the tied team from TB Tvøroyri , thanks to an 11-0 win by TB against EB / Streymur II with a 6-1 - AB's victory against FC Hoyvík , this lead was lost and the ascent was missed due to the fewer goals scored. The decisive goal for TB came from a penalty in the sixth minute of stoppage time. In 2012 he finally managed to get up in second place. In 2016, when he was ninth, he was relegated again, and when the 1st Deild came first , he was immediately promoted again.

The record player in the first division is Jónas Stenberg with 159 games. Dion Splidt scored the most goals in the Betrideildin with 17 (as of the end of 2019).

The AB women's team played in the 1st Deild continuously from 2003 to 2014 . After the first seasons were completed in the lower half of the table, AB was able to establish itself as the second force behind KÍ Klaksvík , from 2008 to 2011 the team was runner-up. 2006 and 2009 was AB in the cup final and achieved here after the defeat in 2006 against KÍ Klaksvík in 2009 against the same club the only cup victory. After the last place in 2014, a syndicate with B36 Tórshavn was entered as AB Argir / B36 Tórshavn . This was resolved after one point from 20 games. In 2017, a syndicate was formed together with B71 Sandur as AB Argir / B71 Sandur , which was dissolved after two major defeats at the beginning (0:19 and 0:24). 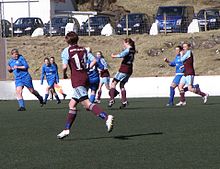