Tórshavn [ ˈtɔu̯ʂhau̯n ] ( German  Thorshaven , Old Norse Þórshǫfn ; Danish Thorshavn , Faroese for short: Havn ) is the capital of the Faroe Islands and is located on the east coast of Streymoy . It has an area of ​​158 km².

As the political, economic and intellectual center of the country, the city offers far more infrastructure than one would expect in a comparably large central European town . The city used to be called the smallest capital in the world , but that is not correct.

The city's best- known motto is Tann deiliga Havn ("The beautiful Thorshaven"), which is also a song title. 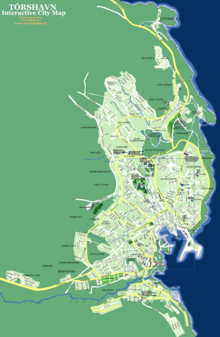 The theophore name of the city comes from the Germanic god of thunder and lightning Thor (Faroese: Tórur ) and the Scandinavian word for port , havn . Tórshavn literally means: "Thor's port". In the Faroese language, the voiceless dental fricative / þ / mostly changed to / t /. The old Norse name Þórshöfn still lives on in Icelandic today.

The city coat of arms shows the Thorshammer Mjölnir and thus announces the pre-Christian founding time of the place .

Tórshavn is geographically in the center of the archipelago on the south east coast of the largest island Streymoy at 62 ° north latitude and 6 ° 45 'west longitude. The island of Nólsoy offshore to the east provides additional protection for the city's natural harbor. It is said that Tórshavn's development into a port city would have been unthinkable without the “breakwater” Nólsoy.

On the already humid Faroe Islands, Tórshavn is particularly vulnerable to fog.

The contiguous urban settlement area of ​​the city includes the places Argir in the south and Hoyvík in the north and on December 31, 2002 had exactly 17,064 inhabitants with a population density of 116 people / km². The municipality of Tórshavn extends over various other neighboring towns with around 1,400 additional inhabitants ( see there ). 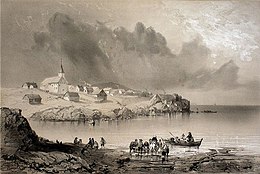 The city was first mentioned in a document in 1075 and is therefore probably the oldest capital in Northern Europe after London. The thing on the Tinganes peninsula here probably goes back to around 850. Norwegian refugees fled the tyranny of Harald I of Norway and settled here. In the year 1000, Christianity was accepted on the Thing due to the missionary work of Sigmundur Brestisson , as the Faroese saga tells.

From 1271, Norwegian rule was established with a monopoly trade over the Faroe Islands . The commercial agents subsequently settled in Tórshavn. Ships from Bergen regularly brought salt, grain and wood. The Munkastovan was built here under Bishop Erlendur .

Protestant Christianity was introduced in 1539.

In 1580, Magnus Heinason had the Skansin fortress built at the northern end of the harbor to protect against pirates. In 1673, under the crushing fork time, a major fire destroyed large parts of Tinganes. Valuable documents fell victim to the flames.

In 1709 the Danish crown took over the monopoly trade. In the same year, a smallpox epidemic hit the city, killing 250 of the 300 residents. Only with the Rybergs trade did Tórshavn develop into a city in the true sense of the word at the end of the 18th century. In 1856 the monopoly trade was lifted and Løgting moved into its current headquarters.

In 1866 the municipality of Tórshavn was formed and with it the first citizens' assembly of the place. Since then, Havn has officially been the capital of the Faroe Islands. On January 1, 1909, the city was granted the status of a Danish trading town . In 1927 the Tórshavn Havn was expanded and provided with a large quay wall. Since then, Tórshavn has had a real seaport.

During the British occupation of the Faroe Islands in World War II , Tórshavn and Skansin Fortress were the headquarters of the Royal Navy . Two sea cannons still bear witness to this today. 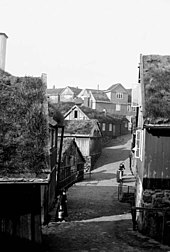 Development of the population of the city (from 1975 municipality) Tórshavn (from 1989 to December 31) :

Tórshavn is a service and administrative center. 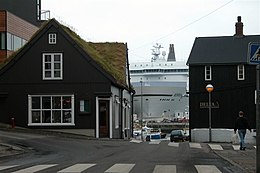 No house in Tórshavn is as big as the Norröna ferry, which lies here in its home port and connects the Faroe Islands with the rest of the world.

Tórshavn is the most important trading and ferry port in the Faroe Islands and thus an international transport hub.

It is the home port of Norröna , a modern car ferry that went to Denmark , Norway , Shetland , Scotland and Iceland immediately after it went into operation . Since the trips to Shetland and later to Scotland ( Scrabster ) as well as the detour to Bergen (Norway) turned out to be unprofitable, since January 2009 the Norröna has only served the Denmark – Faroe Islands – Iceland route. Between Denmark and the Faroe Islands, the line operates twice a week in summer and once a week to Iceland. In the winter months, the route between the port of Hirtshals in Denmark and Tórshavn is only served once a week. Cruise ships are often also moored in port for a short stay.

The regional ferry traffic to Nólsoy and Suðuroy is handled by Strandfaraskip Landsins . The traffic to Hestur and Sandoy now runs overland to Gamlarætt on the west coast, from where the passage to the sea has been considerably shortened.

The main location of the Faroese shipyard association Tórshavnar Skipasmiðja is located in the port .

Several city bus routes operate in Tórshavn, which extends over a relatively large area. Intercity buses also go from here, e.g. B. through the Vágar tunnel, which opened in 2002, to Vágar airport (travel time 1 hour). Since January 1, 2007, Tórshavner city buses have been running free of charge .

See also : List of airfields in the Faroe Islands

From the Bodanes Heliport ( ICAO code : EKTB), Atlantic Airways offers a helicopter line u. a. to Vágar Airport, Klaksvík ( ICAO code : EKKV ) and the island of Koltur . There is a helipad for rescue helicopters near Tórshavn Hospital . 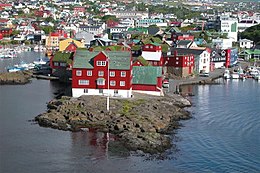 In the middle of the harbor is the Tinganes peninsula with the Løgting , one of the oldest parliaments in the world, and the Faroese state government . Annika Olsen has been the city's mayor since January 1, 2017 .

The National Archive of the Faroe Islands has existed in Tórshavn since 1932 , initially a purely administrative archive.Today it also has the largest collection of literature in the Faroese language , the almost complete genealogical data of the island's population over the past 200 years, and takes on the task of training administrative staff. The Imperial Ombudsman in the Faroe Islands is based in the city center and represents the kingdom on site.

as well as with 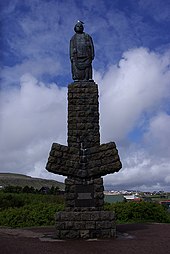 Memorial in the city park

In addition to the consulates of various countries, there are museums , theaters , libraries , the university, a pedagogical college, the central hospital, hotels , restaurants and - a park. This park is the only type of forest in the Faroe Islands.

The architectural masterpiece and cultural center of the Faroe Islands is the House of the North ( Norðurlandahúsið ) , which was inaugurated in 1983, with its characteristic sod roof and bold architecture. It is run by the Nordic Council and is one of the most popular meeting places in town. The people of Tórshavn are very proud of this building and the events that take place there, such as the concerts of the Faroese Symphony Orchestra .

Tórshavn is the seat of the University of the Faroe Islands .

→ Main article : List of personalities from the city of Tórshavn