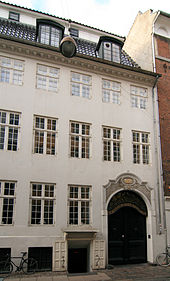 The publisher's headquarters are at 3 Klareboderne Street in Copenhagen

Gyldendal (full name: Gyldendalske Boghandel, Nordisk Forlag A / S ) is Denmark's oldest and largest publisher and publishes both modern and classic fiction . Information and teaching material, literature for children and young people, illustrated books, specialist and handbooks and electronic publications are also published . The Copenhagen-based group had over 500 employees in 2009 and had a turnover of 905.6 million Danish kroner . Of the 2,847 titles published, almost 1,700 were new editions. Today (2010) the management consists of Stig Andersen (since 1999) and Bjarne Ponikowski (since 2008).

Gyldendal was founded by Søren Gyldendal in 1770, making it the oldest existing book publisher in Denmark. The father of the founder, the school caretaker Jens Mortensen, gave his born 1742 eldest son is not the last name Jensen, as would have been usual after the fashion of, but named it after the Gyldendal ( "Golden Valley"), the valley in Jutland Giver at Løgstør , where the father's school was located. Søren Gyldendal bought the Klareboderne 3 property in Copenhagen in 1787 , which is still the headquarters of the publishing house to this day. In 1809 the company was taken over by the founder's son-in-law, Jacob Deichmann (1788–1853). In 1850 he transferred the publishing house to his colleague Frederik V. Hegel , who primarily promoted modern fiction .

In 1903 his son Jacob Hegel (1851-1918) united Gyldendal with the Det Nordiske Forlag publishing house and transformed the company into a public limited company under the new name of Gyldendalske Boghandel, Nordisk Forlag . Since then, the constellation of the publishing direction has changed. With Frederik Hegel (1880–1961), the third generation joined the board in 1912.

Since 1906 there was a branch in Norway as a separate department under the name Gyldendal Norsk Forlag in Kristiania, today's Oslo . In 1922 the department was transformed into an independent joint-stock company and in 1925 it was sold to a Norwegian company for 2.1 million kroner. Previously, the Norwegian booksellers had launched a nationwide boycott against the Danish publisher, because the Norwegians perceived the literary union with Denmark as a “national humiliation”. The boycott, which was to last for months, was initiated on February 29, 1924 by a press campaign and was directed against Danish influence.

From 1940 to 1954 Ingeborg Andersen headed the publishing house. Her successor Knud W. Jensen acquired the majority of shares from Otto B. Lindhardt, Jokum Smith (1920–80) and Ole Wivel . In 1958 the Søren Gyldendal Prize was introduced. The prize with the name of the publisher's founder is linked to a monetary bonus and is awarded by the publisher's own Søren Gyldendal Fonden to authors who excel in fiction or specialist literature through particularly creative achievements. The Gyldendal Book Club has existed since 1966 .

At the turn of the year 1998/99 the Munksgaard Group sold large parts of its company to Gyldendal, some of which were continued as full subsidiaries such as the publishers Rosinante Forlag , Høst & Søns Forlag and Hans Reitzels Forlag . In 1997, in Haslev on the island of Zealand, work began on expanding the storage and shipping facilities to around 7000 m². In connection with the subsequent relocation of the shipping department of Amager by Haslev shipment with the graphics company merged Nordisk Bogproduktion A / S under the name Nordisk Bog Center A / S . The graphics department was sold in 2001, but sales continued under the same name.

In 2001, Gyldendal bought the remaining Danish-language publishing activities of the Munksgaard Group, which will continue to operate as a subsidiary, Munksgaard Danmark A / S. After the completion of the publication of the encyclopedia Den Store Danske Encyklopædi in 2001, Danmarks Nationalleksikon A / S joined Gyldendal on February 1, 2002 , where it formed a new department called Gyldendal Leksikon . To form out of a desire, larger units in the Group, merged in 2002, the daughter publishers Forlaget Forum , Samlerens Forlag , Forlaget Fremad , Høst & Søns Forlag and Rocinante Forlag and formed the publishing group UK Forlagene A / S . Five years later, in 2007, its name was Rocinante & Co A / S changed. The subsidiary Tiderne Skifter was sold to the publisher Claus Clausen in the same year.

Gyldendal acquired substantial shares in Gad Forlag and Forlaget Systime in 2004 and Cicero / Chr. Erichsens Forlag , which will be continued as an independent subsidiary. In 2007 Gyldendal acquired the book retailing company Atheneum International Boghandel , primarily to establish an internet book trade. They also bought 60 percent of the shares in the media group KREA , which specializes in computer-aided educational and entertainment games for children and young people. In the same year, Gyldendal set up a new legal publisher, Nyt Juridisk Forlag, in collaboration with the Danish Lawyers and Economists Association ( Danmarks Jurist- og Økonomforbund , DJØF for short) .

At the beginning of 2013, Gyldendal announced its intention to close its internet bookstore g.dk due to the great competition and instead bought shares in the Danish subsidiary of the Swedish streaming service Storytel in order to offer audio books there. The specialist bookshop for textbooks, eLounge.dk , will also be closed in autumn. The book sale will then take place on gyldendal.dk. eLounge.dk has been owned by Gyldendal since July 2010.

The following subsidiaries belong to Gyldendal (the percentage in brackets):