Amager [ ˈɑmɑːˀ ] (German historically Amak ) is a 96.29 km² Danish island in the Öresund . A part of the city of Copenhagen extends over its northern part with the districts Christianshavn , Vestamager and Sundbyøster and Sundbyvester (together Sundbyerne ). The middle portion forms the tårnby municipality with the Kastrup Airport in Kastrup and the southern the dragør municipality with the port city of Dragør . The dividing channel to the center of Copenhagen is the Inderhavnen , over which the road bridges Knippelsbro and Langebro lead. Other bridges that connect the island with Zealand are the Sjællandsbroen and the Kalvebodbroen and the Sorterendebroen further south. The Bryggebroen bicycle and pedestrian bridge has been in place since 2006 , connecting Islands Brygge with Vesterbro at the Fisketorvet shopping center . The Øresund Crossing connects Amager with the city of Malmö in Sweden. 209,462 people live on Amager (January 1, 2020). Amager is by far the most densely populated island in Denmark.

Amager in the satellite image

The first part of the name probably comes from ame , a name for a strait between the mainland and the island. The second part of the name comes from the old Danish haki (hage), see hook . The southern tip is called Aflandshage ("Amagerlands-Haken").

Amager is an interjection in Danish colloquial language that expresses a kind of oath: “Can you swear that it wasn't you?” - “Amager!” (Really! Seriously!) - combined with the gesture of an outstretched hand covering the larynx grazes. This is due to the fact that there used to be an execution site on Amager, where those sentenced to death were beheaded.

Today Amager is colloquially as well as in the Copenhagen dialect, especially among its own inhabitants, pronounced as Ama'r . 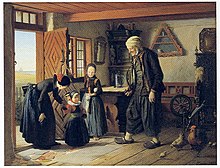 In 1521, for the sake of his wife Isabella , the Danish King Christian II settled Dutch colonists on Amager, who supplied various types of vegetables for the queen's table. Other sources speak of the year 1516. At the beginning of the 19th century they are said to have maintained their own language. The island was enlarged significantly in the Second World War by major containment work in the west of the island. The land obtained in this way ( Amagerfælled ) was initially used for military purposes, but today it is mainly a nature reserve and recreational area for the Copenhageners.

Since around 2000, a new district has been created with Ørestad . The new Copenhagen Concert Hall (DR Koncerthuset), built according to plans by the French architect Jean Nouvel , opened in the DR Byen building complex , the headquarters of the Danish broadcasting company. The Öresund connection has also been running from Amager to Malmö in Sweden since 2000 . The island is therefore of central importance for international traffic.

Larger parts of what was originally an industrial and commercial use have now given way to residential areas. As of 2007, Amager was upgraded as a recreational area and residential area through the completion of the metro lines to Vestamager and the airport as well as the artificial embankments of the Amager Strandpark off the island on Øresund . On March 22, 2013, a modern new aquarium, Den Blå Planet , was opened south of the beach park , the largest in Northern Europe.