The title of this article is ambiguous. Further meanings are listed under Malmö (disambiguation) . 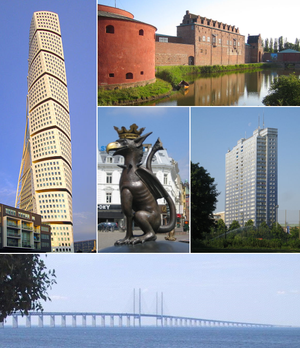 Malmö is the third largest city in the country after Stockholm and Gothenburg .

Malmö is on the Baltic Sea Cycle Route EuroVelo 10. The city has its own beach.

City districts of the municipality of Malmö

The administrative structure of the Malmö municipality was reformed on July 1, 2013. The ten districts since 1996 have now been merged to form five districts. The city districts, in turn, are divided into a total of 134 sub-areas.

The climate of Malmö is cool-temperate with moderately warm summers and, due to its location on the Öresund, comparatively mild winters. In July and August the daytime temperatures averaged 22 degrees, at night around 14 degrees. The average temperatures in winter are just above freezing point, the precipitation mostly falls as rain, whereby there can also be strong onset of winter , which, however, rarely last long. Precipitation is relatively evenly distributed over the year, with the spring months being slightly drier (an average of 3.8 cm in April) and the most precipitation (over 6 cm) in July and December.

The population was around 313,000 in 2013, of whom 215,674 (69%) were born in Sweden, 42% (including 11% whose parents come from abroad) have a migration background . The number of people with a migrant background in the city is increasing annually by around 3,500, or one percentage point of the city's population. In the Rosengård district , 85% of the residents have a migration background. 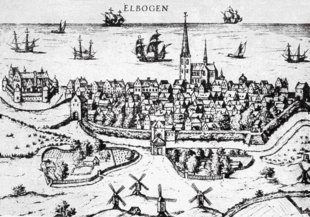 Illustration of Malmös near Braun and Hogenberg (Cologne 1588)

The city's name probably comes from the old Danish Malmhaugar . It was mentioned as a landing place under the name Malmhaug since 1116 , later as Malmoge, Malmöyghe or Malmey ( Latin Malmogia ). The old Swedish name Malmöughe , used around 1367, is derived from the roots Malm and Högar , the indefinite plural of “pile”, and thus means “pile of sand”. 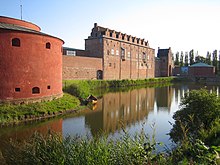 During the Hanseatic era , the city was best known in the German-speaking area under the Low German name Elbogen . This name is also found on a copper engraving of the four Skåne cities " Helsheborch ", " Lunden ", "Elbogen" and " Landeskron " in a description of the cities of the world circuit of Georg Braun and Frans Hogenberg ( Civitates Orbis Terrarum , Cologne 1588). In the Latin work, Malmö is also referred to as Ancona Scanorum (" Skåne Ancona "). The Italian port city of Ancona was originally founded in Greece, and the Greek name Ἀγκών ( Ankṓn "elbow") referred - as well as the Low German name Malmös - to the elbow-like shape of the promontory that protected the port.

In fact, even in the case of Malmö, the course of the coastline resembles the shape of an elbow to this day, with its tip located south of the city of Limhamn, which was incorporated in 1915. This elbow tip, together with the opposite island of Amager, forms the narrowest point at the southern end of the Øresund. That is why the bridgehead of the Öresund Bridge , which now connects Denmark with Sweden, is at this point. 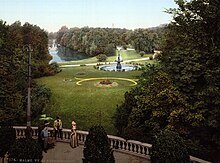 The landing site was primarily used by the Danish king to get to the more important Lund . It soon stood out for the herring fishing and trade carried out by German merchants along the Skåne coast, and also benefited from its strategic location. Since the Danish king had control of the ports in the north and south, he could have the southern Öresund cordoned off.

In 1319 the foundation stone for the St. Petri och Pauli Kyrka was laid and the first town hall was built around the same time. The oldest city privileges date from December 20, 1353 and were later confirmed and expanded several times. Malmö now increasingly assumed the role of Lund as the most important city in Skåne. The oldest buildings in the city that still exist today date from this time, B. also the fortress Malmöhus , which was founded in the 15th century by Erich von Pommern . Since then, Malmö has also had the Pomeranian griffin in its coat of arms.

Between 1318 and 1658 the Danish city was occupied several times by Swedes and once incorporated for a short time. Malmö is considered the birthplace of the Danish Reformation . Denmark's first Lutheran sermon was given in Malmö and the first Bible was printed in Danish .

In the 16th and 17th centuries, Malmö was besieged alternately by Sweden and Denmark . On April 23, 1512 was here Peace of Malmo between Denmark and the Hanse and a ceasefire Denmark with Gustav Vasa closed from Sweden. During the Hanseatic League, the city was under German influence. Malmö became Swedish in 1658 through the Peace of Roskilde under Charles X Gustav . In 1775 the city received an artificially created harbor .

On August 26, 1848, an armistice between Denmark and Prussia was signed in Malmö for seven months. Malmö benefited greatly from the industrial revolution .

The completion of the Öresund Bridge in 2000 gave new impetus to the city's economic situation as a traffic junction between Scandinavia and the rest of Europe . 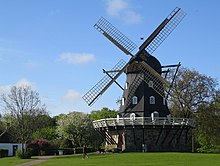 In 2001 the ecological building exhibition Bo01 was held in Malmö in the area of ​​the Westhafen, a former industrial area (including the Kockums shipyard). This is where the new construction of the Västra Hamnen district began, based on sustainability criteria.

There are many castles in the area around Malmö, including Svaneholm and Torup .

The Malmö synagogue has existed since 1903 .

Historically, shipbuilding and its suppliers were Malmö's economic mainstay, especially the Kockum shipyard . Until its dismantling in 2002 was Kockums Crane , the crane Kockums shipyard, a symbol of the city. As a result of the shipyard crisis of the 1970s, which lasted into the 1990s, the unemployment rate rose sharply. In 1995 Malmö had the highest unemployment rate in Sweden.

The economic revitalization of the city is not least due to the construction of the Öresund Bridge (completed in 2000), which has significantly improved the opportunities to work as a resident of Malmö in Copenhagen. The local economy also benefited from the improved transport infrastructure thanks to the bridge. However, the unemployment rate in Malmö is still higher than in Stockholm or Gothenburg. The construction company Skanska is the largest employer in the city. But Malmö is also known as a shopping city.

To the south of Malmö is the Öresund Bridge , a combined rail and road bridge over the Öresund . Malmö is the most important traffic center in southern Sweden, with a large train station from which trains depart to Stockholm , via Gothenburg to Norway , to Copenhagen , to Hamburg (via the Vogelfluglinie ), to Berlin (via the royal line ) and the surrounding area. Malmö Airport is located around 20 km east of Malmö , but it is dominated by the nearby Copenhagen Airport . Malmö is an important seaport with permanent connections to Lübeck - Travemünde and Rostock . Until shortly after the opening of the Öresund Bridge in 2000, this was the main ferry connection between Limhamn (part of Malmö) and Dragør on the other side of the Öresund.

Urban public transport is handled by buses after tram traffic was discontinued in 1973. A museum tram runs from the Museum of Technology to Malmöhus Park.

In Malmö, the infrastructure for bicycle traffic is well developed, even by Swedish standards. According to the city council, Malmö was rated as the most cyclist-friendly city in Sweden in a cyclist survey.

The Malmö University of Applied Sciences (Swedish Malmö Högskola ) was founded in 1998. With more than 24,000 students enrolled and around 1,800 employees, it is the ninth largest university in Sweden.

The Faculty of Art, which is part of the University of Lund , has an art, music and theater academy in Malmö, as are some institutions of the Medical Faculty.

The World Maritime University (WMU) (German: Weltschifffahrts-Universität) has its headquarters in Malmö. It was founded in 1983 by the International Maritime Organization , a specialized agency of the United Nations (UN).

An asteroid was named after the city of Malmö .

→ Main article : List of personalities from the city of Malmö

Places in the municipality of Malmö

Places in the municipality of Burlöv