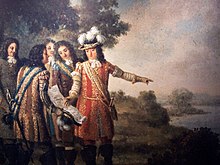 Founding of the city of Karlskrona

Fredrikskirche in the center of Karlskrona

Karlskrona was founded in 1679 as a naval base by King Karl XI. or Admiral Hans Wachtmeister was founded. Just one year later, Karlskrona was promoted to town. In 1790, much of the city burned down.

Karlskrona was originally built on more than 30 islands and islets, which still affects the cityscape today.

There are ferry connections from neighboring Karlshamn to Liepāja in Latvia and Gdynia in Poland .

The naval port of Karlskrona with its former shipyards and defenses and selected city buildings have been declared a World Heritage Site by UNESCO .

The houses built when the city was founded in the 17th and early 18th centuries are still standing today. The Fredrikskyrkan goes back to the architect Nicodemus Tessin the Younger . The foundation stone of the church was laid in 1720, the inauguration in 1744. As the architect was influenced by European architectural styles of his time, the style in yellow and the decorations of the church deviate from the usual style of Swedish churches.

The Trefaldighetskyrkan , also built by Nicodemus Tessin the Younger , the town hall and the Vattenborgen water reservoir in the style of a castle are also located on the central square ( Stortorget ).

The Admiralty Church, built in 1697, is the largest wooden church in Sweden.

World Heritage Sites that are not on the main island

A bridge leads to the eastern island of Stumholmen. There were several handicraft factories on the island to supply the naval base. There is also a no longer operating prison on Stumholmen, the naval museum and the Kungshall bastion, from which salutes are shot on festive occasions.

To the northwest of the main island lies the Skärva manor with a castle-like main building and several annexes that the owner and shipbuilder Fredrik Henrik af Chapman had built.

The naval base is one of the largest employers. By Marine Karlskrona has from inception and shipyards for naval construction , the Company today Kockums belong. Another focus is software development and electronics construction.

The local club Flottans IF Karlskrona was the Swedish handball champion in 1932. The ice hockey club Karlskrona HK plays in the second highest division, HockeyAllsvenskan . The local football club is called Karlskrona AIF .

The city is described in the ninth chapter of the novel The Wonderful Journey of Little Nils Holgersson with the Wild Geese by Selma Lagerlöf .

There are five twin cities :

Places in the municipality of Karlskrona