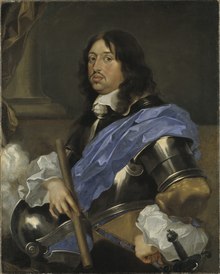 Karl Gustav von Pfalz-Zweibrücken , Count Palatinate near the Rhine , Duke in Bavaria and Jülich, Kleve and Berg , Count zu Veldenz , Sponheim , Mark and Ravensberg as well as Herr zu Ravenstein - as Count Palatine Karl Gustav for short - (born November 8, 1622 in Nyköping ; † February 13, 1660 in Gothenburg ) was after the abdication of his cousin Christina from 1654 to 1660 as Karl X. Gustav King of Sweden and Duke of Bremen-Verden .

In the Thirty Years War (1618-1648) he achieved military successes for the Protestants in northern Germany . He also remained victorious in the conflict with Denmark-Norway and Poland-Lithuania .

Coat of arms as the King of Sweden

Karl Gustav was the second (and oldest surviving) son of Johann Kasimir von Pfalz-Zweibrücken-Kleeburg and his wife Katharina Wasa , daughter of King Karl IX. of Sweden and half-sister Gustav II Adolf . His younger brother was Adolf Johann , who was the Swedish Imperial Marshal from 1653 to 1654 and Governor General of Prussia from 1657 to 1659 . His sister Marie Euphrosine was married to the future Swedish Chancellor Magnus Gabriel De la Gardie since 1647 .

Karl Gustav was eleven years old when his uncle Gustav Adolf died in the Battle of Lützen in 1631 and the crown passed to his almost five-year-old daughter Christina , who then grew up in the house of his parents with him and his siblings, while Chancellor Axel Oxenstierna the Swedish Politics headed. Karl Gustav's father was his rival and gathered the adversaries around him.

The young prince was trained at the Danish Military Academy Sorö and became an outstanding soldier who fought as a Swedish general in the Thirty Years War in Germany and was appointed generalissimo of the Swedish troops in Germany in 1647 . As such, he stayed in Nuremberg, among other places, where he gave a large feast in 1649 to mark the end of the war. When his cousin, Queen Christina , signaled her intention to marry him, she achieved his appointment by the Diet in 1649 as heir to the throne and Hereditary Prince of Sweden. In 1650, however, Christina categorically declared that she would never marry (probably also because Karl Gustav had been born illegitimate in March 1649) and abdicated on June 16, 1654. On the following day, Karl became her successor. After the Thirty Years' War he tried first to reorganize the state finances.

On October 24, 1654 he married Hedwig Eleonora von Schleswig-Holstein-Gottorf , who gave birth to his son Karl on December 4, 1655 .

Charles X of Sweden, after Ehrenstahl

King John II Casimir of Poland was the son of Sigismund III. the Swedish royal house Wasa and made claims to the throne. The non-recognition of Karl Gustav by Poland led to the conflict in 1655, which escalated into the Second Northern War . Swedish troops invaded the Kingdom of Poland from Pomerania and Lithuania , the Swedes gained the upper hand without major resistance, John II Casimir fled the enemy to Silesia . In addition, through an alliance with Russia , the Swedes succeeded in weakening Poland-Lithuania, which was sinking into chaos and Cossack uprisings, both militarily and economically. Elector Friedrich Wilhelm von Brandenburg was involved in the dispute as a liege-bearer of the Polish crown over the Duchy of Prussia in the war.

Johann Philipp Lemke : Karl X. Gustav in action with Polish Tatars during the Battle of Warsaw, July 29, 1656 (1684; Museum of the Polish Army , Warsaw)

After Charles X had gained military control over the Duchy of Prussia, Friedrich Wilhelm, who was also the Duke of Prussia, submitted to the suzerainty of Sweden. The Königsberg Treaty (January 17, 1656) regulated the abolition of the connection with the Polish estates, the right of transit for Swedish troops and the opening of the ports for Swedish warships. The return of John II Kasimir led to another war. After the Swedish army had shrunk in the winter campaign, Karl X. Gustav turned to Friedrich Wilhelm for help. In the Treaty of Marienburg (June 23, 1656) an alliance came about, in which the Brandenburg Elector was given the prince-bishopric of Warmia as a fief. The Polish-Lithuanian troops were badly beaten in the Battle of Warsaw (July 28-30). After the victory, Karl Gustav retreated in the direction of Danzig in front of a newly formed Polish force , while the Brandenburgers secured the eastern border of Prussia against invaded Lithuanian horsemen. In the Treaty of Labiau (November 20, 1656) Sweden recognized Friedrich Wilhelm as an absolute and sovereign prince in Prussia. The unresolved conflict with Sweden forced the Poles to recognize Brandenburg's sovereignty over the Duchy of Prussia. A new alliance between Poland and Brandenburg against Sweden was concluded in the Treaty of Wehlau (September 19, 1657).

In the war against Denmark in 1657, Sweden conquered large parts of the neighboring state. Karl Gustav's attack across the ice of the Little and Great Belts is considered one of the most daring acts in military history. Sweden reached its greatest territorial extent after the Peace of Roskilde under his rule.

Although the Polish Army from 1658 finally throw back the Swedes and sell with great difficulty could, succeeded Charles XI., As Charles X Gustav had died before signing the agreement, the Treaty of Oliva (1660) the possession of Livonia with Riga final for Sweden to to back up.

On February 13, 1660, King Charles X Gustav died during the Estates Day in Gothenburg.

Through the liaison with Brigitta Allerts, he was the father of the illegitimate son Gustav Carlsson , Count von Börring ( Greve av Börringe ), Lord of Lindholm (born March 13, 1649 in Stockholm, † January 11, 1708 in Schloss ter Horn), who 1685 to Ameland with Isabella Susanna von Schwarzenberg (1640–1723), the daughter of Georg Friedrichs von Schwarzenberg (1607–1670) and the Gaets Tjarda van Starkenborgh, married.

Karl X. Gustav was a member of the Fruit Bringing Society with the company name The Sublime .