The Reichsmarschall (also Erzmarschall ) was originally the military deputy to the emperor and held one of the Erzämter in the Holy Roman Empire . In the 17th and 18th centuries the title of Reich Field Marshal was bestowed by the Kaiser and the Reichstag .

In 1938 he was reintroduced in Fascist Italy and in 1940 in the German Reich during National Socialism for both a military and a political commander-in-chief.

Reichsmarschall corresponds roughly to the title of generalissimo . Today the rank of Reichsmarschall is only used in Sweden for the head of the royal court . 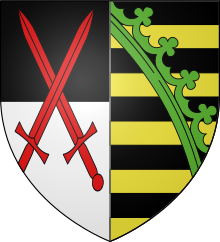 The office of marshal had been one of the ore offices since Otto I. and later connected with the electoral dignity. In the Golden Bull , the Elector of Saxony is named as Reich Archmarschall (Archimarescallus). He was the bearer of the imperial sword on ceremonial occasions . His official sign were two crossed red swords, which he carried in the coat of arms (see Reichsrennfahne ). The deputy was hereditary as Reichshermarschall (Vicemarescallus) to the Counts of Pappenheim . In the High Middle Ages, both offices had a real function as commanders of the entire imperial contingent , but since the Renaissance at the latest they only had to perform ceremonial tasks at imperial coronations and imperial days .

When Generalissimo was in the Thirty Years' War Albrecht von Wallenstein called top general of the emperor. In the electoral capitulations of the emperors of the 17th century, the Reichsheer , a contingent army of the empire in addition to the armies of the principalities with some field marshals of their own , was to be commanded by an Reich General Field Marshal . The decision as to who should be entitled to this appointment rests with the emperor and the Reichstag. Two Reich Field Marshals were always appointed, one each from the Catholic and one from the Protestant camp. In 1734 four Reich Field Marshals were appointed for a limited period.

In Denmark , the Reichsmarschall (Danish: Rigsmarsk ) was the second most important Reich office in the Danish Reichsrat after the Reich Chancellor until 1660 . Frederik III. replaced the existing elected monarchy in 1660/61 in favor of a hereditary monarchy and abolished the office of Rigsmarsk. The last holder of the office was Joachim von Gersdorff.

In Sweden , the meaning of the Reichsmarschalles (Riksmarsk and Riksmarskalk) has changed over time. Originally head of the Swedish cavalry , like the marshals of other countries, the Riksmarsk developed into the military commander in chief from the middle of the 13th century . Important Reichsmarschalls were among others Torgils Knutsson and Karl Knutsson .

After the victory over Ethiopia , Benito Mussolini, as Commander-in-Chief of the Italian Armed Forces and Capo del governo , introduced himself to the title of First Reich Marshal (Primo maresciallo dell'Impero) on March 30, 1938 , which he was forced to give to King Victor Emanuel III. as head of state had to apply. The rank above the Marshals of Italy (Maresciallo d'Italia) introduced in 1924 was abolished with these in 1946.

On July 19, 1940, the rank of "Reichsmarschall des Großdeutschen Reich " was created in the Wehrmacht , above Field Marshal General . It served exclusively to highlight Hermann Göring's leading position as the highest-ranking German soldier (and second man in the state). Goering was the only one to receive the title.

In Goering's case, the rank of Reichsmarschall was only of a formal nature. A command authority over the armed forces as a whole was not connected with it. (See also: Nazi ranks , Wehrmacht High Command )

The shoulder pieces of the uniform differed from those of the General Field Marshals with crossed marshal's baton through an imperial eagle holding a wreath with the marshal's baton in its claws.

In addition, Goering received an interim staff , the tip of which was made of ivory.

The Reichsmarschall has been the connétable of France since the 11th century . The comes stabuli (stable companion) is the Middle Latin equivalent of the German marahscalc (marshal - groom ). From the 14th century he was the commander-in-chief of the army (supreme crown general ), to whom the marshals of France served as deputies from 1190 . In the following years it was one of the most powerful functions in France. The office of connectable was finally abolished by Richelieu in 1624/1627 because the abundance of power could not be combined with the ideology of absolutism. His powers were temporarily transferred to the office of General Marshal (maréchal général des camps et armées du roi), which was newly created in the late 16th century .

The marshals of France or grand marshals of his palace appointed by Napoleon as marshals of the Empire (Maréchaux d'Empire) are also incorrectly referred to as imperial marshals .

The Dai-Gensui , who was first appointed in 1871, corresponds to the Reichsmarschall.

For the bicentenary, the General of the Armies of the United States (6 stars) was created as the highest rank on October 11, 1976 , above the General of the Army (5 stars) comparable to a field marshal . Only George Washington was posthumously awarded this dignity "for the past and present". It was determined that no US officer can ever hold a higher rank than Washington.

General John J. Pershing took the title after World War I in recognition of his performance as Commander in Chief of the American Expeditionary Forces in Europe. As a badge of rank he wore four stars, but in gold instead of the usual silver. However, at that time the rank was more like that of the field marshal, as the 5-star general did not yet exist.

So far, no other personality has been awarded this rank.