The United States Military Academy ( USMA ) is a military academy of the United States in West Point , New York , and a means of parent US Army Training and Doctrine Command (TRADOC) . It trains around 25% of the next generation of officers in the US Army .

The USMA is housed in a former US Army fort on the west bank of the Hudson River in Orange County at West Point, about 80 kilometers north of New York City . The academy complex takes up 65 km².

USMA is one of the most prestigious universities in the United States. Graduates of the academy receive the academic degree of a Bachelor and are at the same time Second Lieutenant of the Army. After graduation, they have at least five years of service followed by three years in reserve. The outstanding importance of the academy can be seen in the synonymous use of the place name "West Point" with the institution.

West Point is the longest continuously used location by the US Army. The motto of the academy is "Duty, Honor, Country" ("Duty, Honor, Fatherland"). 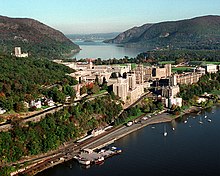 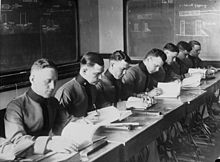 George Washington already selected the location for the fort; the structure was built in 1778 by Tadeusz Kościuszko . In 1781 the fortress commander, Benedict Arnold , planned to surrender the fort and its crew to the British troops under General Henry Clinton without a fight for £ 20,000 sterling. When this conspiracy was exposed through the capture of the British middleman Major John André , he fled to the British and fought against the Americans from there. André was later hanged for espionage . Washington saw West Point as one of the most important military positions on the continent. Located on a plateau over a bend in the Hudson River, the Continental Army was able to control the important shipping traffic from there. Had the British army captured this position, they could have cut off the northern and southern colonies. Cannons from this period can still be found on the fortress walls today.

On March 16, 1802, the fort was converted into a military academy by a law by Thomas Jefferson due to a blatant shortage of officers in the US Army. Colonel Sylvanus Thayer , who headed it between 1817 and 1833, played an important role in the history of the academy . He increased the quality of the training and placed the emphasis on military discipline and conduct of honor. In the field of education, he made civil engineering the cornerstone of his studies; the graduates of the academy played a significant role in the development of the infrastructure in the United States in the first half of the 19th century. When more technical universities were established after the Civil War , the military academy expanded its curriculum beyond engineering.

Many of the officers who took part in the Civil War had previously been trained at West Point. In part, friends and former classmates from West Point fought each other in this conflict.

After the First World War, the director Douglas MacArthur expanded the curriculum even further, especially with physical and athletic subjects. The idea of ​​“every cadet is an athlete” thus became an important goal. The previously unwritten system of honor was also codified. The Cadet's code of honor is: "A cadet does not lie, cheat or steal, and does not tolerate the same from others". Lyndon B. Johnson expanded the academy's size from 2,529 to 4,417 cadets in 1964.

In December 1960, the military academy received the status of a National Historic Landmark . In October 1966, it was entered as a Historic District on the National Register of Historic Places .

The academy has also been accepting women since 1976 .

The USMA and the Helmut Schmidt University / University of the Federal Armed Forces Hamburg have been running an annual exchange of cadets and officers since 2005.

Throwing the service cap is the symbolic high point at the end of the closing ceremony after the swearing-in ceremony.

West Point places high demands on people to be admitted. The largest pre-selection is the personal recommendation by a member of the US Congress or US President , which an applicant must present. In addition, a good grade point average of the high school degree and a flawless certificate of good conduct are required. The applicant must not be married and not enter into marriage during the training. Every year around 11,000 people apply, of which almost 1,300 are admitted to the new year.

Every year on June 25th, the new cadets come to the academy. Loudspeakers have been set up around their premises to give instructions to the newcomers. Before they can settle in, they are received and medically examined, similar to the basic training . Before they are allowed to bear the title of cadet ( plebe ), the applicants are given an hour to think about after the above-mentioned examination in order to sign a contract confirming their admission to the academy for a total of nine years (this obligation does not apply to those cadets who decide to leave the academy after two years at the latest).

All cadets have to take the core subjects offered from social and natural sciences as well as foreign languages ​​and engineering sciences and also complete basic training that is more demanding than the usual in the US armed forces . In addition, there are no semester breaks in the usual sense: In the time between the academic semesters, the cadets are sent to training centers all over the USA , depending on the type of service the individual recruits are aiming for. The studies lead to a bachelor's degree, which meets the requirements of a university, because the trainers also meet the usual criteria for university lecturers. In addition, all students must meet a high standard of fitness and attend compulsory sports courses. Fitness is checked with its own test. The Bachelor's degree cannot be acquired without the successfully passed test. Towards the end of the academy process, the cadets are bid farewell in several ceremonies.

Around half of the graduates work in active service (at least 5 years) in the economy after their commitment period.

There is a military cemetery on site where graduates are buried unless veterans exercise their right to be buried in Arlington National Cemetery .

The USMA is run by a superintendent with the rank of lieutenant general . The 60th superintendent has been Lieutenant General Darryl A. Williams since July 2, 2018 . He is a graduate of the academy himself (1983).

The Army Black Knights represent the Military Academy in various sports of the NCAA Division I Patriot League . The football team, however, competes in the Football Bowl subdivision .

Additional graduates can be found under the United States Military Academy Graduates category .