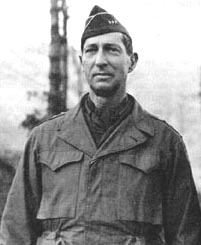 Mark Wayne Clark (born May 1, 1896 in Madison Barracks , New York , † April 17, 1984 in Charleston , South Carolina ) was an American general during the Second World War and the Korean War .

Clark was a descendant of the revolutionary leader George Rogers Clark . He spent much of his youth in Chicago , Illinois . Clark attended the Military Academy at West Point , where he gained early access at the age of 17, but lost time in college due to illness. In 1917 he completed his studies and entered the US Army .

As a captain in the infantry , Clark served with the American Expeditionary Forces in France during World War I , where he was wounded. In December 1929, Mark Wayne Clark became a member of the Freemasonry Union , his lodge Mystic Tie Lodge No. 398 is based in Indianapolis .

In the interwar period he held various functions and held various positions in the Ministry of Defense ; he was also deputy chief of personnel for the Civilian Conservation Corps (an American job creation scheme ). He graduated from General Staff School in 1935 and attended Army War College in 1937 .

In the fall of 1942, as major general, he was deputy in command of Operation Torch , the Allied invasion of North Africa. He landed on the British submarine HMS Seraph weeks before the invasion to negotiate with representatives of the Vichy regime in North Africa . In April and July 1943 Luis Orgaz Yoldi , the Alto Comisario de España en Marruecos , took part in maneuver observations of the 5th US Army at an official invitation from Clark . In 1943, Clark was promoted to lieutenant general as the youngest US officer to date .

In 1943, shortly before the Allied troops landed near Salerno ( Operation Avalanche ), he was given command of the 5th US Army . Parts of his army occupied the Italian capital Rome on June 5, 1944 without a fight.

On December 16, 1944, Clark took command of the 15th British / American Army Group from Harold Alexander , which made him commander in chief of all ground troops in Italy until the end of the war. His conduct of operations remains controversial, such as the attack on Monte Cassino , the poor progress in the occupation of Italy and the unsuccessful containment and capture of German troops.

After the war he was US High Commissioner for Austria from 1945 to 1947 and was promoted to general in 1946 as the youngest officer in the US Army to date . After his return to the USA he was given command of the 6th US Army .

On May 12, 1952, Clark took over command of the UN troops in the Korean War from General Matthew Ridgway and signed the armistice agreement with North Korea on July 27, 1953 .

From 1952 he delegated US military aid to France during the Indochina War .

After retiring from active service, Clark served as President of The Citadel Military College in Charleston, South Carolina from 1954 to 1966 , and President of the American Battle Monuments Commission from 1969 to 1984 .

Announcement from the parish of St. Marienkirchen near Schärding about the award of honorary citizenship to Clark

He wrote two volumes of memoirs: