AEF soldiers after their victory in the Battle of St. Mihiel 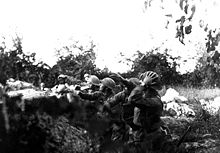 AEF soldier with gas mask and horse on the Western Front, 1918

The American Expeditionary Forces ( AEF , German  American Expeditionary Force ) was an expeditionary corps of the United States of America , consisting of soldiers from the US Army and the US Marine Corps , that was defeated in the First World War as a result of the United States' declaration of war on the German Empire on April 6, 1917 Sent to Europe to support Entente forces on the Western Front . The AEF, which in the final stage comprised more than one million soldiers, were also deployed to a lesser extent on the Italian front. Her largest operations were the defense against the German spring offensive , the battle of St. Mihiel and the independently conducted Meuse-Argonne offensive towards the end of the war. Commander in chief was John J. Pershing .

The US President Woodrow Wilson planned after the declaration of war to the German Empire actually the General Frederick Funston to hand over the command of the quickly assembled expeditionary force, but he after Funstons sudden death May 1917 John J. Pershing transferred. Pershing became Commander-in-Chief of all United States operations in Europe during World War I. The staff of the Expeditionary Forces reached Liverpool on June 8, 1917, and on June 13, Pershing entered Paris with his staff. Almost two weeks later, on June 26th, the first combat troops of the 1st Infantry Division landed in Saint-Nazaire . Pershing thought it was very important to properly train his soldiers before they were sent into battle, which is why there were no operations with American troops on the Western Front in 1917. He also considered the Entente's plan to deploy its troops under foreign orders to the front of the French and British armies as unacceptable. This initially caused great tension between the US military and their European allies.

At the end of June 1917, the first 14,000 US soldiers had reached France , the number of which rose to over a million by May 1918, about half of whom were at the front. The troops and military equipment were shipped from ports in New York , New Jersey and Newport News in Virginia , mostly using ships very similar to German freighters, to irritate the German Navy submarines . Confiscated German ocean liners such as the Leviathan (ex- fatherland ) played a large part in the transport of troops across the Atlantic . The great extent of the mobilization confronted the USA with new, primarily logistical problems. Through the USA alone, 100,000 miles of telephone and telegraph cables were laid in France and 82 new landing stages were built. The French ports of Bordeaux , La Pallice , Saint-Nazaire and Brest became important railroad junctions to quickly move US troops to the front.

The first American troops arrived on French soil in June 1917. However, the 1st US Infantry Division only moved into the trenches near Nancy at the end of October 1917 . Pershing wanted his troops to operate as independently as possible from those of the British and French, which initially failed because the AEF troops landed in France in 1917 without artillery and machine guns . In the beginning, some of the US soldiers had to be equipped with French weapons and artillery. The AEF suffered its first fatalities on November 2, 1917, when three soldiers of the 1st Infantry Division were killed in a German raid at night near Bathelémont .

After the 1st US Infantry Division, three more divisions landed in France by March 1918. By July 1918 there were about one million AEF soldiers in France. The AEF achieved their first victory on May 28, 1918 in the Battle of Cantigny. Other successful missions by the AEF took place during the Battle of Belleau Forest and the Second Battle of the Marne . On August 10, the 1st US Army was set up under the leadership of Pershing, which carried out its first independent offensive, the Battle of St. Mihiel , from September 12 to 15, 1918 . With 500,000 soldiers deployed, this was the largest operation of the US armed forces to date. The largest and most decisive battle that the American Expeditionary Forces ever fought, however, was the Meuse-Argonne Offensive . During this offensive, which lasted from September 26 to November 11, 1918, the German troops under Georg von der Marwitz were defeated in the Verdun area , which contributed significantly to the Armistice of Compiègne . In addition, a regiment from the 83rd Infantry Division was deployed in the Battle of Vittorio Veneto on the Italian front . After the end of the fighting and the November 11th armistice, most of the AEF was disbanded and shipped back to the US. Units of the 3rd US Army took part in the Allied occupation of the Rhineland in the Koblenz area until early 1923 . Further US troops were deployed in the Arkhangelsk region in northern Russia and in the Russian Far East alongside the White Armies in the Russian Civil War in 1918/20 - along with other Western Allied contingents and Japanese troops .

The use of African American soldiers caused the US Army some embarrassment in a time of racial segregation and diverse prejudices, even if there should be no official discrimination. For the war in Europe, the Afro-Americans were grouped together in the 92nd Division, in which most of the members were black. Contingents arriving later in France were placed under the French command of the US Army. Due to a somewhat different republican tradition and centuries of colonial experience, racially motivated fear of contact played a much smaller role in France . Therefore, the Afro-American soldiers formed the infantry of the French 157th Division with four regiments. Most of the relatives there, from soldiers to officers, were black. Regarded by the French as useful reinforcement, Goybet's 157th Division was thrown to the front. The units quickly became known for their fearless courage, which their commanding general, Mariano Goybet, praised.

By the end of the war, over 350,000 African-American soldiers served in the AEF, most of them in hospital units and other rear services. Only a fifth of all Afro-American soldiers in the AEF were actively involved, compared with two-thirds of the white Americans.

At the beginning and in the planning of the American Expeditionary Forces, the plan was to first equip the army with British weapons and then import the American models. Although the standard rifle of the US Army was the Springfield M1903 , the US soldiers in Europe mainly used the M1917 or P17. The US Army also used the M1897 bolt-action rifle (better known as the "trench gun"), which was less deadly and accurate due to its high dispersion, but caused severe wounds, especially in close combat. The German Army Command protested against the use of this weapon and on September 14, 1918 threatened the US military in a diplomatic note with shooting any captured soldier who was in possession of this weapon or its ammunition, as they believed they were against the Hague Land war regulations violated. However, there were no actual executions as a result. Machine guns were only rarely used by the AEF, which was mainly due to their size and difficult handling. Nevertheless, in some cases, entire regiments of the US armed forces were equipped with the Lewis Gun imported from Great Britain and used by the British armed forces . The United States Army Air Service was equipped with SPAD S.XIII , Nieuport 28 , Salmson Sal II and Airco DH4 aircraft.

Armies and Corps of the United States Army