A civil registered Nieuport 28 after the war

Quentin Roosevelt in his Nieuport

Eddie Rickenbacker in front of his Nieuport

The aircraft was designed by Gustave Delage and flew for the first time in June 1917. Contrary to the connection of the wings with V-struts, as in the Nieuport 27 , two parallel struts were now used. A powerful Gnôme 9N rotary engine with 160 HP (119 kW) was used as the drive.

The aircraft was to be used in large numbers by French and American fighter squadrons. However, the French Air Force canceled all orders and preferred the SPAD S.XIII . The machines were delivered to the American Expeditionary Force , or AEF for short . The AEF received a total of 287 machines.

It was the first aircraft that AEF pilots used in aerial combat during World War I. During the second patrol mission of the AEF on April 14, 1918, two enemy machines were shot down. The pilots were Alan Winslow and Douglas Campbell of the 94th Aero Squadron. Although the Nieuport 28 was already considered obsolete and should be replaced by the SPAD S.XIII, American pilots were able to report many more aerial victories than losses of the machine.

The machine was more manoeuvrable than the SPAD, but often had engine problems. The covering could come off in a dive. Nevertheless, the machine was flown by many American pilots, such as Quentin Roosevelt  - the son of the former US President Theodore Roosevelt  - and the flying ace Eddie Rickenbacker .

At the end of the war, another 600 modified N.28A.1s were ordered by the USAS. The machines had minor structural improvements and new Marlin machine guns. The planes were mainly used as training aircraft. Twelve machines went to the US Navy to take off from battleships. After the war, four civil aircraft flew between Paris and London in 1920 during a postal strike in France. The last Nieuport 28 was withdrawn from the Swiss Air Force in the 1930s . 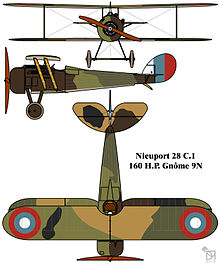 Three-sided view of the Nieuport 28