Shortly after the beginning of the Greek Revolution of March 25, 1821, various regional councils of government were formed, which were replaced by the first National Assembly of Epidavros in early 1822 , which also passed the first constitution of modern Greece and set up a government under the leadership of Alexandros Mavrokordatos . The government under Mavrokordatos called itself the Provisional Administration of Greece . Greece declared itself independent on January 15, 1822, but has not yet been recognized internationally.

At the third National Assembly in Trizina in 1827, the founding of the Hellenic State was decided and Ioannis Kapodistrias was appointed the first regent and head of state for a seven-year term. He bore the title of governor of Greece ( Greek Κυβερνήτης τῆς Ἑλλάδος ), the epoch of his reign is then often referred to as governorate ( Greek Κυβερνεῖον ). 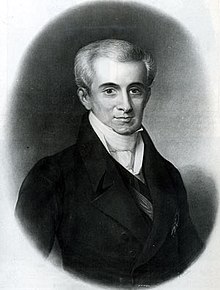 Ioannis Kapodistrias as governor of Greece (lithograph by L. Nikiadis)

In order to be able to react to the enormous military threats posed by the Ottoman Empire and the numerous humanitarian and domestic political challenges, shortly after his inauguration in January 1828, Kapodistrias demanded that the third National Assembly temporarily suspend the constitution and give him far-reaching powers was also approved by the National Assembly.

During the reign of Kapodistrias there were decisive military victories against the Ottoman Empire and the international recognition of the sovereignty of Greece by the London Protocol of 1830. Further steps towards the establishment of the Greek state were the introduction of the phoenix as the currency of Greece in 1828 and the foundation of the first investment bank, insurance company and officers school.

Great efforts also had to be made to cope with the humanitarian consequences of the war, in particular to care for the numerous war orphans and to plant the agricultural areas that had been systematically destroyed by the Ottomans and especially their Egyptian vassals under Ibrahim Pasha .

In 1829 the first democratic direct elections took place in Greece, whereby Kapodistrias was able to enforce against political opposition that all residents of Greek origin should be eligible to vote and not just those who had land ownership. The fourth National Assembly of Argos emerged from the election, which retrospectively confirmed the actions of Kapodistrias and decided to create a 27-member Senate ( Greek Γερουσία ), whereby the governor Kapodistrias should be accountable to the next National Assembly and not to the Senate.

Although Kapodistrias tried very well to involve the long-established regional rulers of Greek descent from the time of the Ottoman rule in his policy, he ultimately failed to avoid a confrontation with them. Many families from the local Greek elite, such as the Mavromichalis family , had supported the Greek revolution and had many of their own family members as victims. These families claimed many old privileges, such as the right in the name of the state but on their own to collect taxes in their local sphere of influence. Kapodistrias refused. Many Greek traders who had become prosperous through maritime trade and who had supported the Greek Revolution with large sums of money now also claimed adequate financial compensation for their expenses. Kapodistrias recognized the traders' right to compensation in principle, but had to put them off until later due to the tight budget situation. Many scholars like Adamantios Korais sharply criticized Kapodistrias for centralizing power too much.

Although Kapodistrias at the beginning of his term of office still enjoyed general recognition among the long-established Greek elite, the attitude of a large part of the elite towards Kapodistrias increasingly turned into open hostility. There were local uprisings, which Kapodistrias countered successfully militarily; he also had Petros Mavromichalis imprisoned in a fortress. Traders and local rulers from all over Greece then met on the island of Hydra and conspired to murder Kapodistrias. The newspaper Apollon was printed on Hydra and openly called for the murder of Kapodistrias. Although Kapodistrias was aware of the open threats against him, he categorically refused to surround himself with a military bodyguard and employed only a one-armed bodyguard. While going to church on Sunday, Ioannis Kapodistrias was finally murdered on September 27, 1831 in Nafplio by Konstantinos and Georgios Mavromichalis right in front of the entrance to the church. He had previously placed Konstantinos and Georgios Mavromichalis under police supervision, but the police officers who were supposed to guard both were involved in the conspiracy against Kapodistrias.

The brother of Ioannis Kapodistrias Augustinos Kapodistrias was appointed chairman of the administrative commission for the transition, but gave up after a few months due to the insurmountable political quarrels.

Soon afterwards, the signatory powers of Greek independence, Great Britain, France and Russia, who had long been critical of the republican aspirations in Greece and always preferred a monarchist form of government for Greece. In 1829, Prince Philip of Hessen-Homburg was traded as a candidate for the Greek royal throne. The English proposal was also approved by Russia but rejected by France. In February 1830 they offered the Greek crown to Leopold von Sachsen-Coburg and Gotha , who, however, refused in favor of the Belgian crown. In 1832 they proposed Otto von Wittelsbach . The second London Protocol , which Otto's father, King Ludwig I of Bavaria, signed for Otto on May 7, 1832 and which was unanimously adopted by the Greek National Assembly on August 8, 1832, appointed Otto King of Greece. From December 1832 on, Otto was on his way through Italy to his new kingdom . On board the British frigate Madagascar , he reached the then Greek capital Nafplion on January 25, 1833 .