The Kingdom of Greece ( Greek Βασίλειο της Ελλάδος Vasílio tís Elládos ) existed from 1832 to 1924 and from 1935 to 1973. After the First Hellenic Republic, it was the second form of government of Greece in modern times . Except for the first king from the House of Wittelsbach , all of the following came from the House of Oldenburg .

In 1821 the Greek Revolution began against the Ottoman Empire , which was supported by the great powers France, Great Britain and Russia. On October 20, 1827, the decisive battle of Navarino took place, in which the Greeks, with the help of France , Russia and Great Britain, won the victory against the Turks. In 1827 the Greek National Assembly elected Ioannis Kapodistrias president for seven years. However, after revolts broke out in Mani in the Peloponnese and he had the local prince, Petros Mavromichalis, arrested, he was murdered in 1831 by the brother and son of Mavromichalis. His brother Augustinos Kapodistrias , who ruled until 1832, was appointed as his successor .

After Prince Leopold of Saxe-Coburg and Gotha , who later became King of the Belgians , had rejected the Greek crown proposed to him, at the London Conference of 1832 , at which the independence of Greece was internationally recognized, the Wittelsbach Prince Otto of Bavaria , son of Bavarian King Ludwig I , intended as King of Greece. The London Protocols established the future status of the new state and the borders with the Ottoman Empire. Athens , which was recaptured by the Ottomans in 1827 , was chosen as the capital .

After the Greek revolution against the rule of the Ottoman Empire, the Greek interest in the reintroduction of the Olympic Games awoke . The Olympics brought into being by Evangelos Zappas are considered to be the most important precursors of the modern Olympic Games and, by a royal decree from Otto I, viewed as a national task of high standing, which also received international attention. The first of the Olympics took place in the city center of Athens in 1859 and others took place in the specially built Panathinaiko Stadium until 1889 . The first modern Olympic Games were held in Athens in 1896 and proved to be a great success. Although the number of participants was small with only around 250 athletes, it was the largest sporting event that had taken place since ancient times. After the two far less successful Games in Paris in 1900 and in St. Louis in 1904 , the Olympic Intermediate Games in Athens in 1906 again focused on sporting competitions, which are seen as the salvation of the Olympic idea.

In 1864 the Republic of the Ionian Islands joined the kingdom, which has since been ruled by Georg I from the House of Oldenburg after a bloodless revolt against King Otto . The Ionian Islands were previously under the protection of the United Kingdom . In 1881 Greece conquered Thessaly from the Ottoman Empire. When a Greek uprising against the Turkish rulers broke out in Crete in 1896 , the kingdom supported the rebels against the Ottoman Empire, which led to the Turkish-Greek War , which ended in 1897 with extensive autonomy of the Cretan state under the protectorate of the Greek Prince George . Crete had been virtually independent since 1898 and unilaterally declared unification with Greece in 1908, which was recognized by the Kingdom in October 1912 and internationally in 1913.

Immediately after the United Kingdom of Great Britain and Ireland took over Cyprus in 1878, the Cypriots first demanded unification with Greece. In the Second Balkan War of 1913 Greece conquered Southern Epirus and Macedonia from Tsarist Bulgaria , which Greece was assured in the Peace of Bucharest . In the same war, Greece was able to finally conquer Crete and the eastern Dodecanese from the Ottoman Empire.

During the First World War , Greece fought on the side of the Allies against Tsarist Bulgaria and the Ottoman Empire. In 1916, British and French troops landed in Thessaloniki in support of Greece . Nevertheless invaded in 1917, the Central Powers prior to Greece, after Constantine I . had to leave the country. In September 1918 the Allies launched a new offensive against the Central Powers near Thessaloniki and forced them to surrender.

From 1918 to 1923 Greece occupied the Albanian Northern Epirus and during the Greco-Turkish War from 1919 to 1923 the Turkish territories of Eastern Thrace and Izmir from 1920, and in 1923 Western Thrace . In 1920 the kingdom demanded the "return" of Istanbul in order to make it the capital as a reminder of the medieval Constantinople . After the loss of the Turkish territories, many Greeks living there immigrated to the heartland and the Megali Idea to restore the Byzantine Empire was abandoned.

In 1923, Benito Mussolini tried in vain to conquer Corfu . After the Paris Peace Conference in 1946 , Greece received the Italian Aegean Islands in 1947 . After the end of the Second World War , the Greek Cypriots again demanded the connection to Greece and the kingdom supported their demand from 1954. Thereupon, from 1956, Turkey raised claims on Cyprus, which led to the expansion of the Cyprus conflict . In the London and Zurich Agreements of 19 February 1959, the status was provided as an independent state for Cyprus and on 16 August 1960, the statement was made the independence of Cyprus .

Crises of the monarchy 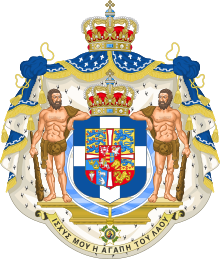 In 1862 King Otto I was driven out by a military coup ; whereupon he returned to his Bavarian homeland. In his place, the great powers appointed Prince Wilhelm of Denmark from the House of Schleswig-Holstein-Sonderburg-Glücksburg , the son of the future Danish King Christian IX. , to the king. Prince Wilhelm took over the government in Greece on June 6, 1863 under the name Georg I.

Under his son Constantine I , a profound controversy arose during the First World War in 1915 with Prime Minister Eleftherios Venizelos , who sympathized with Great Britain , which led to the country being divided into a Venizelist (Macedonia, the East Aegean Islands and Crete) and a Royalist part in 1916/1917 (South Roumeli and Peloponnese) was split and ruled by two governments with two armies until King Constantine left the country and his second-born son Alexander succeeded him. After his death in 1920, a referendum called Constantine I back, but in 1922 he was overthrown again by a putsch led by the Venizelist officer Plastiras . His son King George II was immediately sent on vacation until a referendum in March 1924 resolved to abolish the monarchy. From 1925 to 1926, General Theodoros Pangalos ruled dictatorially and repealed the constitution. In 1930 the normalization of relations with Turkey began when both states renounced mutual territorial claims.

After the royalists came back to power in 1935, George II returned to Greece and renewed the monarchy; by supporting the dictatorship of Ioannis Metaxas , however, he soon discredited it among the people. During the Second World War in 1940 the Greek army repulsed an Italian offensive and advanced as far as southern Albania. It was only with the support of the German Wehrmacht and Bulgarian armed forces that the Kingdom of Italy and the Esercito Italiano managed to occupy large parts of Greece, which was subsequently divided into an Italian, a German and a Bulgarian occupation zone, while the king and the government in exile followed Fled Cairo . From 1942 on, royalists and communists fought against the occupiers, who withdrew in 1944. After the end of the war, the question of the continued existence of the monarchy was initially postponed; the king appointed Archbishop Damaskinos as regent in his place, until the constitutional question was resolved by a referendum in September 1946. Under the influence of the division of the nation caused by the civil war , 78 percent of the vote, which took place under irregular conditions, voted for the monarchy.

On February 18, 1952, Greece joined NATO together with Turkey and in 1961 an Association Agreement was concluded with the European Community . In 1963, several right-wing governments succeeded each other before the Central Union under Georgios Papandreou could win an election. In 1967, the last Greek king, Constantine II , went into exile without abdicating after a failed attempt to overthrow the Greek military dictatorship . The ruling military junta appointed Major General Georgios Zoitakis as regent. He acted as head of state in the absence of the king; formally, the king remained head of state. It was not until July 1, 1973 that the monarchy was abolished.

After the end of the military dictatorship in 1974, the monarchy was finally rejected in a referendum , in which only 30 percent of the electorate voted to keep it. Nevertheless, Constantine II sees himself as king of Greece to this day, which strains his relationship with the republic. While left parties clearly reject the monarchy, the conservative Nea Dimokratia behaves neutrally, as both opponents of the monarchy and monarchists are in the party’s supporters.

Family tree of the royal family of Greece