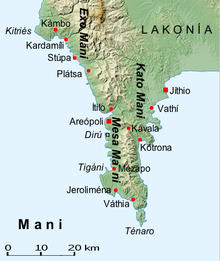 The Mani peninsula in the Peloponnese

The Mani ( Greek Μάνη ) is a stretch of land in the south of the Greek peninsula Peloponnese - more precisely its "middle finger". The Mani begins south of the city of Kalamata and ends at the tip of the middle finger ( Cape Tenaro , also called Cape Matapan). The cape is more southerly than Tunis and is the southernmost mainland point in Europe after Tarifa (Spain). The main town of the Mani is Areopoli .

The village of Vathia in the south of the Mani

Apartment towers on the Mani

Low clouds over the southern foothills of the Taygetos Mountains

The Mani, characterized by the up to 2,400 meter high Taygetos Mountains and its southernmost foothills, was a refuge for many people fleeing from foreign conquerors and for the same reason also ideal for pirates until the 20th century because of its impassability . Due to the special topography , the Mani was an area almost free from government interference and developed a special class of people with their own cultural form. Although there were individual churches in fortified places much earlier, Christianity did not really gain a foothold until the 9th century , when countless churches and small churches were built and some of them are still decorated with beautiful frescoes .

The Mani has been known to have been populated since the Neolithic , traces of settlement have been found in several caves, e. B. in the Apidima caves or the Alepotrypa cave . Subsequently, Dorians , Spartans , Slavs (especially the Melingers ), Franks , Venetians and Turks crossed the Mani. There is not much left of their buildings, but their descendants still live here today. However, none of the “occupying powers” ​​over the centuries was able to suppress the manias, they always remained free, wild, unpredictable and at odds with one another, which is expressed in the sometimes very high maniotic defensive and residential towers . Family feuds spanning generations left their mark on the maniacs. It is precisely in this region that the beginnings of the Greek liberation from the 400-year rule of the Ottoman Empire were organized and started.

The traditional songs of the dead , the mirologia , formed an integral part of maniacal culture . These were presented to the mourners after the death of family members or people close to them. Often the performers let the deceased's entire life pass in review and sang themselves in trance-like states. Mostly women brought this death lament.

The Mirologia are the only thing the next Maniaten own churches - and fortified tower architecture of folk culture have produced. The Archeology assumes that the dead songs of the Spartans and the prayers of the oracles of Cape Tenaro already so sounded.

Due to the population exodus on the Mani in recent years, however, there is almost no cultural exchange between the generations, so that this tradition will disappear sooner or later. There are very few recordings of traditionally performed Myrologia. One of the few well-known interpreters is Diamanda Galás , who originally came from Mani . In her medley Tragoudia apo to aima exoun fonos , the traditional songs of the dead can be heard mixed with ancient influences.

Panorama over the Messenian Gulf , taken above the village of Pigi, Exo Mani. In the middle of the picture (level by the sea) are the places Agios Nikolaos and Stoupa

A very long and cruel chapter of maniacal culture deals with the blood revenge (vendetta). For centuries, the entire Mani was riddled with murders and blood revenge feuds. It was mostly about land and influence. Often, however, personal disputes between warring family clans were also resolved through the vendetta.

The process was clearly structured. The members of the clan gathered and declared war on the hostile family, mostly by simply ringing the local church bells. The aim of the feud was to kill as many members of the enemy clan as possible. Women and children were not allowed to be shot, but served as supplies for ammunition and food. The men holed up in the high residential and defense towers from which they tried to exterminate their enemies with the help of pistols, rifles and cannons. If one side needed a so-called Treva (great time out), e.g. B. for funerals or the harvest, a ceasefire was negotiated. The feuds did not end until the enemy clan was wiped out or left the city.

The greatest Treva was proclaimed in 1821 on the entire Mani. At that time, Petros Mavromichalis went to war against the Turks with the united clans of the Mani .

Some blood revenge feuds lasted for years and often ended with several hundred deaths. On average, some clans had up to 500 armed men who were not called son by their mothers, but Oplo (Greek rifle). The proven longest feud took place in Vathia between four families. It lasted over 40 years and claimed more than 200 victims.

Chapel of Metamorphosis Sotiras in Nomitsi, a typical little church on the Mani

Even the Easter customs in Mani are deeply linked to blood revenge and rebellion . According to legend, the Ottomans murdered a head of a powerful maniac clan during Holy Week in 1780. His mother's death lament was not about mourning or loss, but merely blood revenge: "... I don't want wreaths in my apron or red eggs in the basket, only justice for my son, the leader of the maniots ... stab everyone Turks and burn their castle " . And so it happened, on Easter Sunday 1780, the Ottomans were driven out in a bloody slaughter . In order to forget the pain of loss, the maniots in some places moved the Easter celebrations from Easter Sunday to Easter Monday.

Although life in the Mani gave more cause for singing Mirologia than for dancing, two folk dances were created here : the Palio Maniatiko (old mania table) , which is based on ancient dance templates, and the modern Maniatiko, a further development of the Palio Maniatiko, which also sporadically Includes step sequences of the Kalamatiano . Both dances are only practiced in mani to this day.

Important tourist places are Itylo, below Areopoli, and Stoupa, a little to the north, on the sunny side of the Mani. The stalactite cave at Pyrgos Dirou , which can be entered by boat, and the village of Vathia with twelve well-restored residential towers are among the main attractions of the Mani. One of the oldest places of Mani could Kardamili be already in the Iliad of Homer is mentioned.

View over Kardamili to the southern Mani Peninsula