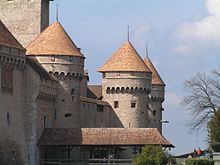 Defense towers in the structure of a castle ( Chillon , Switzerland)

A fortified tower is a historical fortification that was built primarily for defense, whether integrated into larger fortifications or on its own. Defense towers were used to protect settlements, castles and strategically important points such as B. Bridges. In addition, they acted u. a. also as a waiting or rule symbol .

In ancient times and in the Middle Ages , defensive towers offered a significant defense advantage due to their elevation above the surrounding area. Due to their height, projectiles received greater penetration power, and contemporary long-range weapons such as bows or crossbows could also be used more effectively from a higher position. To enable the use of these weapons, defense towers end with an open or roofed defense platform , which is surrounded by a parapet and often equipped with battlements . In the lower floors of the tower, in addition loopholes included.

The majority of the medieval defense towers were integrated into a larger fortification, for example in a city ​​wall or in the building complex of a castle . Early medieval towers were often built in wood, from the High Middle Ages stone construction became the rule for larger structures. Stone defense towers could strengthen a curtain wall . Round (or semicircular) towers proved to be particularly stable against the use of siege equipment.

Defense towers also appeared as single standing structures; often they took on the function of a guard post (watch tower ) or a control station (an example of this is the Binger mouse tower , which served as a customs watch tower from the 14th century). In rural and sparsely populated areas, they could take on the role of a small refuge . Fortified church towers were sometimes used as refuge for the resident residents in emergencies (cf. fortified church ).

Sometimes, for tactical reasons, defense towers had a right-hand spiral staircase inside (viewed from below) so that the attacker coming from below was hindered with his right arm when striking with the sword through the center post of the stairs, while the defender coming from above was right-handed could reach his sword well across the steps.

In particular, stand-alone defense towers, like other medieval fortifications , were built, if possible, in hard-to-reach places that were easy to defend.