George I, King of the Hellenes

Prince Wilhelm was born on December 24, 1845 as the third descendant and second son of Prince Christian of Schleswig-Holstein-Sonderburg-Glücksburg and his wife Louise of Hesse in Copenhagen . In accordance with the resolutions of the London Protocol , his father was appointed presumptive heir to the throne of the childless Danish King Frederick VII in 1853 . As a result, Wilhelm and his siblings were given the title “Prince of Denmark” and the salutation “Royal Highness” . Judging by the circumstances at the time, Prince Christian's descendants led a simple life. At the side of his older brother, Prince Friedrich , Wilhelm began an officer career in the Royal Danish Navy .

After the removal of the Greek King Otto from the House of Wittelsbach in 1862, the Greek National Assembly looked in Europe for a suitable successor. In accordance with the major European powers , the National Assembly elected Prince Wilhelm on March 18th jul. / March 30,  1863 greg. to the new king and gave him the ruler name Geórgios A '(George I.). Led by Prime Minister Benizelos Rouphos and Konstantin Kanaris , a Greek delegation offered Wilhelm the royal dignity on June 6, 1863, which created the peculiar situation that he assumed his royal office shortly before his father, who was only named Christian IX on November 15, 1863. became Danish king.

After visits to the courts in Saint Petersburg , London and Paris , which had massively supported his candidacy, Georg traveled to Greece on October 22, 1863 on board the flagship Hellas from the French Mediterranean port of Toulon and made a solemn entry into Athens on October 30 . 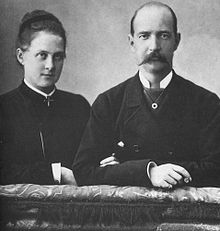 On October 15th Jul. / October 27, 1867 greg. Georg married Grand Duchess Olga Konstantinowna from the house of Romanov-Holstein-Gottorp , a granddaughter of the Russian Tsar Nicholas I, in the court chapel of the Saint Petersburg Winter Palace . She was the daughter of Grand Duke Konstantin Nikolajewitsch Romanow and his wife Alexandra von Sachsen-Altenburg .

British Queen Elizabeth II's husband , Philip, Duke of Edinburgh is a grandson of the King. Edward, 2nd Duke of Kent , and the wife of the former Spanish King Juan Carlos I , Princess Sophia of Greece and Denmark , are great-grandchildren of George I. 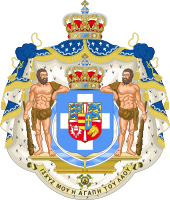 Royal coat of arms of George I.

George I in a late photograph

In Greece, the focus was initially on drafting a new constitution . Georg had appointed the Dane Wilhelm Graf Sponneck as advisor and private secretary , who led the negotiations on the distribution of power between parliament and the crown. However, Sponneck encountered resistance from the officials who were still appointed under King Otto, who rejected him on the grounds that he was neither a citizen nor an employee of the state. After Sponneck was naturalized and elected as a member of parliament, his openness and directness brought him great popularity, which made it possible for him to gain great powers in the new constitution at the expense of parliament. On November 28, 1864, Georg took the oath on the constitution, which for the time, contained modern democratic elements, especially with regard to the right to vote. To emphasize his role as a constitutional monarch , George chose the title "King of the Hellenes" instead of "King of Greece".

Georg was determined not to repeat the mistakes of his unpopular predecessor. He learned the Greek language and was very close to the people on walks in Athens without any ceremony. In order to get to know the previously unknown country, he went on extensive sightseeing trips. The marriage to an orthodox Russian grand duchess and the upbringing of the descendants in the same faith strengthened the people's feeling of togetherness with the new dynasty.

Despite the adoption of a new constitution, Greece remained extremely troubled internally. Between 1864 and 1910 there were 21 parliamentary elections and a total of 70 mostly short-lived governments. The persistently unstable domestic political situation, a corrupt civil service and the poor economic situation led to the national bankruptcy in 1893 , which is why state revenues had to be subject to international financial control .

In terms of foreign policy, Greece pursued the unification of all the territories populated by Greeks in one state ( Megali Idea ), which resulted in natural opposition to the Ottoman Empire . A first success was the accession of the previously under British protectorate standing Ionian islands that were connected to Greece in 1864, making the Enosis movement gained new popularity. As a result of the Russo-Ottoman War of 1877/78 , Greece was assigned to Thessaly and parts of Epirus in the Treaty of Berlin (1881) . When Georg pushed forward plans to conquer Epirus militarily in 1885, he was faced with the united opposition of the major European powers, whereupon the planned campaign was broken off. After the outbreak of an uprising by the Greek majority against the Ottoman rule in Crete , King George supported the rebels, which is why the Turkish-Greek War broke out in 1897 , in the course of which the poorly equipped Greek army suffered a crushing defeat. In the Treaty of Constantinople, Crete was placed under international control and Greece had to pay high reparations .

During the reign of George, the first modern Olympic Games were held in Athens in 1896 , of which he was the patron. The opening took place in Athens' Panathinaiko Stadium , which Georg had excavated and later reconstructed by the architect Ernst Ziller , his master builder for the king .

In 1909 insurgent officers forced the king to undertake far-reaching reforms ( revolt of Goudi ) and to dismiss his sons from the army. In addition, Georg gave in to the pressure of the officers and appointed Eleftherios Venizelos as the new Prime Minister. This should play a dominant role in Greek politics in the next few years. Venizelos forged the Balkan Federation as a counterweight to the Ottoman Empire and forced the First Balkan War on it in October 1912 . In the course of this, the Greek army commanded by Crown Prince Constantine achieved great military successes. In November 1912 Georg entered the conquered Thessaloniki together with Konstantin and Venizelos .

Lithograph of the assassination of George I.

On the afternoon of March 18, 1913, Georg was walking through Thessaloniki as usual without any protective measures worth mentioning. At the height of the White Tower , the assassin Alexander Schinas shot him in the back from close range for reasons that were later unclear . Georg died immediately from his gunshot wounds. On board the royal yacht Amphitrite , George's body was transferred to Athens and consecrated in the Cathedral of the Annunciation .

He was buried in the Royal Cemetery in the park of Tatoi Castle . His eldest son succeeded him as Constantine I on the throne. With a reign of almost 50 years, King George was the longest reigning Greek monarch of modern times.