Alexandra was the youngest of the four surviving daughters of Duke Joseph von Sachsen-Altenburg (1789–1868) from his marriage to Amalie (1799–1848), daughter of Duke Ludwig von Württemberg . Together with her sisters Marie , Therese and Elisabeth , she was trained by Carl Ludwig Nietzsche . Alexandra was in contact with his son Friedrich Nietzsche and met him in Basel in 1869 on a trip to Switzerland. 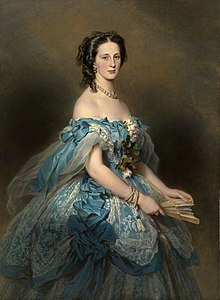 After visiting his sister Olga in Stuttgart, Grand Duke Konstantin (1827-1892) met 14-year-old Alexandra in Altenburg. During the family's spa stay in Bad Kissingen in 1844, her pleasant appearance and lively spirit attracted the attention of the Russian tsarist family.

Konstantin was eager to marry Alexandra and wrote to his parents: " These or none ". Alexandra arrived in Russia in 1847 and married the Grand Duke on August 30th July. / 11th September  1848 greg. in St. Petersburg. She converted to the Russian Orthodox Church under the name Alexandra Iossifovna.

She was later known at court under the name " Tante Sanny ". She supported and harassed her husband in his reform activities, which were reflected in the abolition of serfdom and the constitution of her brother-in-law Alexander II . Alexandra was considered one of the most beautiful and imposing women at the Petersburg court. She was a close friend of Tsarina Marija Alexandrovna and announced after Tsar Alexander II turned to Princess Dolgoruki : “ This will be the lot for us all: abandoned, lonely we too will die, while our men seek diversion from other women. Poor Empress! ”.

Alexandra was a talented musician and composed marches. Johann Strauss dedicated the Grand Duchess Alexandra Waltz op.181 and the Strelna Terrace Quadrille op.185 to her.

When her husband turned to the ballerina Anna Wassiljewna Kuznezowa (1847–1922), she remained connected to him anyway, condoling him even on the early death of two of Constantine's children with their beloved. In 1870 their eldest son and his American lover tried to steal the diamonds that Tsar Nicholas I had given her. He was banned and declared unresponsive. In 1879 her youngest son died of tuberculosis .

After the death of her husband, she was among other things heir to the Palace of Constantine in Strelna. Seriously ill in old age and almost blind, she lived in seclusion , partly in the St. Petersburg Marble Palace , partly in Wiesbaden . Alexandra is buried at the side of her husband in the Peter and Paul Cathedral .

Alexandra with her family

She had the following children with Constantine: