Edward, Duke of Kent, at a celebration of the Liberation Day of the Channel Islands in 2007 in Jersey

Edward George Nicholas Paul Patrick Windsor was born in 1935 to Prince George, 1st Duke of Kent , and his wife, Princess Marina of Greece and Denmark . His father was the fourth son of King George V and Queen Mary . His mother was the daughter of Prince Nicholas of Greece and granddaughter of King George I of Greece . Edward initially carried the title Prince Edward of Kent and inherited the title of Duke of Kent as the firstborn in 1942, after his father's death in a plane crash . His younger siblings are Princess Alexandra (* 1936) and Prince Michael of Kent (* 1942).

The duke attended Eton College and Institut Le Rosey in Rolle VD / Gstaad ( Switzerland ) before moving to the Royal Military Academy Sandhurst . After graduating from Sandhurst, he was promoted to lieutenant with the Royal Scots Grays . His military career spans 21 years. In 1976 he took his leave with the rank of lieutenant colonel . He was promoted to major general on honorary basis in 1983 , and to field marshal in 1993 . 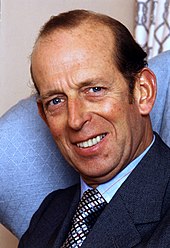 On June 8, 1961, he married Katharine Worsley , daughter of Sir William Arthrington Worsley, 4th Baronet , whom he had met during his stationing at Catterick . Although the Duchess converted to Catholicism in 1994, the Duke did not lose his place in the list of heirs to the throne , as the Act of Settlement of 1701 provides for such a loss only in the event of marriage to Catholics, but not in the event of a later conversion of the spouse. At the time of the marriage, Katharine Worsley was still a member of the Anglican Church . The official residence of the Duke and his wife is Wren House in the grounds of Kensington Palace in London . However, the two have been going their separate ways privately since the 1980s, although they have never officially separated and continue to appear together on official occasions. In everyday life, the duchess lives in a rented apartment not far from the palace.

The couple has three children who do not perform any representative duties:

As the cousin of Queen Elizabeth II - his father and the Queen's father were brothers - Edward fulfills a number of representative duties, both as a representative of the Queen and as a representative of selected organizations. He succeeds his mother as President of the All England Lawn Tennis and Croquet Club and patron of the Wimbledon tennis tournament , where he presents the trophies to the winners at the awards ceremony. From 1971 to 2000 he was also President of the Football Association , the English football association. He is the Grand Master of the United Grand Lodge of England of Freemasons . After retiring from the military, he was Vice President of the British Trade International Economic Development Program . He was succeeded in this post by Andrew, Duke of York , the second son of Queen Elizabeth II. Edward continues to be the patron of Trinity College of Music . 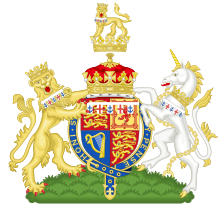 Coat of arms of Edward, 2nd Duke of Kent

His full title since then has been: Field Marshal His Royal Highness Prince Edward George Nicholas Paul Patrick, Duke of Kent, Earl of Saint Andrews, Baron Downpatrick, Royal Knight of the Most Noble Order of the Garter, Knight Grand Cross of the Most Distinguished Order of Saint Michael and Saint George, Knight Grand Cross of the Royal Victorian Order, Aide-de-Camp to Her Majesty