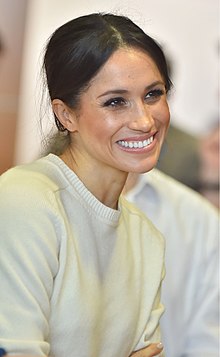 HRH Meghan, Duchess of Sussex , German Meghan, Duchess of Sussex (* 4 August 1981 as Rachel Meghan Markle in Los Angeles , California ), is US citizen and since her marriage with Prince Harry on May 19, 2018 a member of the British Royal Family . She was previously known as actress Meghan Markle in the role of Rachel Zane in the television series Suits .

Markle was born in Los Angeles in 1981 to an American with Irish - German roots and an Afro - American mother. Her mother, Doria Loyce Ragland, worked in a travel agency; her father, Thomas Wayne Markle, worked, among other things, as a lighting director for the sitcom A Terrible Nice Family . Meghan Markle got to know working on the set for several years . In 1988 her parents divorced. From her father's first marriage, she has two half-siblings who are around 15 years older. From 2011 to 2013, she was married to actor and producer Trevor Engelson, with whom she began a relationship in 2004.

Studied and worked as an actress

After graduating from high school , Markle studied drama and international relations at Northwestern University . She then worked for a few months in the US embassy in Buenos Aires , where she had completed an internship during her studies .

While visiting her hometown of Los Angeles, an artist agency became aware of her. She made her television debut in 2002 with an episode on the ABC soap opera General Hospital . This was followed by other small appearances in television series and supporting roles in some films. In 2007, Markle starred as a model in four episodes of the television game show Deal or No Deal . She then had her first recurring roles in series such as 90210 as Wendy and in Fringe - Borderline cases of the FBI as Amy Jessup . From 2008 she played in pilot episodes with five different series, none of which were commissioned. Including the ABC pilot Good Behavior (2008), in which her later Suits colleague Patrick J. Adams also participated.

From 2011 to 2018 Markle played in in Toronto twisted legal drama Suits of USA Network is the helpful paralegal Rachel Zane, which the main character Mike Ross, played by Patrick J. Adams, closer coming soon. On the occasion of her engagement to Prince Harry in November 2017, she announced that she would be leaving Suits after the end of the seventh season (2018) and ending her acting career in order to pursue her future duties as a member of the British royal family .

Member of the British Royal Family 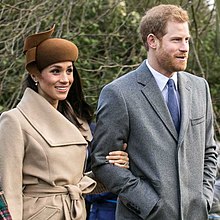 She has been in a relationship with the British Prince Harry since June 2016. At the beginning of November 2016, he issued a statement through his press secretariat, in which Markle was referred to as his girlfriend and the way the press had dealt with the relationship was criticized. On November 27, 2017, the couple's engagement was announced publicly. On March 6, 2018, Markle was baptized and confirmed by Archbishop of Canterbury Justin Welby , Spiritual Leader of the Church of England , at St James's Palace in London . On May 19, 2018, Prince Harry and Meghan Markle's wedding took place in St. George's Chapel on the grounds of Windsor Castle. She has had the courtesy title of Her Royal Highness, The Duchess of Sussex since the wedding . On May 6, 2019, the couple's first child, Archie Harrison Mountbatten-Windsor, was born.

The coat of arms of Meghan, Duchess of Sussex shows the coat of arms of Prince Harry (the royal coat of arms of the United Kingdom with a tournament collar with five bibs) in the split shield on the heraldic right side (left as seen from the viewer). The heraldic left side stands for Meghan. The blue background symbolizes the Pacific on the California coast. The two golden stripes represent the rays of the sun in California. The three feathers symbolize communication and the power of the word. The sign holder on Meghan's side is a white songbird . It stands on a pedestal of lawn with California poppies and Chinese winter blooms .

Markle was an ambassador for the international charity One Young World , at whose annual summit in Dublin in 2014 she spoke about gender equality and modern forms of slavery . In 2016 she also attended the summit. In 2016 she was also appointed ambassador for World Vision Canada , for which she traveled to Rwanda in connection with the Clean Water Campaign , which is committed to the provision of clean water . She also traveled to India to raise awareness of issues such as education , hygiene , empowerment , economic development and health for women and young girls. She was an ambassador for UN Women .

Since her marriage to Prince Harry, she has taken on representative and charitable tasks for the royal family. So she accompanied Harry on his Pacific trip in 2018 and visited the Invictus Games in Australia with him . On January 8, 2020, the couple announced that they intended to step down as senior members of the royal family and become financially independent. On January 18, Buckingham Palace announced that Harry and Meghan will voluntarily renounce the use of the title “ Royal Highness ” with effect from April 1, 2020 , although the Queen will not deprive them of the title. They said goodbye to their Instagram account Sussex Royal on March 31, 2020 , as from April 2020 they will no longer have the title “royal”. They also want to repay a government grant of £ 2.4 million to renovate and convert Frogmore Cottage .

In 2020, Markle found himself in a lawsuit with the Mail on Sunday .