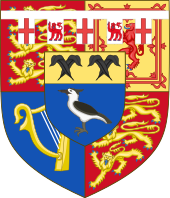 Coat of arms of Birgitte, Duchess of Gloucester

HRH Birgitte, Duchess of Gloucester (born June 20, 1946 in Odense , Denmark ) is a member of the British royal family . Her husband Richard, Duke of Gloucester and Prince of Great Britain and Ireland, is a grandson of King George V.

Birgitte Eva Henriksen was born in Odense as the daughter of a lawyer. When her parents separated, she took her mother's maiden name, Van Deurs . Among other things, she worked at the Danish Embassy in London .

In February 1972, she became engaged to Richard, the second son of HRH Henry, Duke of Gloucester and Alice, Duchess of Gloucester . The marriage took place on July 8, 1972 .

Six weeks after the wedding, her husband's older brother, William of Gloucester , crashed his plane and died at the crash site. As a result, her husband inherited the Duke of Gloucester title when his father died in 1974. As his wife, she has since held the courtesy title of Duchess of Gloucester .

The couple has three children:

None of the children have any official duties. The couple live in Kensington Palace in London .

The Duchess is the patron of many British organizations. Her interests and main areas of activity are particularly in the areas of medicine , education and working with the disadvantaged.

She is Honorary Colonel of the Bermuda Regiment and the 7th Battalion of the Rifles Regiment and patroness of two ships in the Royal Navy .