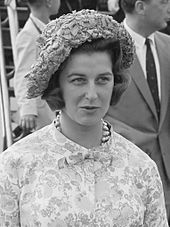 When she was born she was sixth in the British line of succession , but has moved back further and further over the years.

Princess Alexandra of Kent was born in London on December 25, 1936, the second child of George, 1st Duke of Kent , and Princess Marina, Duchess of Kent (nee Princess Marina of Greece and Denmark) . Her mother was a cousin of Prince Philip . Alexandra lost her father at the age of five when he was killed in a plane crash during World War II . Her siblings are Edward, 2nd Duke of Kent (* 1935), and Prince Michael of Kent (* 1942).

She was baptized on February 9, 1937 in the private chapel of Buckingham Palace by Archbishop of Canterbury Cosmo Gordon Lang . Your godparents were the brother of your father King George VI. as well as his wife Elizabeth , Carl Theodor Graf von Toerring-Jettenbach, Alexander Cambridge, 1st Earl of Athlone , Queen Maud of Norway , Prince Nicholas of Greece , Princess Olga of Greece and Princess Beatrice of Great Britain and Ireland .

Alexandra spent much of her childhood in her parents' Coppins country house in Ives, Buckinghamshire . During the Second World War she lived with her grandmother, Queen Mary , widow of King George V, in Badminton House in Gloucestershire . She was the first British princess to attend a public school, the Heathfield School at Ascot . She also studied in Paris and trained at the Great Ormond Street Hospital in London.

On April 24, 1963, Princess Alexandra herself married Angus Ogilvy , second son of David Ogilvy, 12th Earl of Airlie, at Westminster Abbey in the presence of the entire royal family . Ogilvy rejected the offer of the Queen to the earl and thus remained civil, since in the United Kingdom only the titleholders themselves are noble , but not their relatives. Since her husband was elevated to the personal nobility status as Knight Commander of the Royal Victorian Order ("Sir") in 1989 , Alexandra has been using the courtesy title of " Lady Ogilvy" as his wife .

The connection resulted in two children who, like their father, are not noble, since titles are usually only passed on through the father. Unlike their mother, they do not perform any public duties.

Alexandra's husband, Sir Angus Ogilvy, died of throat cancer in 2004. The princess has since lived alone in Thatched House Lodge , a royal residence in the London Borough of Richmond upon Thames , which the couple rented from the Crown after their marriage.

Princess Alexandra has performed public duties for Queen Elizabeth since the late 1950s. This also includes trips abroad, especially in Commonwealth countries . She represented the Queen at the independence from Nigeria celebrations in 1960.

She is also the patron of a wide variety of organizations in the UK. Her focus is on the field of medicine . From 1964 to 2005 she was Chancellor of Lancaster University , which awarded her an honorary doctorate in music.

Like almost all members of the royal family, Princess Alexandra is Colonel of Honor to a large number of units in all branches of the armed forces in the United Kingdom and other Commonwealth of Nations.

Her full title is: Her Royal Highness Princess Alexandra Helen Elizabeth Olga Christabel of Kent, The Honorable Lady Ogilvy, Royal Lady of the Most Noble Order of the Garter, Dame Grand Cross of the Royal Victorian Order