Succession to the throne (United Kingdom) 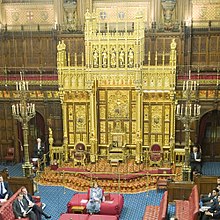 Until the most recent new regulation, all sons of the owner of the throne had the right to the British throne before their daughters in the order of their birth . All descendants of a person entitled to the heir to the throne were ranked directly after this person and before their siblings according to the same rules. The method still used today on the children and grandchildren of Elizabeth II is therefore comparable to depth-first search . For example, Elizabeth II's daughter Anne  (No. 14) and her children (No. 15, 18) are ranked behind Anne's younger brothers Andrew  (No. 8) and Edward  (No. 11) and their children. The daughters (nos. 9, 10) of the second son (nos. 8) of Elizabeth II stand in the line of succession before Elisabeth's third son (nos. 11) and his children (nos. 12, 13).

The following are excluded from the line of succession: 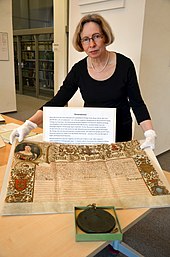 Following a resolution by the Commonwealth of Nations in October 2011 ( Perth Agreement ), the 300-year-old regulation of the succession to the throne has been changed: The only decisive factor is now the order of birth among the siblings, female descendants are no longer ranked after males born later. The equal succession of female descendants to the throne applies to those born after October 28, 2011 and thus does not lead to an advancement of Princess Anne and her descendants.

In addition, potential heirs to the throne may marry a Catholic partner without being excluded from the entitlement to the throne. As the future head of the English state church , however, an heir to the throne must still be an Anglican creed. The reform was decided in April 2013 in the British House of Commons; the decision has been in force since March 26, 2015, after it was ratified by all Commonwealth of Nations.

After around 500 seats, heirs to the throne who do not descend from Queen Victoria are theoretically possible.

The close relationship of the European nobility enables other ruling monarchs to be potential heirs to the throne, including (as of January 1, 2011, exact placement uncertain) King Harald V of Norway (No. 73), King Carl XVI. Gustaf of Sweden (No. 283) and Queen Margrethe II of Denmark (No. 321). The first heir to the throne from a former German aristocratic house is ranked 159th and belongs to the House of Leiningen .