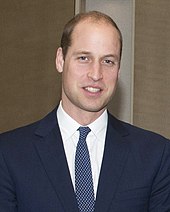 Prince William was the eldest son of Princess Diana ( "Lady Di") and Prince Charles , Prince of Wales at St Mary's Hospital in London district of Paddington born. He is the grandson of Queen Elizabeth II of Great Britain . William has a younger brother, Harry , as well as a stepbrother, Thomas Parker-Bowles, and a stepsister, Laura Parker-Bowles, who are from the first marriage of his stepmother Camilla to Andrew Parker-Bowles. His parents officially separated in 1992. His mother Diana was killed in a car accident in Paris in 1997 .

After his father, Prince Charles, he is second in line to the British throne .

Prince William was baptized on August 4, 1982 in the Music Room of Buckingham Palace by Robert Runcie , Archbishop of Canterbury . His godparents were ex-King Constantine II of Greece , Sir Laurens van der Post , Princess Alexandra , Natalia Grosvenor, Duchess of Westminster , Norton Knatchbull, 8th Baron Brabourne , and Lady Susan Hussey . On March 9, 1997, Prince William was confirmed in the St. George's Chapel in Windsor Castle . He is thus a member of the Church of England , whose head is the Queen.

From 1985 he attended Mrs Mynor's Nursery School . William received his education from 1987 to 1990 at the Wetherby School in London and from 1990 to 1995 at the Ludgrove School in Berkshire . From 1995 to 2000 he attended the elite Eton College . He graduated from school in geography, biology and art history (" A-Level Certificate", roughly comparable to the German Abitur).

In the year after graduating from school, he volunteered for a few months on an aid project in Chile and on a farm in England. In September 2001 William began a four year study of art history at St Andrews University in Scotland . After two years he switched to geography in 2003 , which he successfully completed in June 2005 with a Scottish Master of Arts . His thesis was on the coral reefs of Rodrigues in the Indian Ocean . In autumn 2005 he completed several internships.

On January 8, 2006, he was accepted as an officer cadet in the Sandhurst Military Academy , where his younger brother Harry had been trained since May 2005. In the army he goes under the name William Wales . On December 15, 2006, Prince William left the Sandhurst Academy after successful training. The final parade took place in the presence of Queen Elizabeth II. In this parade, he was appointed lieutenant appointed (Second Lieutenant).

As Second Lieutenant William Wales he served from January 2007 to January 2008 in the Guard Cavalry Regiment " Blues and Royals ". From January to April 2008 he completed a four-month pilot training course with the Royal Air Force . On 17 January 2008 he made his first solo flight and 11 April 2008 William was that at this time the rank of Flying Officer (equivalent to a lieutenant ), had from his father the badge of the Royal Air Force, the so-called wings (English for grand piano). In April 2008, the prince was criticized for several training flights in a military helicopter, as these flights mostly had a private destination, such as the country home of his partner Kate Middleton or the bachelorette party of his cousin, Peter Phillips. In summer 2008, he gained experience on the frigate of the Royal Navy HMS Iron Duke in the Caribbean .

In 2009 and 2010 William completed a 20-month training course as a helicopter pilot at the Defense Helicopter Flying School of the Royal Air Force in Shawbury, West England. There he had the rank of flight lieutenant ( captain ). This training was followed by a service with a " Search and Rescue " unit at the RAF Base Valley on the Isle of Anglesey in Wales, which lasted from 2010 to September 2013. Among other things, he was there in November 2011 as copilot of a rescue helicopter involved in the recovery of shipwrecked people from the sinking of the freighter Swanland . At the beginning of 2012 he had a six-week assignment in the Falkland Islands .

On February 10, 2011, Prince William was appointed Colonel-in-Chief ( Colonel of Honor ) of the Irish Guards .

In September 2013, Prince William decided, a few weeks after the birth of his son, to end his military career and from then on to devote himself primarily to charitable tasks.

William and Catherine on their wedding day on April 29, 2011

Since the end of 2002, Prince William had a relationship with the entrepreneur's daughter Catherine "Kate" Middleton , with an interruption in 2007 . On November 16, 2010, it was announced that the couple had got engaged on a trip to Kenya in October this year . The wedding took place on April 29, 2011 at Westminster Abbey in London. The Kensington Palace was for a conversion to a new home of the couple.

Coat of arms of William, Duke of Cambridge

The prince is always present at community appearances by the royal family, such as Trooping the Color . In 2005 he made a state visit to New Zealand on behalf of the Queen . In 2008 he visited British troops in Afghanistan .

He is the patron or chairman of nine non-profit organizations: Centrepoint (helping the young homeless), The Tusk Trust (helping Africa), The Football Association , The Welsh Rugby Union , The Royal Marsden Hospital , Mountain Rescue , English School's Swimming Association , The Lord Mayor's Appeal, and City Salute Appeal (support for injured soldiers). In December 2009, Prince William spent a night in central London to get a better understanding of how a homeless person lives.

On June 30, 2011, the royal prince and his wife arrived in Canada for their first official trip abroad since their wedding . In the capital Ottawa , the ducal couple celebrated Canada's national holiday on July 1, on behalf of William's grandmother in their capacity as Queen of Canada . Several dozen opponents of the monarchy protested against the visitors from Great Britain in Montreal . As French Canadians, you feel oppressed and demanded the proclamation of a Republic of Canada . On the third day of the Cambridge’s first official overseas visit, separatists protested against the “royal parasites” in French-speaking Québec . During their two-day visit to Québec, the couple felt the widespread rejection of the British crown there. About 200 protesters gathered outside the city hall, where the couple attended an official ceremony. The anti-royalists chanted, among other things, "William, get away" and "Down with the monarchy". The nine-day visit to Canada was immediately followed by a three-day stay in Los Angeles , where a gala for British film and television stars in Hollywood was on the program.

On August 23, 2016, on the 70th anniversary of the founding of North Rhine-Westphalia , Prince William took part in the state celebrations in Düsseldorf as the highest representative of the United Kingdom . From July 19 to 21, 2017, the prince and his family visited Germany for the first time, although the children did not take part in the official program. William and his wife visited Berlin , Heidelberg and Hamburg . They met with Federal Chancellor Angela Merkel and Federal President Frank-Walter Steinmeier , among others . Experts assessed the visit as part of a “ Brexit diplomacy” in order to strengthen ties to Europe despite the exit from the EU. The British Ambassador Sir Sebastian Wood said it was "[...] the beginning of a long relationship between this new generation of the royal family and Germany" and that there will be many such visits in the future.

Prince William at a polo game in Sandhurst (2007)

The prince engages in several sports: he swims, rides, plays tennis , rugby , hockey , soccer , basketball , golf and takes part in polo tournaments. In his school days he was in the swimming team , in the choir and in a theater group. During his studies he was a member of the water polo team at Scottish universities and took part in competitions. Every year he goes skiing with his father, brother and wife in Klosters-Serneus ( Canton of Graubünden ), Switzerland .

On the occasion of his wedding, he was awarded the hereditary peer titles Duke of Cambridge , Earl of Strathearn and Baron Carrickfergus with a certificate dated May 26, 2011 . With Cambridge in England , Strathearn in Scotland and Carrickfergus in Northern Ireland, the three titles refer to locations in the three parts of the United Kingdom.

Orders, decorations and other awards

On May 5, 2008 he was accepted as a Royal Knight Companion in the English Order of the Garter (KG), making him the 1000th member of this order.

On June 25, 2012 he was accepted as a Royal Knight Companion in the Scottish Thistle Order (KT).