Queen Elizabeth in coronation regalia
(painting by Sir Gerald Festus Kelly , between 1938 and 1945) 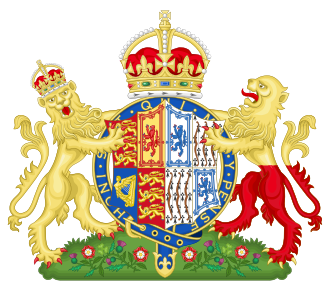 Elizabeth Angela Marguerite Bowes-Lyon (born August 4, 1900 in London , † March 30, 2002 in Windsor ) was the wife of King George VI. and the mother of Queen Elizabeth II.

Because of their marriage, she held the courtesy title of Duchess of York from 1923 to 1936 and was Queen Consort of the United Kingdom and the Commonwealth Realms from 1936 to 1952 . As a Queen Consort , she was not an independent ruling monarch , but was known as Queen Elizabeth . After the death of George VI. In 1952 she was referred to as Queen Elizabeth The Queen Mother (not an official title) to avoid confusion with her daughter Queen Elizabeth II, who had ruled since 1952, and with her mother-in-law Maria von Teck, who was still living at the timeto avoid, who had carried the title Queen Dowager ( Queen Dowager ) since the death of her husband , but had never officially accepted this title. She also found herself too young for the title of queen widow. Since then she has been popularly known as Queen Mum .

Lady Elizabeth was the ninth of ten children of Claude Bowes-Lyon, 14th Earl of Strathmore and Kinghorne , (1855–1944) and his wife, Lady Cecilia Nina Cavendish-Bentinck (1862–1938), a descendant of King Henry VII of England . from the house of Tudor . Elizabeth spent her childhood with her brother David Bowes-Lyon, born in 1902, with her family at Glamis Castle , the Scottish ancestral home of the Bowes-Lyon family.

A governess of German origin taught Elizabeth French and German, both of which she was finally able to speak fluently at the age of ten. On Elizabeth's 14th birthday, Britain entered World War I and Glamis Castle was used as a hospital for wounded British soldiers. Elizabeth worked as an auxiliary nurse. Her family suffered two personal losses during World War I - her brother Fergus Bowes-Lyon was killed in the Battle of Loos in 1915 , another brother, Michael Bowes-Lyon, was captured and later returned to the family seriously wounded.

Marriage to the royal family

In the early 1920s she met Albert, the second son of King George V know. They got engaged on January 1st, 1923. The wedding took place on April 26, 1923 at Westminster Abbey . Albert previously received the title of Duke of York from his father , which is traditionally bestowed on the second son of the English monarch. Elizabeth became the Duchess of York by marriage .

Albert was a very shy and introverted person, who had also suffered from a speech defect that was particularly noticeable during public appearances since his youth . Elizabeth helped him overcome this handicap by introducing him to an unconventional speech therapist, Lionel Logue , who looked after him before and after his accession (the 2010 feature film The King's Speech , in which Elizabeth was portrayed by Helena Bonham Carter , was discussed with this topic).

The Duke and the Duchess of York had two daughters:

George V died in January 1936, and his eldest son Edward automatically became King as Edward VIII . However, an indiscretion leaked that Edward VIII had an affair with the American Wallis Simpson , who had already been divorced twice . Since he intended to marry Mrs. Simpson, and thus provoked a national crisis, Edward found himself forced after only eleven months in office to abdicate in December 1936 and go into exile with Wallis Simpson in Paris. In the severe crisis of abdication that accompanied Edward's decision, Elizabeth proved to be a reliable support to Albert, who had never aspired to the royal office. With the abdication of his older brother he was now the king. On May 12, 1937 Albert was named King George VI. solemnly crowned, the new Queen Elizabeth at his side.

On September 3, 1939, he explained to radio listeners in Great Britain and all Dominions why the Empire was now entering the war against Hitler's Germany . The royal family took an intense interest in the suffering of British soldiers and the civilian population.

Queen Elizabeth and King George VI. during a visit to Canada in 1939

From then on the king and queen stayed in London and encouraged the needy population. The royal couple always got the latest information about bombings and inspected the destruction caused by the German air raids.

When Buckingham Palace was hit in a bombardment of London , the Queen said the legendary words to a soldier the following day: “I am almost glad we have been bombed. Now I feel I can look the East End in the face. " (Eng .: "I'm almost glad we were bombed. Now I have the feeling that I can look the East End in the face.") The East End was hit hardest by the air force bombing. Because of her efforts to raise the morale of the British people, Hitler is said to have named Elizabeth the most dangerous woman in Europe. (An original source for the much-cited sentence does not seem to be found.)

On May 8, 1945, the day the war ended in Europe - in Great Britain "Victory in Europe Day", or "VE Day" for short - the royal couple with their two daughters and the then Prime Minister Sir Winston Churchill (1874-1965) broke up the people frenetically celebrate on the balcony of Buckingham Palace. 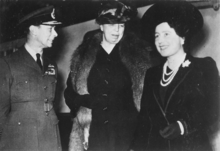 King George VI died on February 6, 1952. at the age of 56 after suffering from cancer. His eldest daughter, who was officially visiting Kenya with her husband at the time of her father's death , returned as Queen and ascended the British throne as Elizabeth II.

Her mother, the only 51-year-old now king widow Elizabeth, withdrew from the public for almost a year. Before that, she let it be known that from now on she was to be referred to as Her Majesty Queen Elizabeth The Queen Mother (Her Majesty Queen Elizabeth, the Queen Mother ). In 1952, she bought the Castle of Mey in the far north of Scotland , which she had restored so that she could retreat there in August and October. 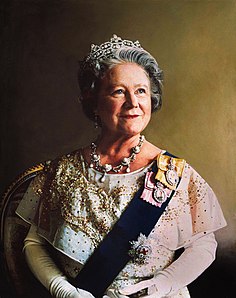 In 1954, the Queen Mother visited the United States and Canada to raise money for a donation from her late husband. Before the trip, Elizabeth said: "Who wants to know anything about a middle-aged royal widow?" However, Queen Mum remained the most popular member of the royal family until her death. From 1978 she carried the honorary title of Lord Warden of the Cinque Ports . 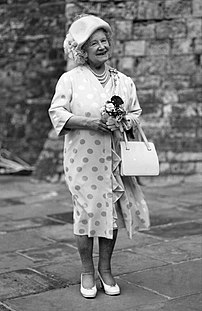 In 1995 and 1997 the queen mother received two artificial hip joints. She made numerous public appearances into old age. At the age of 90, the Queen Mother made a total of 160 public appearances a year, and even in the last year of her life she made 51 public appearances. On August 4th, 2000, she celebrated her 100th birthday, which was celebrated with a large parade through the city center of London. Before her, no member of the royal family had reached this age in the almost millennial history of the British monarchy.

Weakened by a severe bronchial infection, the Queen Mother last attended the funeral of her daughter Margaret, Countess of Snowdon , in February 2002. On March 30, 2002 - 50 years after her husband - she died at the age of 101 at the Royal Lodge near Windsor Castle . She was laid out in Westminster Hall , the great hall of the House of Parliament. Several hundred thousand people said goodbye to Queen Mum there . The official memorial service took place on April 9, 2002 at Westminster Abbey . Several million people flanked the subsequent funeral procession from Westminster Abbey to St George's Chapel at Windsor Castle, where she was buried with her husband.

From 1953 until her death, she resided in Clarence House .