Sarah, Duchess of York , born as Sarah Margaret Ferguson , nickname "Fergie" (born October 15, 1959 in London ), is the divorced wife of the British Prince Andrew , the Duke of York . Through her marriage, she earned the title of Duchess of York. She is also known as the author of the Budgie children's books about a little blue helicopter , which were successfully made into an animated series for British television . 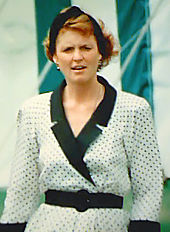 The Duchess of York is the daughter of Major Ronald Ivor Ferguson (1931-2003) and Susan Mary Wright (1937-1998). Her parents were married from 1956 to 1974. Sarah has a sister, Jane Louisa (* 1957). Sarah's mother left the family in 1972 and moved to Argentina with polo player Héctor Barrantes, whom she married in 1975. There she owned a ranch and raised ponies and cattle. She died in a car accident in Argentina in 1998. After the divorce, her father married Susan Deptford in 1975. From this second marriage of the father, Sarah has three half-siblings: Andrew (* 1978), Alice (* 1980) and Elizabeth (Eliza) (* 1985). Her father made a career in the military and worked as the manager of Prince Charles' polo team . Major Ferguson died of cancer in 2003. Through her father, the Duchess descends from Charles Lennox, 1st Duke of Richmond and James Scott, 1st Duke of Monmouth from King Charles II of England .

Sarah had a privileged childhood. She went to boarding school with her sister. She was an avid rider and took part in tournaments. After graduating from school, she attended a secretary school. She then worked in a PR agency, then in a gallery and finally in a publishing house in London. She lived a jet set life and was invited by the royal family to a party at Windsor Castle in 1985. It was there that her relationship with Prince Andrew began. However, she already had contact with the royal family as a child, not least through her father and the common polo sport. 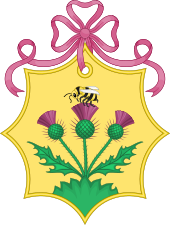 Coat of arms of the Duchess of York, as inherited from her father: In gold, a three-flowered thistle with two leaves at the bottom, a bee on the top flower ; Motto : ex adversis felicitas crescit (from adversity grows joy)

Sarah married Prince Andrew on July 23, 1986 at Westminster Abbey . Through the marriage she carried the title Her Royal Highness, The Princess Andrew, Duchess of York, Countess of Inverness and Baroness Killyleagh until the divorce .

The marriage resulted in two daughters:

In 1992 the marriage was in crisis and Sarah was often seen with other men. In March 1992, the Duke and the Duchess separated. A few months later, images were published in the tabloids of American finance manager John Bryan kissing Sarah's foot. In 1996, Prince Andrew and Sarah divorced . Sarah still bears the title of Duchess of York, but lost her royal rank and the associated title of HRH (Her Royal Highness).

Even after the divorce, Prince Andrew and Sarah continued to look after the daughters together and lived together in Sunninghill Park until 2004 . They are now neighbors on the grounds of Windsor Castle .

Life after divorce from Prince Andrew

After the divorce and a few private affairs, Sarah tried a career with her own talk show , but it was not a great success. She made many appearances on talk shows and television series. She also resides in the United States where she works and does business. She got involved in numerous charitable causes, for example US spokeswoman for SOS Children's Villages . In 1998 she had a guest appearance on the television series Friends in the episode Finally Wedding .

Sarah promoted Weight Watchers , the china manufacturer Wedgwood, and other companies. As a writer , she wrote her autobiography as well as some diet guides and children's books, among other things .

At the beginning of November 2008 she hit the headlines when she publicized grievances in Turkish orphanages . Two ministers of the Turkish government at the time ( Erdoğan II cabinet ) described the publication of the secret evidence as a malicious campaign against the country.