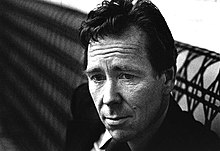 Antony Charles Robert Armstrong-Jones, 1st Earl of Snowdon (known as Lord Snowdon , stage name Snowdon ), GCVO (born March 7, 1930 in London - † January 13, 2017 in Kensington ) was a British photographer and designer . May 1960 to May 24, 1978 the husband of Princess Margaret . He was considered one of the most prominent photographers in Great Britain and was a member of the House of Lords .

His father was the attorney and crown attorney Ronald OL Armstrong-Jones (1899-1966) from an old-established family of the Welsh gentry . His mother Anne Messel (1902–1992) comes from the German-Jewish banking family Messel: One branch of the family had emigrated to England and became part of London society. His great-great-uncle was the Berlin architect Alfred Messel , his mother's brother the London architect and set designer Oliver Messel .

He went to school in Eton and then studied architecture at Cambridge . In 1950 he took part in the Boat Race . After failing the exam twice, he began training as a photographer, which he did not finish either. From 1951 he soon made a name for himself with photos of social outsiders and took photos, among other places, in psychiatric institutions and in slums. He took the first pictures with a brownie box , later he worked with a Leica .

One of his most famous works from this area of ​​his work is a photo of the two-year-old neglected lower-class child Peter Roche. The shot, taken in 1965 as part of a campaign for the British child protection organization National Society for the Prevention of Cruelty to Children (NSPCC) , featured on the cover of the Sunday Times magazine , on billboards and on television, and sparked discussions across the country about national child protection ; The photographer and his model only met again decades later.

At the same time he became a court photographer for the royal family, accompanied Queen Elisabeth II on official trips and took numerous representative photos of members of the royal family. He took over these tasks until the end and was among other things the photographer of the official photo on the occasion of the diamond wedding of Queen Elizabeth and Prince Consort Philip in 2007 .

Later, the focus of his photographic work was in the fields of fashion, design and theater as well as portraits of famous personalities in society, artists and film stars, preferably in black and white. His best-known works of this kind include portraits of Princess Diana , Salvador Dalí and Marlene Dietrich , which were often seen in the stern in Germany .

In 1981 he photographed the cover of Greatest Hits , the best-selling album by the British rock band Queen . Numerous works by Snowdon are in the collection of the National Portrait Gallery in London. On the occasion of the photographer's 70th birthday in 2000, the museum showed a retrospective of his work under the title Photographs by Snowdon: A Retrospective .

Occasionally Snowdon also appeared as a designer and designed, among other things, furniture and dishes. His best-known work in this area was 1960-1963 the design of the bird enclosure in the London Zoo , a collaboration with Frank Newby and Cedric Price . The Snowdon Aviary named after him , a futuristic -looking construction made of nets and steel, has been a listed building since 1998.

He also wrote essays on photography and published photo books. Numerous books have been published on his work. 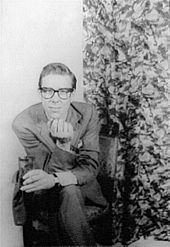 In 1959 he was commissioned to photograph Princess Margaret on her 29th birthday. The two got to know each other; they were married on May 6, 1960 at Westminster Abbey . On October 3, 1961, his sister-in-law Elizabeth II awarded him the titles of Earl of Snowdon and Viscount Linley .

The marriage has two children:

The marriage is said to have been exposed to great stress from the very beginning due to the very different, but equally eccentric and uncompromising personalities of both partners. Snowdon's high professional demands and his wife's dissolute lifestyle also contributed to this. In later years they both had extramarital affairs.

The separation in 1976 had been looming for a long time, followed by a divorce in 1978. With that, Armstrong-Jones was no longer a member of the royal family, but remained the photographer of the royal family despite the divorce. There was also still contact in private.

From 1979 he was married to his assistant Lucy Lindsay-Hogg; the marriage was the result of the daughter Lady Frances Armstrong-Jones (* July 17, 1979), married to the gallery owner Rodolphe von Hofmannsthal, a great-grandson of Hugo von Hofmannsthal . Snowdon and Lindsay-Hogg separated in 2000 and were later divorced. He also had two illegitimate children and lived alone in Kensington . After the consequences of having overcome polio at the age of 16 returned in old age, he was ultimately dependent on a wheelchair , but still professionally active. Antony Armstrong-Jones died on January 13, 2017 at the age of 86. The burial took place on January 20, 2017 in St. Baglan's Church in Llanfaglan, Welsh near Caernarfon .

In 2008, the journalist and author Anne de Courcy published a - partially - authorized biography under the title Snowdon: The Biography with insights into private details, which received great media interest in Great Britain.

From his experience with his own polio in school-age, which earned him a six-month hospital stay and a shortened leg, Snowdon has dedicated himself to supporting disabled students for many decades. In 1981 he founded the charity foundation "The Snowdon Award Scheme", which looks after the promotion and financial support of disabled students and of which he was president. Today the foundation operates under the name "Snowdon Trust".

Due to his hereditary nobility titles as Earl of Snowdon and Viscount Linley , he was a member of the House of Lords from 1961 . In Parliament he was a member of the Crossbencher group. With the House of Lords Act 1999 on November 11, 1999 the direct right of hereditary peers to membership in the House of Lords was abolished. The Earl of Snowdon, like all first holders of a hereditary title, was offered a lifetime membership in the House of Lords. He accepted this and was accordingly raised to Life Peer on November 16, 1999 as Baron Armstrong-Jones , of Nymans in the County of West Sussex . Some members of parliament of the Labor Party criticized him for accepting the title, especially because he rarely attended meetings and, moreover, had achieved peer status not because of special merits, but only through marriage. Since then, he has regularly participated in the meetings, in which he has been the chairman of a working group for the integration of people with disabilities , to represent his main political concern - anti-discrimination of disabled people in everyday life and in society - such as accessibility in public spaces. Since June 2012 he has been on leave of absence for the respective legislative period due to a leave of absence granted by the House of Lords . On March 31, 2016, he retired under the provisions of the House of Lords Reform Act 2014 and left the House of Lords.