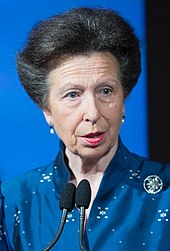 HRH Anne Elizabeth Alice Louise, Princess Royal (born August 15, 1950 in Clarence House , London ) is a member of the British royal family . She is the second child and only daughter of Queen Elizabeth II and Prince Philip after her brother Prince Charles . Princess Anne is the current holder of the Princess Royal title .

At the time of Anne's birth, her grandfather was George VI. King. Her mother Elisabeth was heir to the throne . Thus Anne was third in line to the British throne behind her brother Charles. At the time of her mother's coronation, Anne was second in line to the throne after her brother Charles; With the births of her brothers Andrew (* 1960) and Edward (* 1964) as well as her nephews and nieces, three great-nephews and one great-niece, Anne received lower ranking positions in the British line of succession and is currently fourteen.

By Letters Patent was George V , Anne's great-grandfather, once adopted, that only the children and male grandson of the monarch the title of Prince / Princess and the title "Royal Highness" (Royal Highness) are likely to receive. His son King George VI. Before Charles was born in 1948, however, ordered that all descendants of his daughter Elisabeth, including girls, receive this title and the appropriate salutation, otherwise Anne would have been called Lady Anne Mountbatten.

On the evening of March 20, 1974, a British citizen attempted to kidnap Princess Anne from her Austin A135 vehicle on Pall Mall to extort ransom. He injured several bodyguards and people who approached to protect the princess with his gun. The princess herself refused to follow the kidnapper out of the car and fled across the car. All the injured survived, the kidnapper was caught on site.

Anne has been performing official duties since the late 1960s. She is a rider and has practiced military as a competitive sport for many years . In 1971 she became European champion in the individual competition; four years later she won another silver medal. The following year she took part with the British team at the 1976 Summer Olympics in Montreal. She has been a member of the International Olympic Committee since 1988 . In 1971 she was named Sportswoman of the Year in Great Britain .

Princess Anne was a student at the Spanish Riding School in Vienna.

After their divorce, she married Commander Timothy Laurence on December 12, 1992 . The wedding took place in Scotland in the Church of Crathie near Balmoral Castle , because the Church of England refused the ecclesiastical remarriage of divorced people, while the Church of Scotland allowed it. Her husband is now a Vice Admiral and served in high-ranking staff positions until his retirement in 2011.

The Princess Anne Glacier and The Princess Royal Range in Antarctica are named in her honor.

The princess plays a central role in representing the queen in public. For several years now she has attended most of the appointments of all members of the royal family each year. One focus of her work is the Save the Children organization , of which she has been president since 1970. She has been Chancellor of the University of London since 1981 .

Like almost all members of the royal family, Princess Anne is Colonel of Honor of a large number of units in all branches of the armed forces in the United Kingdom and other Commonwealth of Nations . This includes in particular the Blues and Royals . In this capacity she is by virtue of the Queen's Gold Stick for England and Wales . In 2002 she was the first non-ruling female member of the royal family to wear the Queen Mother's uniform at the funeral of her grandmother Queen Elizabeth , contrary to her mother's express request. Since then she has been taking part in Trooping the Color in uniform every year . 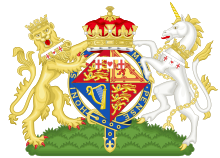